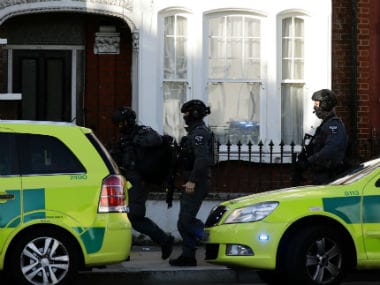 An explosion on an underground train at a station in south-west London on Friday left several commuters injured and caused panic in the area, media reports said.

The British police are treating the incident as an act of terrorism, saying "a number of people" had been injured. "Terrorist incident declared at Parsons Green Underground Station," police said in a statement.

Several people are said to have suffered facial burns after a reported blast in a bucket towards the rear of the District Line train. Some commuters reportedly were trampled and suffered crush injuries in the rush to escape.

"We are aware of an incident at Parsons Green tube station. Officers are in attendance," London's Metropolitan Police had said on Twitter.

We are aware of reports on social media RE #ParsonsGreen. We will release facts when we can - our info must be accurate

London Ambulance also tweeted a statement on the incident in which they said that they "have sent multiple resources to the scene".

The Parsons Green tube station was closed, as well as an entire section of the District Line where it is located. A blast on a train at Parsons Green station injured some people. Reuters

A Metropolitan Police spokesman said, "Police were called at approximately 08:20hrs on Friday, September 15 to Parsons Green Underground Station following reports of an incident on a tube train."

"Officers from the Metropolitan Police Service and British Transport Police are in attendance along with the London Fire Brigade and London Ambulance Service. We would advise people to avoid the area," the spokesperson added.

While the nature of the explosion is not yet known, Met Police bomb squads and fire crews have been rushed to the station along with ambulances. Armed police are also at the scene.

Foreign Secretary Boris Johnson appealed for calm. "I'm afraid my information is limited and it really is important not to speculate at the moment. Obviously, everybody should keep calm and go about their lives in a normal way, as normal as they possibly can," Johnson was quoted as saying by The Telegraph.

Eyewitnesses from shops outside the station have reported seeing people with facial injuries. Many have been told to stay in lockdown until the police gives an all clear.

A Metro reporter at the scene was quoted by the paper as saying that a white container exploded on the train and passengers had suffered facial burns.

She said they were "really badly burned" and their "hair was coming off".

Twitter user @Rrigs posted pictures of a white bucket smouldering on a train.

"There was panic, lots of people shouting, screaming, lots of screaming," he told the Press Association.

"There was a woman on the platform who said she had seen a bag, a flash and a bang, so obviously something had gone off," he said.

"I saw two women being treated by ambulance crews," he said.

BBC correspondent Riz Lateef, who was at the station travelling to work, said there was "panic as people rushed from the train, hearing what appeared to be an explosion.

"People were left with cuts and grazes from trying to flee the scene. There was lots of panic."