A homemade bomb exploded on a packed London subway train during rush hour on Friday, leaving 22 people injured, police and health officials said. None of the injured is thought to be seriously hurt.

Police say the explosion was a terrorist attack, the fifth in Britain this year. Britain's domestic spy agency is helping out in the investigation.

Police were alerted to an incident at 8.20 am local time (0720GMT) after commuters reported a noise and a flash aboard the District Line train at Parsons Green station in the southwest of the city. Chaos then ensued as hundreds of people rushed to get away from danger.

"I ended up squashed on the staircase, people were falling over, people fainting, crying, there were little kids clinging on to the back of me," Ryan Barnett, 25, said of the "absolute chaos" as people tried to leave the station. 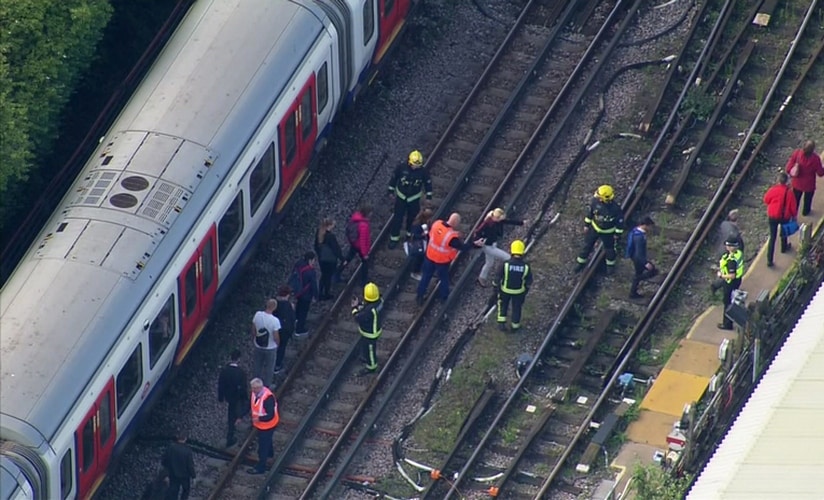 In this aerial image made from video, emergency workers help people to disembark a train near the Parsons Green Underground Station after an explosion at sent commuters stampeding in panic, injuring several people at the height of London's morning rush hour, and police said they were investigating it as a terrorist attack. AP

Mark Rowley, head of counterterrorism for the Metropolitan Police, said "we now assess this was a detonation of an improvised explosive device."

He said 18 people had been injured, most with "flash burns." Health officials later said four others took themselves to hospital.

Rowley said the domestic intelligence service, MI5, was assisting with the investigation, led by the police counter-terrorism unit.

He gave no information about potential suspects, saying "It's very much a live investigation." Forensic officers combed the scene for clues and detectives examined surveillance camera footage in an attempt to get a glimpse at who planted the bomb.

US President Donald Trump tweeted that it was another attack "by a loser terrorist," adding that "these are sick and demented people who were in the sights of Scotland Yard."

Another attack in London by a loser terrorist.These are sick and demented people who were in the sights of Scotland Yard. Must be proactive!

The London police force declined to comment on Trump's suggestion that it knew about the attacker.

Photos taken inside the train show a white plastic bucket inside a foil-lined shopping bag. Flames and what appear to be wires emerge from the top.

London ambulance service said they had sent multiple crews to the Parsons Green station and 18 people were hospitalized, though none had life-threatening injuries. A police vehicle blocks traffic after an explosion at a train at Parsons Green subway station. AP

"There was out of the corner of my eye a massive flash of flames that went up the side of the train," eyewitness Chris Wildish told Sky News, then "an acrid chemical smell."

He said many of those on board were schoolchildren, who were knocked around as the crowd surged away from the fireball.

Another commuter, Richard Aylmer-Hall, said he saw several people injured, apparently trampled as they fled what he described as a packed train.

At capacity, the train could hold more than 800 people.

"I saw crying women, there was lots of shouting and screaming, there was a bit of a crush on the stairs going down to the streets," Aylmer-Hall, said.

Aerial footage later showed commuters from other subway trains being evacuated along the elevated track.

Transport for London said subway services were suspended along the line.

London Mayor Sadiq Khan said the city "utterly condemns the hideous individuals who attempt to use terror to harm us and destroy our way of life."

London has been targeted by attackers several times this year, with deadly vehicle attacks near Parliament, on London Bridge and near a mosque in Finsbury Park in north London. Beyond the capital, a May 22 suicide bomb attack at Manchester Arena killed 22 people.

The London Underground itself has been targeted several times in the past, notably in July 2005, when suicide bombers blew themselves up on three subway trains and a bus, killing 52 people and themselves. Four more bombers tried a similar attack two weeks later, but their devices failed to fully explode.

Last year Damon Smith, a student with an interest in weapons and Islamic extremism, left a knapsack filled with explosives and ball bearings on a London subway train. It failed to explode.

The Paris prosecutor's office says counterterrorism investigators have opened a probe into Friday morning's incident at the Chatelet station in central Paris, based on preliminary examination of the attacker's background.

The knife-wielding assailant tried to attack a soldier with a special military force assigned to protect prominent sites following deadly Islamic extremist attacks. He was quickly arrested and no one was hurt.