By Gabriella Borter and Susan Heavey NEW YORK (Reuters) - Pandemic-weary Americans entered the holiday season on Friday under strong pressure from political leaders and health officials to stay home, avoid most gatherings and curtail Christmas shopping as the coronavirus surged nationwide. One day after the nation celebrated a muted Thanksgiving, malls and retailers imposing strict COVID-19 rules saw fewer Americans in stores for the traditional Black Friday start of the holiday shopping season. 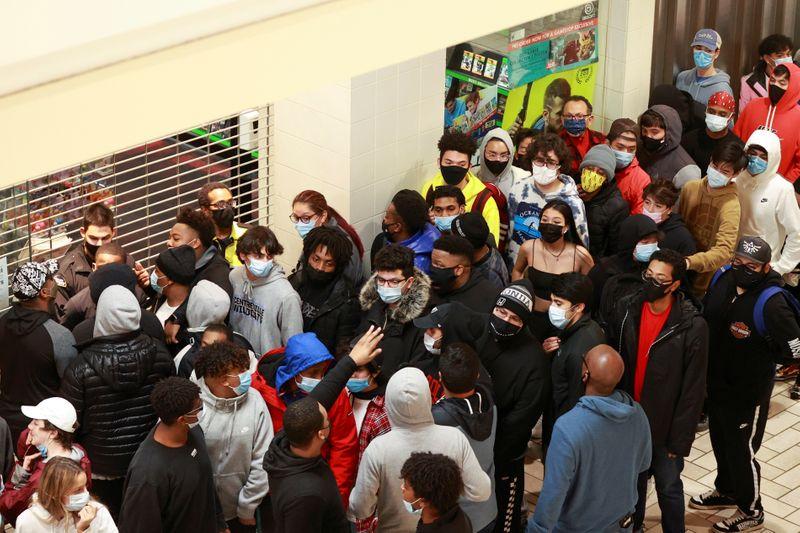 By Gabriella Borter and Susan Heavey

One day after the nation celebrated a muted Thanksgiving, malls and retailers imposing strict COVID-19 rules saw fewer Americans in stores for the traditional Black Friday start of the holiday shopping season.

"Remember, skip the crowds and shop from home this Black Friday," Kentucky Governor Andy Beshear, a first-term Democrat, wrote on Twitter, a sentiment echoed by many state and local officials.

COVID-19 infections and hospitalizations have spiraled in recent weeks, prompting increasingly aggressive clamp-downs in many U.S. states as the country awaits government approval of vaccines developed by drug-makers Pfizer Inc and Moderna.

The U.S. Centers for Disease Control and Prevention will take a formal step early next week toward deciding who gets the first round of vaccine once it is approved, with an advisory committee meeting and vote on the "allocation of initial supplies of COVID-19 vaccine" on Tuesday, according to an agenda posted on its website.

Roughly 90,000 patients were being treated for COVID-19 in hospitals on Friday, a number that has doubled in the last month amid rising infections and is the highest since the pandemic began.

The U.S. Supreme Court late on Wednesday struck down as unconstitutional an order by New York Governor Andrew Cuomo imposing severe limits on the number of people who could worship at churches and synagogues in the state.

The ruling was dismissed by Cuomo as "irrelevant," saying it related to specific areas that were no longer considered at high risk. But it could drive legal challenges against similar rules placed on houses of worship in other U.S. states.

"It is fair to say that this Supreme Court ruling has broader implications and governors would be wise to be guided by it in any attempts to single out houses of worship for disparate treatment," Randy Mastro, lead attorney for the Catholic Archdiocese of Brooklyn in the case, told Reuters.

Some medical centers and intensive care units are already being pushed beyond capacity.

"This is the reality we face when COVID-19 is allowed to spread unchecked – ICUs at capacity, not enough health care workers available," New Mexico Governor Michelle Lujan Grisham said in a tweet.

Grisham, a Democrat, did not say who she believed had let the virus spread unchecked. The governor has imposed a lockdown requiring all "non-essential" businesses to close and residents to stay home.

There were 880 people hospitalized with COVID-19 on Friday in New Mexico. A hospital in rural Curry County was the latest to reach capacity in its intensive care unit earlier this week, according to the county's Facebook page.

Some politicians and health experts have said that Americans traveling for the Thanksgiving holiday could spread the contagion even faster and push the already strained healthcare system to the brink.

Many Americans heeded the advice to stay home for Thanksgiving on Thursday. Others chose to travel, saying they were willing to risk illness to see family members.

On the day before Thanksgiving, typically one of the busiest travel days of the year in the United States, more than 1.07 million people transited through U.S. airports - the most of any single day since the start of the pandemic, according to the Transportation Security Administration.

Nearly 6 million Americans traveled by air from Friday to Wednesday, it said, a number that is however less than half that of the same period last year.