By Debora Moreira and Pedro Fonseca RIO DE JANEIRO (Reuters) - Brazilian President Jair Bolsonaro, who met with President Donald Trump in the United States less than a week ago, has tested negative for coronavirus, a post on his Facebook page said on Friday. Bolsonaro and a large Brazilian entourage, including cabinet ministers, met with Trump and other senior U.S. 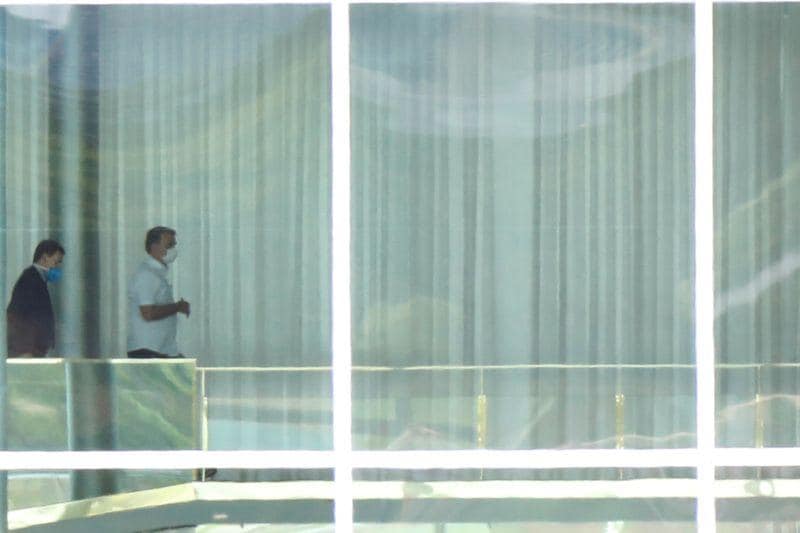 By Debora Moreira and Pedro Fonseca

RIO DE JANEIRO (Reuters) - Brazilian President Jair Bolsonaro, who met with President Donald Trump in the United States less than a week ago, has tested negative for coronavirus, a post on his Facebook page said on Friday.

Bolsonaro and a large Brazilian entourage, including cabinet ministers, met with Trump and other senior U.S. officials last weekend at Mar-a-Lago. One of the party, Bolsonaro's communications secretary Fabio Wajngarten, tested positive for COVID-19 on Thursday and is in quarantine.

"Tests negative for COVID-19 Mr President of the Republic Jair Bolsonaro," said the Facebook post, above an old image of Bolsonaro making an obscene local gesture in an apparent response to some media reports that a first test had been positive.

Bolsonaro's son Eduardo tweeted that his test had also come back negative. The results for others in the Brazilian delegation, including Bolsonaro's wife Michelle and Foreign Minister Ernesto Araujo, have not yet been published. However, Bolsonaro's lawyer, Karina Kufa, who was part of the delegation, has tested positive, according to Brazilian daily O Globo.

"Life continues normally, we have many challenges ahead and many problems to solve," Bolsonaro said outside his official residence.

He waved to supporters but said it was better not to shake their hands.

The testing of Bolsonaro and many in his inner circle has changed the president's tone on a virus that he dismissed on Tuesday as largely a "fantasy."

In a stern address to the nation on Thursday evening, Bolsonaro asked his supporters to call off marches planned for the weekend in order to avoid spreading the disease.

Brazil has confirmed 98 cases of the coronavirus, the Ministry of Health said on Thursday.

"He tested negative full stop," Bolsonaro's son Eduardo later told Fox News. He did not directly answer a question as to whether a first test was positive.

Trump said on Thursday he was "not concerned" about having come into contact with Wajngarten.

The U.S. president will not be tested, the White House said, despite his contact with Wajngarten, beside whom he was photographed at a dinner at Mar-a-Lago.