Libya's NTC faces protesters' wrath as it grapples with transition

Benghazi: Protesters stormed the Benghazi headquarters of Libya's ruling National Transitional Council (NTC) on Saturday while its chairman was still in the building.

People in Benghazi, birthplace of the revolt which forced out former Libyan leader Muammar Gaddafi, have been protesting for weeks to demand the sacking of Gaddafi-era officials and more transparency about how the NTC is spending Libyan assets.

The attack is a serious blow to the self-appointed but internationally recognised NTC, and underscores growing discontent over the way it is running the country. 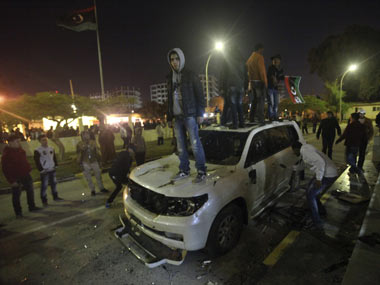 Libyans damage the car of NTC Chairman Mustafa Abdel Jalil to express their dissatisfaction towards the policy of the Council in governing the country. Reuters

Many of those who fought in the nine-month civil war that ended with the capture and killing of Gaddafi in October are unhappy with cash compensations promised by the government, saying it does not cover their basic needs.

On a Saturday, hundreds of young men, many wounded from the war, rallied outside the NTC's headquarters.

When Abdul Jalil, NTC chairman, came out in an attempt to address the crowd, some protesters hurled empty plastic bottles at him, prompting security forces to fire tear gas.

"Go away, Go away," the protesters chanted as Abdul Jalil spoke. He then went back into the building but he is believed to have been pulled to safety from a back door when the crowd charged into the building.

Protesters threw stones and metal bars at the building, breaking its windows, before storming the headquarters. One protester left the building carrying a set of loudspeakers and screaming: "Spoils of war!"

"A large number of wounded people were unhappy because the National (Transitional) Council has not met their demands," said 30-year-old Tareq al-Gheryani as he watched people attacking the NTC's headquarters.

"People are not happy with the council because it has also given government posts to people who are known to have links with Gaddafi."

Interim government officials say it is impossible for them sack hundreds of officials merely because they served under Gaddafi, but stress that those proved to have been involved in human rights abuses or financial fraud will be fired.

The NTC is grappling with problems, including the disbanding of dozens of powerful militias that effectively control the country. The ministries of interior and defence want to integrate them into a military and police force, but militia chiefs have shown little interest in surrendering their arms.

On Thursday, Abdul Hafiz Ghoga, vice president of the NTC, was roughed up by university students in Benghazi. He was surrounded by a crowd and jostled before he was pulled away to safety.