Tripoli: Pinned down in the centre of the coastal city of Sirte, Islamic State group jihadists Thursday stepped up suicide bomb attacks on forces of Libya's unity government who suffered 10 dead.

The focus of IS counter-attacks has been aimed at retaking Sirte's port and western sectors of the city, the hometown of late dictator Muammar Gaddafi, military sources said.

Jihadist groups took root in Libya in late 2014, taking advantage of the chaos and power struggles that followed the NATO-backed uprising that toppled and killed Gaddafi in 2011. 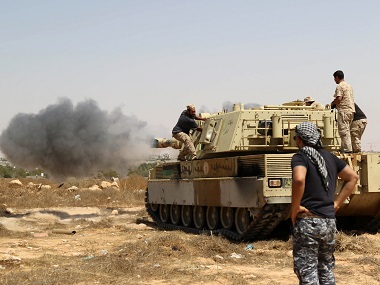 Forces loyal to Libya's UN-backed unity government fire from a tank in Sirte's centre towards Ouagadougou as they advance to recapture the city from the Islamic State. AFP

"A suicide attack using a booby-trapped car targeted the Abu Grein checkpoint," the forces of the Government of National Accord said in a statement sent to AFP.

IS claimed responsibility for two suicide bombings against pro-GNA forces on Thursday, without mentioning Abu Grein.

It was unclear if these were the same attacks the GNA forces announced on Thursday morning, since they have not specified the location of the two attacks.

Forces allied to the GNA captured the town of Abu Grein on 17 May as they advanced on Sirte, the jihadists' stronghold in Libya, 130 kilometres (80 miles) to the east.

Thirty-two people were killed and 50 wounded in a car-bomb attack in Abu Grein the next day targeting the forces allied with the GNA.

Ten members of the pro-GNA forces were killed and seven wounded in Thursday's blast at Abu Grein, said sources at the central hospital in Misrata, from where they launched an offensive against the jihadists.

The military command of the anti-IS operation said two other car-bombings inside Sirte itself were foiled on Thursday.

"Our forces managed to destroy two car bombs before they reached their targets," it said.

"The two cars had targeted positions of our forces on two fronts."

The jihadists have mounted eight suicide car bombings against pro-GNA forces since Sunday, as they intensify efforts to regain lost ground in the Mediterranean city.

The pro-GNA forces backed by air strikes entered the city last week, aiming to drive the extremist group out of its bastion on Europe's doorstep.

But the advance has been stalled since Sunday on the outskirts of Sirte's residential areas where the jihadists are holed up.

Established in Tripoli more than two months ago, the UN-backed unity government has been struggling to exert its control over the North African country, which is awash with weapons.

The operation to retake Sirte has so far left 165 pro-GNA fighters dead and more than 500 wounded, according to an AFP count based on reports from medical officials.

Unity government head Fayez al-Sarraj said this week that the GNA forces' advances in Sirte should be a model for "a national initiative to fight terrorism".

His task is complicated by the presence of a parallel government operating out of eastern Libya, backed by local militias and units of the national army loyal to a controversial general, Khalifa Haftar.

Haftar, who is also a fierce opponent of Islamists, refuses to recognise the GNA and considers its forces "militias outside the law".

Analysts have warned that Sirte's fall would not spell the end of the jihadists in Libya.

Foreign intelligence services estimate the extremist group has 5,000 fighters in Libya, but its strength inside Sirte, which IS has held since June 2015, is unclear.