By Carlos Barria and Bryan Woolston LOUISVILLE, Ky. (Reuters) - A civil rights lawyer representing Breonna Taylor's family on Friday demanded Kentucky's state attorney general release the evidence presented to a grand jury that decided against charging police officers with homicide in her death during a botched raid. 'Release the transcripts!' Ben Crump said, leading Taylor's relatives and others in a chant outside the grand jury building and questioning whether Kentucky Attorney General Daniel Cameron presented the grand jury with enough evidence against the officers. 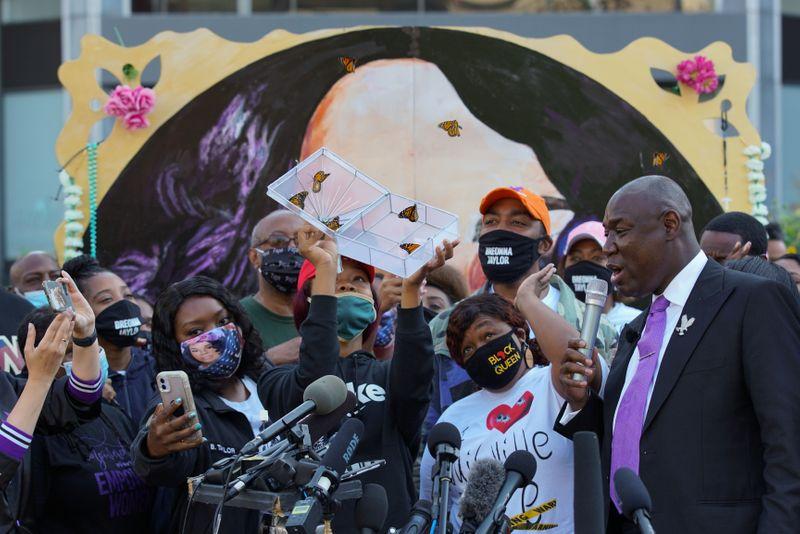 By Carlos Barria and Bryan Woolston

"Release the transcripts!" Ben Crump said, leading Taylor's relatives and others in a chant outside the grand jury building and questioning whether Kentucky Attorney General Daniel Cameron presented the grand jury with enough evidence against the officers.

"There seems to be two justice systems in America. One for Black America and one for white America," Crump said.

In the U.S. justice system, prosecutors present findings in secret to a panel known as a grand jury that must decide if the evidence is enough to show a crime was committed and sufficient to charge a suspect.

Since there are no presentations by attorneys for the suspect, the system gives prosecutors wide leeway in guiding the grand jury's decision-making.

Protests erupted in Louisville and other American cities following Wednesday's announcement that the grand jury would not bring homicide charges against police officers involved in the fatal March 13 shooting of Taylor in her home during the execution of a search warrant.

Instead, one officer was charged with wanton endangerment for stray bullets that struck a neighboring apartment.

Taylor's slaying initially drew little national attention. But it was thrust into prominence after George Floyd, a Black man arrested for a non-violent offense in Minneapolis, died under the knee of a white police officer on May 25, igniting a summer of protests against racial injustice and excessive police force.

Taylor, 26, a Black emergency medical technician and aspiring nurse, was struck by six bullets moments after she and her boyfriend, Kenneth Walker, were roused from bed in the commotion of the raid.

Walker fired one shot, wounding a police officer, saying he did not hear police identify themselves. Three officers responded by firing 32 rounds.

Crump, who has represented several families in high-profile cases of police killings, helped Taylor's family win a $12 million settlement from the city of Louisville in a wrongful death lawsuit.

Crump said the Taylor family was "heartbroken, devastated, outraged and confused" about what evidence Cameron presented to the grand jury, questioning whether Cameron, a Black Republican, was attempting to protect the police.

"Did he (Cameron) present any evidence on Breonna Taylor's behalf or did he make a unilateral decision to put his thumb on the scales of justice, to help try to exonerate and justify the killing of Breonna Taylor by these police officers?" Crump asked.

Cameron has declined to release the grand jury evidence, in part because a federal investigation was ongoing apart from the state case.

"Releasing that information now would compromise the federal investigation and violate a prosecutor's ethical duties," Elizabeth Kuhn, Cameron's spokeswoman, said in an email on Thursday.

Kuhn did not immediately respond to another Reuters request for comment in response to Crump's news conference.

In the second night of Louisville protests following the decision, Thursday night and Friday morning were relatively calm after two police officers were shot and wounded the previous night.

Police said on Friday they had arrested 24 people including state Representative Attica Scott, the only Black woman in the Kentucky legislature. She is also a sponsor of the proposed "Breonna's Law," which would end "no-knock" warrants and require police to wear body cameras while warrants are served. The bill is due to come up in the 2021 session.

Scott was accused of felony first-degree rioting in addition to misdemeanor offenses of failure to disperse and unlawful assembly, police said.

All three were released Friday morning after spending the night in jail, said Ted Shouse, an attorney for Parrish-Wright. They were arrested together when somebody nearby broke the window of a library and threw a flare into the building, but neither Parrish-Wright nor the Scotts were involved, Shouse said.

"These charges are outrageous," Shouse said, adding that Scott and Parrish-Wright are longtime friends who have been active in the social justice movement for years. "Does anybody really think these women would participate in setting fire to a public library?"

Attica Scott said the charges against her and her daughter, of setting fire to a library, were "ridiculous." She also said she was detained before the curfew went into effect at 9 p.m.