Latam neighbours willing to use sanctions on Venezuela's Maduro, but not force 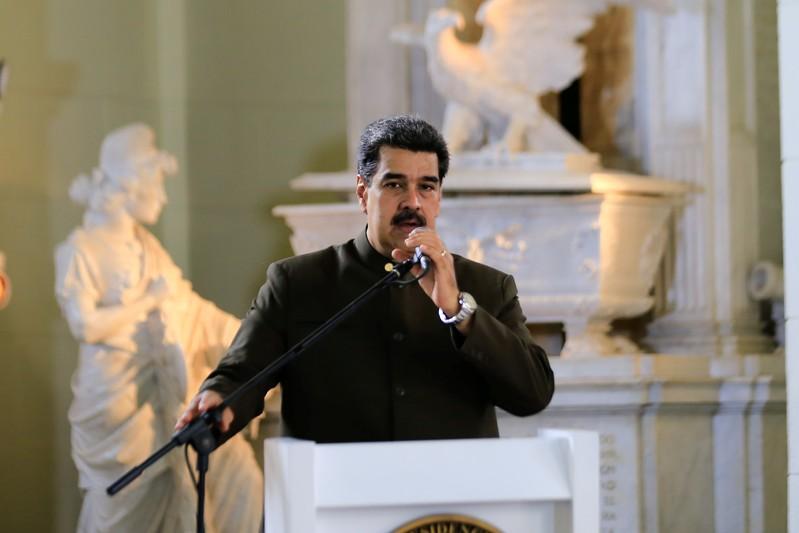 UNITED NATIONS (Reuters) - Latin American countries on Monday said they are willing to implement sanctions to force out Venezuelan President Nicolas Maduro but expressed deep reservations about any use of force.

The Lima Group, which includes Argentina, Brazil, Colombia and Peru, did not specify what type of sanctions. But in a joint statement, the countries made clear that they did not support a military intervention to oust Maduro.

“We do not support any invocation to the use of force or military interventions,” Peruvian foreign minister Nestor Popolizio told reporters after the meeting in New York, where world leaders are gathering for the annual United Nations General Assembly.

Opposition leader Juan Guaido has been recognised as Venezuela’s leader by the United States and most Western countries since January, but Maduro retains the recognition of the 193-member U.N. General Assembly.

Guaido's team is hoping to use the U.N. gathering to rally more support after months of stalemate and failed talks.

Guaido's chief diplomat, Julio Borges, said on Monday that U.S. President Donald Trump's attendance at a meeting solely about Venezuela on Wednesday was a “clear sign” that pressure on Maduro would increase.

Peru, Chile and Costa Rica have proposed an amendment to the Rio Treaty — a Latin American mutual defence treaty invoked by members of the Organization of American States earlier this month in response to Venezuela’s crisis — to rule out the use of force.

The United States opposes an amendment, with Trump repeatedly saying that “all options are on the table” to oust Maduro, whose socialist government is struggling with an economic and humanitarian crisis.

“There’s no reason for us to limit ourselves at the outset,” Carrie Filipetti, deputy assistant U.S. Secretary of State for Cuba and Venezuela, told reporters.

“We’ve been very clear that our intention with the Rio treaty is to focus on economic and diplomatic pressure options so that we can avoid a military intervention in the future.”

A meeting of signatories to the Rio Treaty on Monday afternoon is likely to lead to “wider implementation” of sanctions on Venezuela, a senior U.S. State Department official said.

Many Latin American countries do not have legal mechanisms to implement sanctions or travel bans on Venezuelan officials, and the treaty could provide them with one, the official added.