Lamborghini, Ferrari not enough, Dubai cops to get Bentley, Merc too

Cash-rich Dubai police has added Aston Martin, Bentley and Mercedes to its existing fleet of luxurious super cars which includes Ferrari and Lamborghini, making it the most stylish security force in the world.

Following recent unveilings of a Ferrari FF and a Lamborghini, the force has shown off new cars from luxury UK auto maker Aston Martin, Bentley and Mercedes. 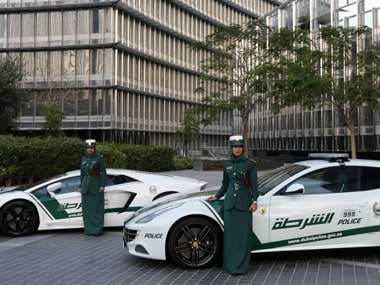 The Aston Martin One-77, Bentley Continental GT and Mercedes SLS have been launched at the Arabian Travel Market, ArabianBusiness reported.

Last month, Dubai's police chief said that a number of Ferraris to be introduced to the force will be driven by female officers.

Commander-in-Chief of Dubai Police Lieutenant General Dahi Khalfan had tweeted that he expected to see Dubai Police's female recruits getting behind the wheels of the Ferrari FF supercar, which costs about USD 500,000 and has a top speed of 335 kmph.

Last month, the department made the announcement via Twitter, "Ferrari joins # Dubai_Police patrol fleet," the police tweeted. The twitter page also had an online link to the picture of the car."Ferrari cars will be equipped with the latest technology needed by the police to control road movement and ensure safety and security on Dubai roads," Lt-General Khalfan had said.

Earlier, Dubai Police also revealed its new AED2m ($500,000) Lamborghini which can reach speeds of up to 350 kmph.

Meanwhile, an environment-friendly car from S S Lootah has also been introduced to the Dubai Police fleet as it will improve safety works.

Lt-Gen Khalfan said the new vehicle would help support the polices' efforts in preserving the security of the UAE residents and will provide fast service when required, especially at events when early intervention and protection of life and properties is needed.