Islamabad: Pakistan on Saturday said that Zaki-ur-Rehman Lakhvi, a key planner of the 2008 Mumbai attack, has not been released from jail and a petition challenging the bail given to him is being firmed up.

"Lakhvi has not been released and the government is reviewing a petition against the bail given by the court," Sartaj Aziz, foreign affairs and national security advisor to Prime Minister Nawaz Sharif, told media. 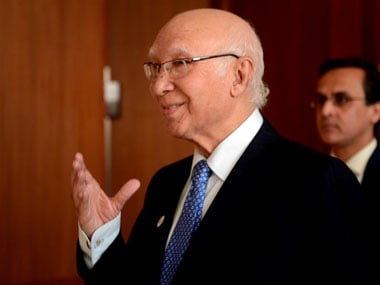 Aziz also brought up the issue of 2007 Samjhauta Express blast that left nearly 70 people, mostly Pakistanis, dead, expressing hope that India would show progress in the trial of the case.

To a question, Aziz said serious efforts are required to resume the stalled Pakistan-India dialogue.

Lakhvi, a key planner of the 2008 Mumbai attack, was yesterday detained by Pakistani authorities for three more months under Maintenance of Public Order (MPO) after he was granted bail by a court that caused an outrage in India.

Lakhvi was granted bail by Islamabad Anti-Terrorism Court on December 18 citing lack of evidence against him, days after Taliban massacred 148 people, mostly schoolchildren, in Peshawar.