Kremlin, after summit, says no offensive planned in Syria's Idlib

By Vladimir Soldatkin and Andrew Osborn SOCHI/MOSCOW (Reuters) - President Vladimir Putin said on Thursday that Russia, Turkey and Iran had agreed to take unspecified extra steps to clear Syria's Idlib region of what he called 'a hotbed of terrorists,' but the Kremlin said there would be no military operation there. Putin, one of Syrian President Bashar al-Assad's closest allies, was speaking after hosting a summit in southern Russia to weigh the future of Syria with Turkish President Tayyip Erdogan and Iranian President Hassan Rouhani. All three countries have forces on the ground in Syria, where they have coordinated their efforts despite sometimes differing priorities and interests 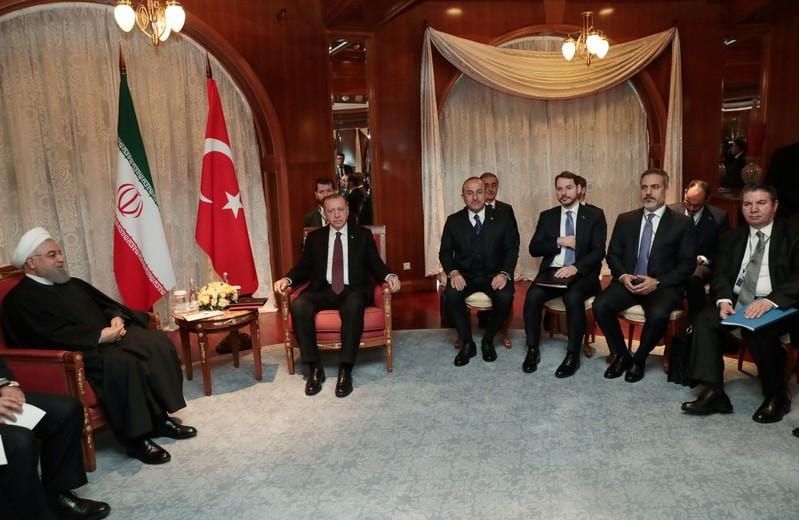 By Vladimir Soldatkin and Andrew Osborn

SOCHI/MOSCOW (Reuters) - President Vladimir Putin said on Thursday that Russia, Turkey and Iran had agreed to take unspecified extra steps to clear Syria's Idlib region of what he called "a hotbed of terrorists," but the Kremlin said there would be no military operation there.

Putin, one of Syrian President Bashar al-Assad's closest allies, was speaking after hosting a summit in southern Russia to weigh the future of Syria with Turkish President Tayyip Erdogan and Iranian President Hassan Rouhani.

All three countries have forces on the ground in Syria, where they have coordinated their efforts despite sometimes differing priorities and interests.

But tensions between Moscow and Ankara over Syria have risen in recent months, fuelled in part by a planned withdrawal of U.S. forces which promises to free up territory controlled by U.S. or U.S.-backed forces, spurring a race to fill the vacuum if and when it opens up.

Before the summit, the Kremlin had made clear it wanted a green light for action in Idlib where it says Islamist militants have made significant inroads despite the area's technical status as a Moscow- and Ankara-backed demilitarised zone.

"...We should not put up with the presence of terrorist groups in Idlib," Putin told Erdogan and Rouhani. "That's why I propose we consider practical concrete steps that Russia, Turkey and Iran can take to completely destroy this hotbed of terrorists."

At the summit's close, Putin said the three countries had agreed to take unspecified extra steps, a formula used at previous meetings, but did not say what they were. Dmitry Peskov, Putin's spokesman, told Russian news agencies that no new military operation against Idlib had been agreed on.

Rouhani had said he backed tough action, but Erdogan was more circumspect.

He did not respond to Putin's suggestion of a joint plan in his opening remarks, and after the summit said that Turkey would continue to do all it could to stabilise Idlib. But he also repeated a warning he has often made about the need not to spark a humanitarian catastrophe there.

Moscow is keen to help Assad retake territory from rebels and militants, including eventually the northwestern Idlib province, but Ankara, which has called for the Syrian leader to leave power, has so far successfully pushed back.

It brokered a deal with Russia in September to enforce a demilitarised zone in Idlib. The agreement, which envisaged clearing the province of heavy weapons and jihadists, helped avert a Syrian government assault on the region, the last major bastion of Assad's opponents after almost eight years of war.

But Moscow has since complained that Turkey has not done enough to keep its side of the bargain and that Islamist militants who used to belong to the Nusra Front group have seized control of much of Idlib.

Putin's difficulty however has been persuading Erdogan to sign off on what would be a Russian-backed Syrian government offensive in a region that borders Turkey.

Ankara is concerned about potential refugee flows from Idlib in the event of a military operation, and wants to retain its influence there.

It also does not want developments in Idlib to distract from its own plan to set up a safe zone in the northeast of Syria.

Turkey's plan to create that safe zone has also stirred tension with Moscow.

It wants the area near the Turkish border to be cleared of the U.S.-backed Kurdish YPG militia and to move into territory there, some of which is currently controlled by U.S. forces.

Earlier on Thursday, Russia told Turkey it had no right to create such a safe zone unless it sought and received the consent of Assad.

"The question of the presence of a military contingent acting on the authority of a third country on the territory of a sovereign country and especially Syria must be decided directly by Damascus," Maria Zakharova, a spokeswoman for Russia's Ministry of Foreign Affairs, said in answer to a question about the Turkish safe zone plan. "That's our base position."

After Thursday's summit, Erdogan said Russia, Turkey and Iran were "on the brink" of taking certain steps east of the River Euphrates. He did not say what they were.