By Ahmed Rasheed and Ahmed Aboulenein BAGHDAD (Reuters) - The killing of Islamic State leader Abu Bakr al-Baghdadi is of considerable importance, experts believe, but the underlying reasons for his jihadist group's existence remain and attacks in the Middle East and beyond are not likely to stop. Baghdadi's death at the hands of the United States is likely to cause Islamic State to splinter, leaving whoever emerges as its new leader with the task of pulling the ultra hardline group back together as a fighting force 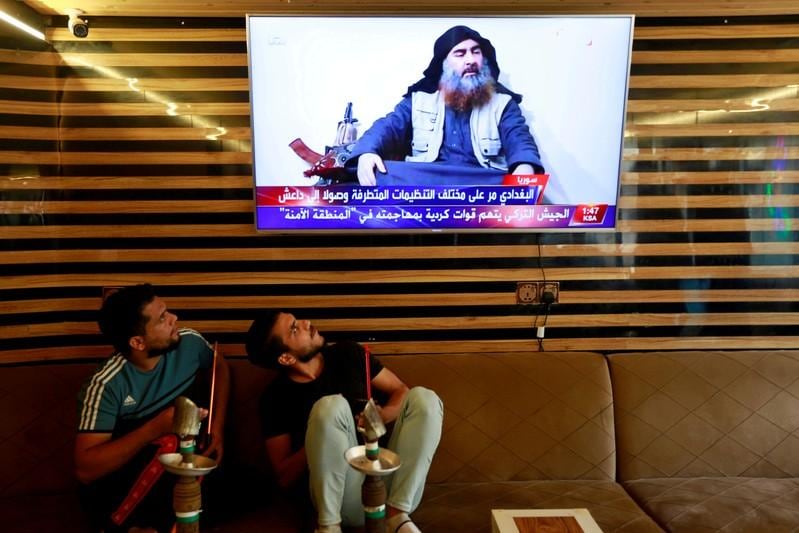 BAGHDAD (Reuters) - The killing of Islamic State leader Abu Bakr al-Baghdadi is of considerable importance, experts believe, but the underlying reasons for his jihadist group's existence remain and attacks in the Middle East and beyond are not likely to stop.

Baghdadi's death at the hands of the United States is likely to cause Islamic State to splinter, leaving whoever emerges as its new leader with the task of pulling the ultra hardline group back together as a fighting force.

Whether the loss of its leader will in itself affect the group's capabilities is open to doubt, analysts in the region say. Even if it does face difficulties in the leadership transition, the underlying ideology and the sectarian hatred it promoted remains attractive to many.

Where once they rode around in armoured vehicles, brandished rifles, flew black flags and indulged in acts of spectacular cruelty, the Sunni Muslim militants are now prisoners or scattered stragglers whose leader was chased down in a tunnel during a raid by American special forces.

"Operationally it doesn't affect much, they are already broken and globally their attacks have receded," said Rashad Ali, resident senior fellow at the Institute for Strategic Dialogue, a London-based think-tank. "They are mostly concentrated in the Iraqi-Syria borderlands."

"It doesn't make much of a difference other than the symbolism," he said. "If you think taking out one terrorist (matters) while failing to address the root causes that led this ideology to take hold, you are mistaken."

But some of those grievances are very much on show today. Sunni Muslims in Iraq are angered at their treatment by a ruling Shi'ite elite they see as under the influence of Iran and the Iranian-backed militias that now roam their provinces unchecked.

In Syria, recruitment to groups such as Islamic State is encouraged by the killing of Sunnis by Syrian government forces backed by Iran and Russia.

Islamic State's effectiveness arises from its members' loyalty to its ultra-fanatical Islamist ideology, and this may not be much affected by the killing of its leader, said Fadhil Abu Ragheef, an Iraqi political analyst and security expert.

He said Islamic State's 9-man Shura Council, or leadership group, was expected to meet and appoint a leader from among five candidates.

Among the front runners are Abu Abdullah al-Jizrawi, a Saudi, and Abdullah Qaradash, an Iraqi and one of Baghdadi's right-hand men, also a former army officer under Saddam Hussein. Also mentioned is Abu Othman al-Tunisi, a Tunisian.

"The new leader will start working to pull together the group's power by relying on new recruits and fighters who fled the prisons in Syria. He is expected to launch a series of retaliatory attacks for the killing of Baghdadi," said Abu Ragheef.

It is possible that whoever takes over as the head of the group, which experts say has been beset by internal disputes, will cause it to splinter within months because he is unacceptable on grounds of nationality to some factions.

"For sure they will fight among themselves over resources. I predict the Iraqi faction will win because they have more money," said Iraqi analyst Hisham al-Hashemi, an expert on jihadist groups.

A security source with knowledge of militant groups in Iraq said the killing of Baghdadi would splinter the group's command structure because of differences between senior figures and lack of confidence among group members who were forced to go underground when the caliphate collapsed.

"We are aware that killing Baghdadi will not lead to the disappearance of Islamic State because eventually they will pick someone for the job," the source said. "But at same time whoever follows Baghdadi will not be in a position to keep the group united."

The new leader will attempt to restructure the group by encouraging followers to launch operations not only in Iraq but in other countries to raise morale among existing and new followers, the source said.

By franchising its name, Islamic State has attracted followers in Africa, Asia and Europe. Incidents such as one in London, where attackers used easily obtained weapons such as motor vehicles and knives, show that lack of organisational backing is not an obstacle.

In South East Asia, where Islamic State has spread its influence, officials believe the group's ideas will have to be fought even after Baghdadi's death.

"What we are most worried about now are 'lone wolf' attacks and those who are self-radicalised through the internet. We are still seeing the spread of IS teachings online. IS publications and magazines from years ago are being reproduced and re-shared," he said.

In Iraq, where Baghdadi proclaimed his caliphate from the Grand al-Nuri Mosque in 2014, authorities have pursued a policy of taking out senior Islamic State figures as an effective way of keeping the group on the back foot.

Hashemi argues that more is needed.

"They have the ability to regroup. The way to stop that is through real fostering of democracy and civil society, truly addressing grievances, in short, creating an environment that repels terrorism," he said.

"Killing leaders is definitely a good thing but it does not prevent their return, only creating such an environment does," he added.