Justice Ginsburg to be honored at U.S. Supreme Court, Capitol

By Lawrence Hurley WASHINGTON (Reuters) - The body of late Justice Ruth Bader Ginsburg, who died last week at age 87, will lie in repose outside the U.S. Supreme Court on Wednesday and Thursday so members of the public can pay their respects before she lies in state at the U.S. 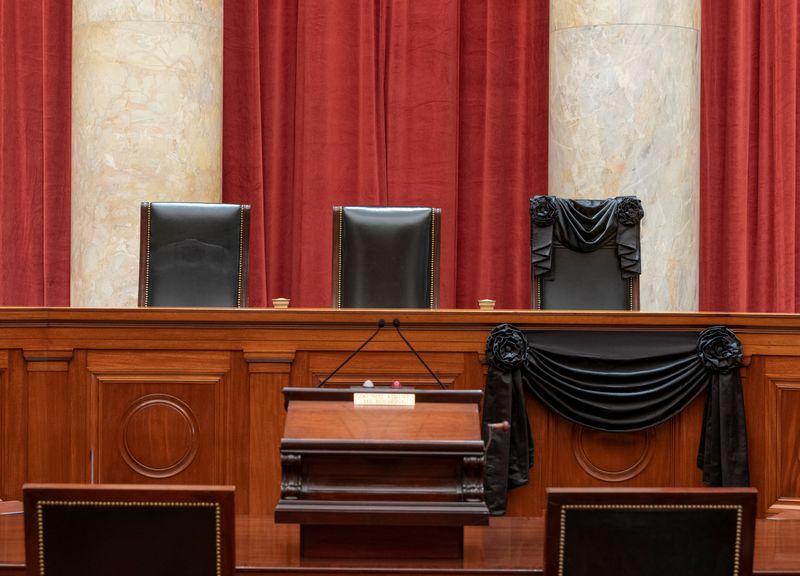 WASHINGTON (Reuters) - The body of late Justice Ruth Bader Ginsburg, who died last week at age 87, will lie in repose outside the U.S. Supreme Court on Wednesday and Thursday so members of the public can pay their respects before she lies in state at the U.S. Capitol on Friday.

There has been an outpouring of public mourning for the trailblazing liberal justice, who became a pop culture icon in recent years, even as President Donald Trump and his fellow Republicans who control the Senate seek to replace her with a conservative jurist before the Nov. 3 presidential election.

Crowds have gathered outside the court building, leaving flowers and other items in tribute, since her death on Friday from complications of pancreatic cancer.

A private ceremony will take place at the court on Wednesday morning, attended by Ginsburg's family, friends and other Supreme Court justices, a court statement said on Monday. Some of Ginsburg's former law clerks will serve as honorary pallbearers and will be lined up on the court's steps when the casket arrives.

In keeping with court tradition, similar ceremonies were held in 2019, when retired Justice John Paul Stevens died, and in 2016, when Justice Antonin Scalia died.

Ginsburg's casket will be placed outside, under the court's portico, in a break from tradition prompted by coronavirus-related health concerns. Usually the casket of a deceased justice is placed in the court building's Great Hall, where the public can view it.

On Friday, the casket will be placed in the National Statuary Hall in the Capitol building, House of Representatives Speaker Nancy Pelosi said in a separate statement. A private ceremony will be held, Pelosi added.

There will be a private interment ceremony at Arlington National Cemetery in Virginia next week, the court statement said.

Trump said on Monday he will announce his pick to replace Ginsburg by the end of the week. If the Senate confirms his nominee, it would leave the court with a solid 6-3 conservative majority.