By Jonathan Stempel and Tom Hals NEW YORK (Reuters) - A federal appeals court on Friday expressed deep skepticism toward Donald Trump's arguments against letting Manhattan's top prosecutor obtain his tax returns in connection with a criminal probe into the U.S. president and his businesses. With the presidential election looming, a panel of the 2nd U.S 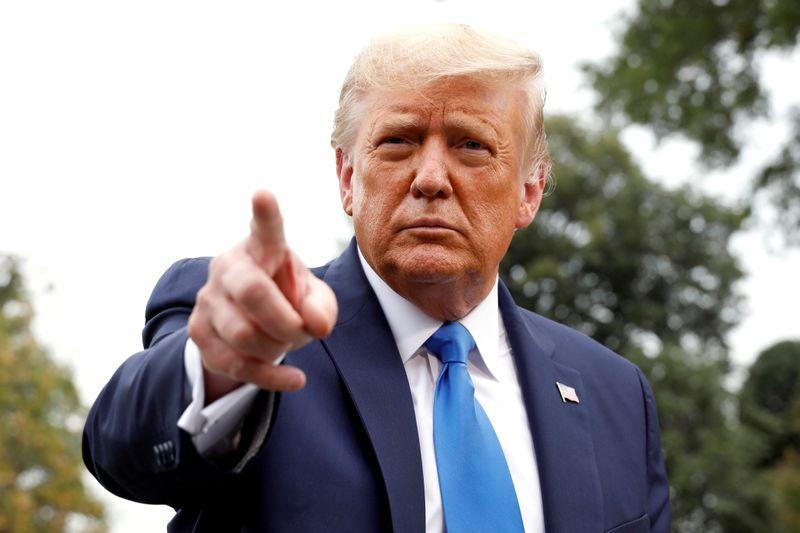 By Jonathan Stempel and Tom Hals

NEW YORK (Reuters) - A federal appeals court on Friday expressed deep skepticism toward Donald Trump's arguments against letting Manhattan's top prosecutor obtain his tax returns in connection with a criminal probe into the U.S. president and his businesses.

With the presidential election looming, a panel of the 2nd U.S. Circuit Court of Appeals in Manhattan repeatedly challenged assertions that Manhattan District Attorney Cyrus Vance's subpoena for Trump's tax returns was overbroad and issued in bad faith to harass the president.

Trump's lawyer William Consovoy accused Vance of pursuing an improper "worldwide audit" of the tax returns, telling the three-judge panel, "If you were to look up the definition of a fishing expedition, this is it."

But when asked by Circuit Judge Raymond Lohier for a circumstance where Trump would not view a document request as overbroad, Consovoy could not offer one.

Trump, a Republican, is fighting an August 2019 grand jury subpoena from Vance, a Democrat, to his accounting firm Mazars USA for eight years of his corporate and personal tax returns.

He is appealing an Aug. 20 ruling from U.S. District Judge Victor Marrero allowing Vance to obtain his tax returns.

The appeal comes after the U.S. Supreme Court on July 9 rejected Trump's claim he was absolutely immune from criminal probes while in the White House, but said he could raise other challenges to Vance's subpoena.

Trump has said he expects a return to the Supreme Court if the appeals court rules against him, as it did in November. It is unlikely the public will know what is in his returns before the Nov. 3 election.

All three judges on the appeals court panel were appointed by Democratic presidents.

The district attorney has said in court filings he might now have grounds to investigate Trump and his businesses, which include the Trump Organization, for tax and insurance fraud, and that possible bank fraud might also be examined.

While grand juries may examine matters beyond those for which they were originally convened, Consovoy said the appeals court should credit Trump's claim that Vance was still focused on the Cohen payments.

"Are you asking us to change the way grand juries have done their work for time immemorial, just because we're dealing with someone who's president of the United States?" Circuit Judge Robert Katzmann asked Consovoy.

"We are not," Consovoy said. "We are asking for the ordinary rules of when subpoenas are being challenged to be extended to the president [and not] be told his claims are implausible, when they are in fact quite plausible."

In response, Vance's lawyer Carey Dunne said there was "nothing unusual" about his office examining a wide range of transactions, reflecting New York's status as a global commercial center.

Dunne said Vance never maintained that the grand jury probe was limited to the Cohen payments, has consistently and publicly stated it was broader, and that Trump knew "throughout the investigation" it was broader.

Moreover, Dunne said recipients of subpoenas have no right to go to court and "demand to know what it's all about."

In his ruling, Marrero said Trump could effectively get the immunity the Supreme Court rejected if the litigation caused statutes of limitations to run out.

"Justice requires an end to this controversy," Marrero wrote.

(Reporting by Jonathan Stempel in New York and Tom Hals in Wilmington, Del.; Editing by Noeleen Walder and Matthew Lewis)