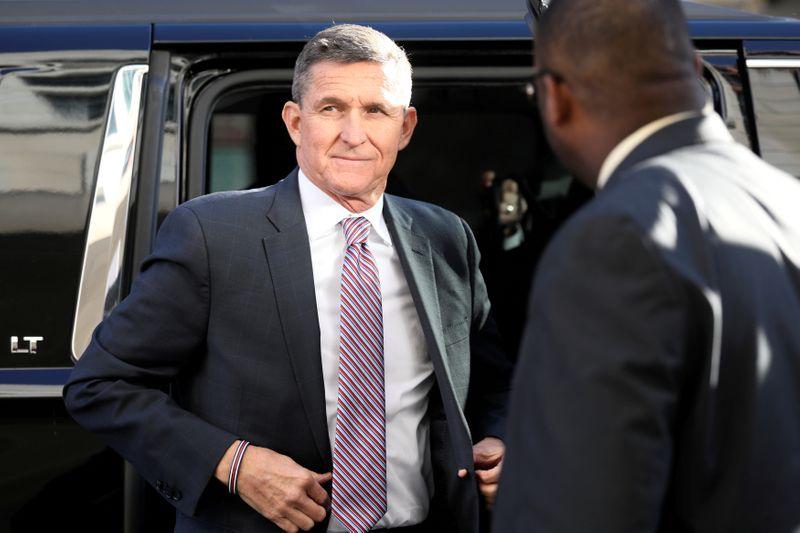 Ten judges from the U.S. Court of Appeals for the District of Columbia Circuit heard fresh arguments in the politically charged case after a three-judge panel of the same court, in a 2-1 ruling on June 24, had directed U.S. District Judge Emmet Sullivan to grant the department's motion to clear Flynn.

Flynn's lawyer Sidney Powell and Justice Department lawyer Jeff Wall pressed the judges during a hearing lasting about four hours to prevent Sullivan from using his discretion on whether to grant the department's motion for dismissal. Beth Wilkinson, a lawyer for Sullivan, said it would be premature for the appeals court to end the case now, before the judge has even ruled on the department's request.

"The government's entire argument comes down to speculation about what might happen," Wilkinson said.

Several of the judges expressed sympathy for Sullivan's position.

"The integrity and independence of the courts is also at play here," Judge Cornelia Pillard told Wall, asking whether any "self-respecting" federal district judge "would simply jump and enter an order without doing what he can to understand both sides."

"And your position," Pillard told Powell, "is that, 'No, he can't hear both sides on the law and he has to drop the case like a hot potato.'"

Democrats and other critics have accused Attorney General Bill Barr of protecting Trump's friends and allies in this and other high-profile criminal cases, warping the rule of law.

Flynn was charged under former Special Counsel Robert Mueller's investigation that detailed Russian interference in the 2016 U.S. election to boost Trump's candidacy. While awaiting sentencing by Sullivan, Flynn sought to withdraw his plea, switching lawyers to pursue a scorched-earth approach that accused the FBI of setting him up. Trump has said Flynn was treated unfairly in the case.

Judge Thomas Griffith suggested that Sullivan can scrutinize whether Flynn had been given favorable treatment because he is a Trump ally. Griffith added that Sullivan "is not simply a rubber stamp" for the Justice Department's wishes, echoing Sullivan's view.

Wall also hinted that the department moved to drop the case because of findings that have not been made public.

"It may be possible the attorney general had before him information that he was not able to share with the court," Wall said, without offering specifics.

Powell accused Sullivan of "usurping" the job of a prosecutor and said the judge "impermissibly sallied forth to right the wrongs that he perceived."

While the judges seemed inclined to rule against Flynn at this juncture, some expressed sympathy for his argument that Sullivan ultimately cannot force the department to prosecute a case it wants to drop.

The D.C. Circuit's eventual decision could be appealed to the U.S. Supreme Court.

Flynn played a prominent role in Trump's 2016 campaign. But Trump fired him in 2017 after only 24 days as national security adviser when it emerged that Flynn had misled Vice President Mike Pence and the FBI about his Kislyak dealings.

(Reporting by Jan Wolfe and Sarah N. Lynch; Editing by Will Dunham)