Judge to sentence ex-Chicago policeman for 2014 shooting of teen

By Suzannah Gonzales and Robert Chiarito CHICAGO (Reuters) - A sentencing hearing for white former Chicago police officer Jason Van Dyke started on Friday after a jury found him guilty of murder last fall in the 2014 shooting of black teenager Laquan McDonald. Van Dyke, 40, appearing unshaven and wearing a yellow-orange jail uniform in court, faces up to 20 years in prison for his second-degree murder conviction and up to 30 years for each of 16 counts of aggravated battery - one count for each shot he fired at McDonald, who was carrying a knife. 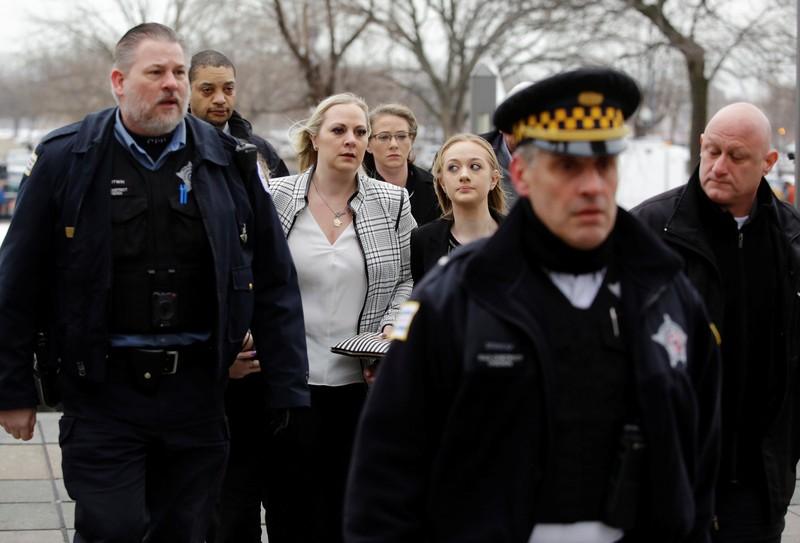 Van Dyke, 40, appearing unshaven and wearing a yellow-orange jail uniform in court, faces up to 20 years in prison for his second-degree murder conviction and up to 30 years for each of 16 counts of aggravated battery - one count for each shot he fired at McDonald, who was carrying a knife.

The October verdict was the first time an on-duty Chicago police officer was held criminally accountable for the killing of an African-American. It touched off celebratory street demonstrations in Chicago.

During the hearing, prosecutor Joseph McMahon argued that aggravated battery with a firearm is a more serious offense than second-degree murder and that Van Dyke committed 16 separate acts when he shot McDonald 16 times.

Days of protests erupted in the third-largest U.S. city when a dashboard camera video of the Oct. 20, 2014, shooting was released more than a year later in response to a Freedom of Information Act lawsuit.

The video also prompted the dismissal of the city's police superintendent and calls for Chicago Mayor Rahm Emanuel to resign. Emanuel is not running in next month's mayoral election.

Prosecutors showed the video repeatedly during the three-week trial. Jurors said they faulted Van Dyke for escalating the conflict when he could have waited for an officer with a non-lethal Taser weapon.

Van Dyke is subject to a minimum sentence of 18 years, prosecutors said in a court document this week. The defense seeks probation for second-degree murder, another court document said.

Police killings of mostly unarmed black men and teens elsewhere in the United States helped fuel the Black Lives Matter movement and were mentioned in the 2016 U.S. presidential campaign.

Van Dyke testified in his own defense, saying he feared for his safety and fired because McDonald was advancing on him. Both the officer and his lawyers argued that the angle of the video did not reflect Van Dyke's perspective.

(Reporting by Suzannah Gonzales and Robert Chiarito in Chicago; Editing by Caroline Stauffer and Jonathan Oatis)