By Suzannah Gonzales and Robert Chiarito CHICAGO (Reuters) - A judge on Thursday found three Chicago policemen not guilty of conspiring to protect white fellow police officer Jason Van Dyke after he fatally shot a black teenager in 2014 in an incident that helped fuel the 'Black Lives Matter' movement. A jury convicted Van Dyke in October of second-degree murder and 16 counts of aggravated battery in the shooting of Laquan McDonald, 17. Judge Domenica Stephenson of the Illinois Circuit Court of Cook County also found David March, Joseph Walsh and Thomas Gaffney not guilty of official misconduct and obstruction of justice. 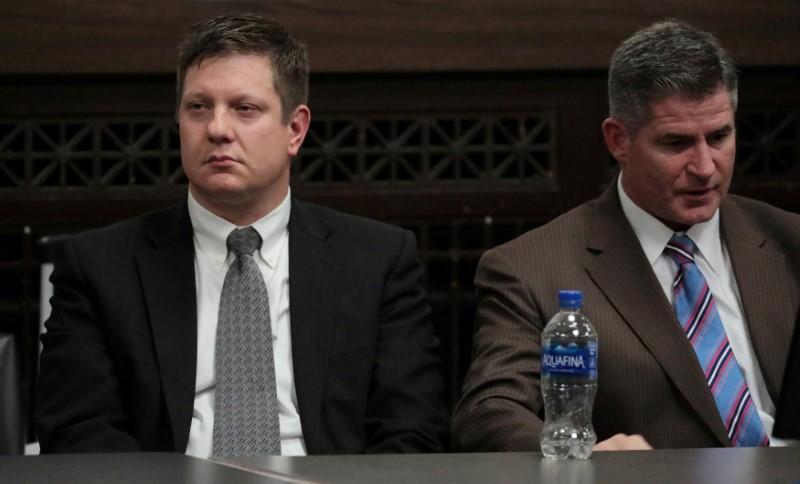 CHICAGO (Reuters) - A judge on Thursday found three Chicago policemen not guilty of conspiring to protect white fellow police officer Jason Van Dyke after he fatally shot a black teenager in 2014 in an incident that helped fuel the "Black Lives Matter" movement.

A jury convicted Van Dyke in October of second-degree murder and 16 counts of aggravated battery in the shooting of Laquan McDonald, 17.

Walsh and March, who was a detective, are no longer with the police force. Gaffney was suspended without pay.

"I got my life back," March said outside the courtroom, declining further comment.

Walsh, who also spoke outside the courtroom, said the trial has been "heart-wrenching" and "heartbreaking for my family."

Police killings of mostly unarmed black men and teens elsewhere in the United States helped spark the Black Lives Matter movement and were mentioned in the 2016 U.S. presidential campaign. McDonald was carrying a knife when he was shot 16 times.

Stephenson called the testimony of a key witness inconsistent and not credible. She said it was indisputable that McDonald ignored commands to drop his knife.

"David March, Joseph Walsh and Thomas Gaffney are innocent and should never have been here. This case wasn't even close," James McKay, March's attorney, told reporters after the ruling. "Whatever you think of Jason Van Dyke, these three men were innocent from day one."

Prosecutor Patricia Brown Holmes told a news conference: "I can't think of one thing we could have or should have done differently ... We do hope that this has opened a tiny crack in the wall of the code of silence."

A dashboard camera video released in 2015 - more than a year after the shooting - provided the evidence to convict Van Dyke in a case that laid bare tensions between the black community and police in the third-largest U.S. city.

The Van Dyke verdict was the first time an on-duty Chicago police officer was held criminally accountable for the killing of an African-American. The conviction followed numerous acquittals or mistrials of police officers facing criminal charges across the country in the deaths of black men.

The video of McDonald's shooting prompted days of protests, the ouster of the city's police superintendent and calls for Chicago Mayor Rahm Emanuel to resign. Emanuel decided not to seek a third term in next month's mayoral election.

In a joint emailed statement, Emanuel and Chicago police Superintendent Eddie Johnson said they would continue to push for "systemic reform" of the Chicago Police Department.

Karen Sheley, of the ACLU of Illinois, said in an emailed statement: "The court's decision does nothing to exonerate a police department so rotten that a teenager can be murdered - on video - by one of its officers."

Van Dyke, 40, is expected to be sentenced on Friday. He faces up to 20 years in prison for the second-degree murder conviction and up to 30 years for each of the 16 counts of aggravated battery, one for each shot he fired at McDonald.

Eric Russell, executive director of Tree of Life Justice League, a police accountability advocacy group from Chicago’s West Side, said he and other leaders expected hundreds to protest the verdict on Friday before Van Dyke's sentencing.

McDonald's great-uncle, Marvin Hunter, told reporters the verdict was a step backward for the black community's struggles for justice.

"To say these men are not guilty is to say Jason Van Dyke is not guilty," Hunter said.

(Reporting by Suzannah Gonzales and Robert Chiarito in Chicago; Additional reporting by Karen Pierog in Chicago; Editing by Caroline Stauffer and Matthew Lewis)