By Elaine Lies TOKYO (Reuters) - Japanese Emperor Naruhito will be ushered into a dark wooden hall on Thursday night to celebrate his last major accession rite after becoming emperor this spring: spending the night with a goddess. The 'Daijosai' rite centres on Amaterasu Omikami - the sun goddess from whom conservatives believe the emperor is descended 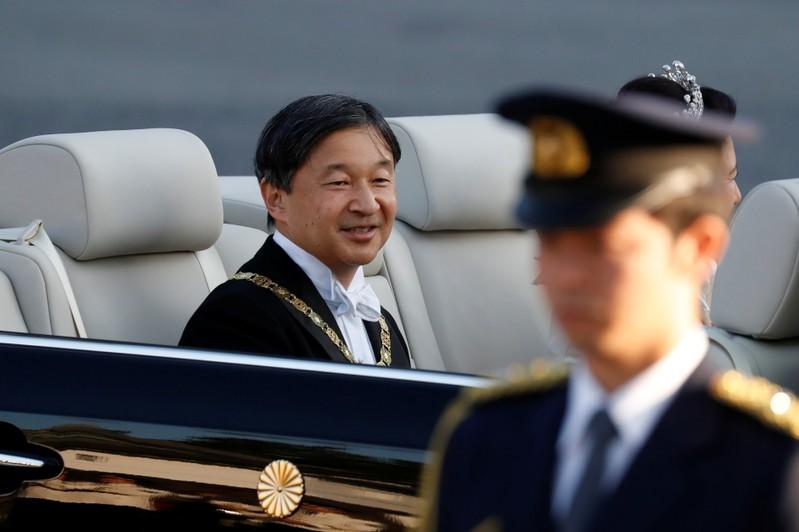 TOKYO (Reuters) - Japanese Emperor Naruhito will be ushered into a dark wooden hall on Thursday night to celebrate his last major accession rite after becoming emperor this spring: spending the night with a goddess.

The "Daijosai" rite centres on Amaterasu Omikami - the sun goddess from whom conservatives believe the emperor is descended. It is the most overtly religious of the series of rituals marking Naruhito's taking over after his father Akihito's abdication.

The rite has prompted lawsuits from critics ranging from Communists to Christians, who say it smacks of the militaristic past and violates the constitutional separation of church and state since the central government pays the 2.7 billion yen ($25 million) cost.

Rumours have persisted that the emperor has conjugal relations with the goddess, a view put forth in pre-World War Two textbooks, an era when the emperor was considered divine. Naruhito's grandfather Hirohito, in whose name Japan fought the war, was stripped of his divinity after Japan lost.

But scholars and the government say the rite involves sharing a meal of dishes from across Japan to seal the emperor's new status.

"This ritual is basically a feast involving the sun goddess and the emperor," said John Breen, professor at the International Research centre for Japanese Studies, Kyoto, who notes that most coronations have mystical elements.

"The emperor is transformed by partaking of this feast."

At around 7:00 p.m. the emperor, dressed in pure white robes, will enter a specially-built shrine compound by torchlight, disappearing behind white curtains.

Though the empress, dressed in robes with a long train, also appears, she does not follow him in.

In a dimly-lit room, kneeling by the side of piled straw mats draped in white, the emperor arranges offerings on 32 plates made of oak leaves for the sun goddess before bowing and praying for the peace of Japan.

The emperor and the goddess symbolically share rice, millet and rice wine before the roughly two-and-a-half hour ritual ends. It is then repeated in a different shrine building, with everything finishing at around 3:00 a.m.on Friday.

Critics note that while a Daijosai existed more than 1,000 years ago, the current ritual largely took its form in the late 1800s, as Japan sought to unite the nation around the emperor.

Koichi Shin, 60 and head of a group suing to ban the ritual, said the rite's nationalistic underpinnings are one reason for their opposition. Another is using public funds to stage it - a complaint echoed by the Emperor's younger brother, Crown Prince Akishino, who said the imperial family's private funds should be used, mandating a smaller rite.

Shin noted objections to the Daijosai and other imperial rites are fewer compared to 1990, when Akihito went through it, with press coverage less critical and fewer protests. In 1990, 1,700 people sued the government compared to 318 this time.

"But we think it's important to use everything we can to get across the idea that merging religion and state isn't good."