Japan will honour its longest-serving leader, Shinzo Abe, with a rare state funeral that has become nearly as divisive as he was on Tuesday.

World leaders, including Prime Minister Narendra Modi, United States vice president Kamala Harris and others, will be in attendance for the funeral for the assassinated leader.

Also read: Explained: Why Japan is split over a state funeral for Shinzo Abe, the country’s longest-serving leader

Abe’s state funeral comes just a week after global leaders had gathered in London for the state funeral of Britain’s Queen Elizabeth II. While the cost of the Queen’s funeral hasn’t been revealed, it was estimated to have been around £8 million or 1.3 billion yen. Compare this to Shinzo Abe’s funeral, which comes at a reported price of 1.66 billion yen.

In fact, a recent Kyodo news agency poll said the government was spending too much on the funeral.

What exactly make Abe’s send-off so expensive? How has the Japanese reacted to this expense?

A funeral unlike others

First off, this is not a normal event.

In Japan, state funerals are reserved for members of the Imperial Family. Only once, since World War II, has a leader been accorded this honour and that was in 1967. Shigeru Yoshida, who signed the San Francisco Treaty ending the US occupation of Japan and restoring ties with the Allies, had been given this honour then.

So, the fact that Abe is being given a state funeral is a big deal. A part of the reason for Abe being afforded this honour is because of the way he died — he was gunned down at an election rally on 8 July. And Japan mourned for him. He had never been hugely popular, according to opinion polls, but few would deny that he brought the country stability and security, reports the BBC.

Abe’s state funeral at the Nippon Budokan in central Tokyo, dubbed as ‘funeral diplomacy’ by many will see 700 guests from 217 countries, including US vice-president Kamala Harris and Indian and Australian prime ministers Narendra Modi and Anthony Albanese.

Apart from the world dignitaries, past and present leaders of Japan’s legislative, judicial and administrative branches will also be in attendance. Members of Japan’s parliament, local government representatives and community and business leaders will also be present — a number that is estimated to be around 4,000. 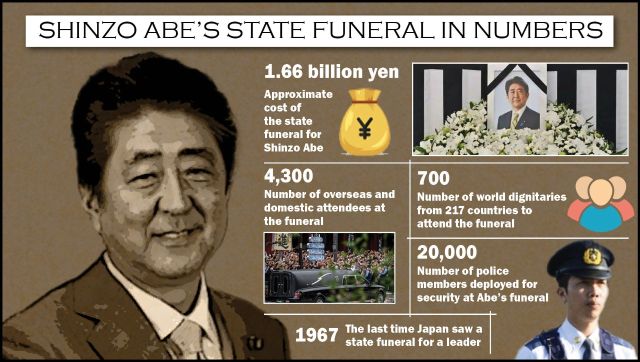 As per reports, the cost of hosting the dignitaries is expected to cost 600 million yen.

The other major expense at the funeral is the security. Large-scale police and security presence will be felt at the event.

As per a report in the Japan Times, sources within the Tokyo police said that around 20,000 members of the force will be deployed for the event, exceeding the approximate 18,000 personnel deployed at the time of a summit in May for ‘the Quad’ meet, when the leaders of Japan, the United States, Australia and India met in the capital.

Police units have already been stationed at major train stations and other locations in Tokyo.

Chief cabinet secretary, Hirokazu Matsuno, has confirmed that some 800 million yen is estimated to be spent on the policing of the event.

What to expect at the funeral

The state funeral for Abe is slated to start from 2 pm (local time) on Tuesday at the Nippon Budokan in central Tokyo. It is expected to go on for one-and-a-half hour — about half the length of the memorial service held for Shigeru Yoshida in 1965.

Inside the Budokan, guests will gather hours ahead of the funeral. No food or drinks will be allowed inside, and use of personal computers or cameras will also be limited to media. About 1,000 Japanese troops will line the streets around the venue. The ceremony will start with a 19-volley salute, as in Yoshida’s funeral.

According to an AP report, government, parliamentary and judicial representatives, including Prime Minister Fumio Kishida, will make condolence speeches, followed by Abe’s widow, Akie Abe. Outside the arena, a table for flowers will be set up for the public.

The ceremony will end with the sending off of Abe’s remains and the laying of commemorative wreaths.

The public, who wish to pay their respects, will be able to lay their flowers at Kudanzaka Park near the venue. The exorbitant price tag of Shinzo Abe’s funeral has upset many people in Japan. Some believe that the money could be spent on more meaningful causes, such as to address widening economic disparities caused by Abe’s policies.

Hidemi Noto, a 38-year-old assistant movie director, was quoted as telling Reuters, “I don’t think this funeral should be held. It has a completely different meaning to a funeral for ordinary people. I don’t think we should use tax money for this.”

There are others who echo Noto’s opinions and discontent over the funeral has only become louder in the run-up to Tuesday. On 21 September, an elderly man had set himself on fire near the prime minister’s office in an apparent protest of the funeral.

In fact, according to a recent poll by the Mainichi Shimbun newspaper, 62 per cent of respondents said they objected to the ceremony. Some said Abe was not worthy of the honour, while others cited the cost. 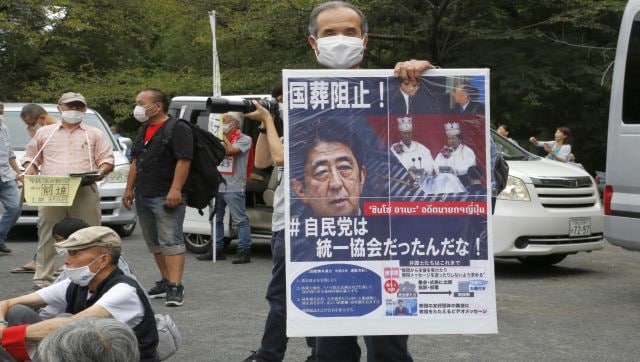 While many have grumbled about the exorbitant cost of the funeral for the former prime minister, funerals itself are an expensive affair in the Asian nation.

According to a survey carried out by Kamakura Shinsho Ltd, an online information service specializing in elderly care, funerals and graves, the average spending per funeral in 2021 was 1.1 million yen ($7,725).

That’s still around a quarter of the average annual salary and doesn’t cover extra costs such as offerings to Buddhist monks.

One expense that puts a cloud over Japan’s funerals are offering of cash to Buddhist monks, who read sutras at ceremonies and give religious names to the dead for the afterlife. Bloomberg reports that monks are paid around 200,000 yen on average for such services.

Families complain that they feel pressured to pay whatever amount is asked for, as haggling over funeral fees would be considered unseemly.

Shinzo Abe who was a strong critic of China was dubbed "the most Taiwan-friendly Japanese prime minister" by Taiwanese media. China claims sovereignty over self-ruled Taiwan

During one of PM Modi’s official visits to Japan in 2018, Abe invited his Indian counterpart to his family home in the Yamanashi prefecture, a move signalling particularly warm ties between the two leaders

Explained: The historical significance of Westminster Abbey where Queen Elizabeth’s funeral was held

One of the most iconic landmarks in London, the Westminster Abbey is steeped in royal family history. This over 700-year-old church was a witness to Queen Elizabeth II's coronation as well as her wedding. It is where she ends her journey as a funeral service is held