By Gavin Jones ROME (Reuters) - Matteo Salvini, the leader of Italy's right-wing League party, has suddenly dropped his calls for the government to resign and is instead proposing that all the main parties work together to solve the country's most pressing problems. Salvini's switch from fierce opposition to appeals for collaboration have left many observers puzzled, with some interpreting it as a sign that he is losing hope that the fractious ruling coalition will collapse any time soon. 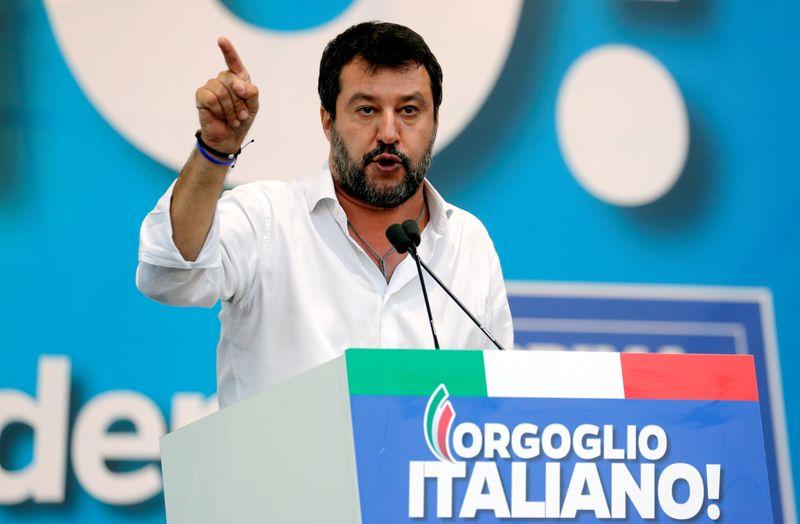 ROME (Reuters) - Matteo Salvini, the leader of Italy's right-wing League party, has suddenly dropped his calls for the government to resign and is instead proposing that all the main parties work together to solve the country's most pressing problems.

Salvini's switch from fierce opposition to appeals for collaboration have left many observers puzzled, with some interpreting it as a sign that he is losing hope that the fractious ruling coalition will collapse any time soon.

"Let's sit around a table and find agreement on five priorities for the country: savings, growth policies, justice, infrastructure and health before it's too late, then we can have an election," the League chief tweeted on Monday.

Even if it were possible for the parties to find common ground on all these areas it would be a long and arduous process taking months if not years.

In an interview with private television station Canale 5, Salvini added that a new electoral law would also have to be agreed, and said the League was not asking for a role in government while the reform process went on.

The League is Italy's most popular party, with some 30% of voter support, according to opinion polls, but recently Salvini has hit some headwinds and support for his party has flattened out.

A grassroots movement known as "the sardines", launched only a month ago in opposition to Salvini, has quickly gathered momentum with a spate of well-attended rallies, and on Saturday tens of thousands joined a demonstration in Rome.

At the same time Salvini is finding it harder to exploit his core campaigning theme of immigration, as migrant arrivals have dwindled and the new government, which took office in September, is managing to re-locate more among other EU states.

"It may be that Salvini has realised that the head of state Sergio Mattarella will never dissolve parliament, so playing nice is the only option left," said Francesco Galietti, head of political risk consultancy Policy Sonar.

Italy's new coalition of 5-Star and the centre-left Democratic Party has bickered constantly since it came to power, but it looks set to fulfil its first main task of approving a 2020 budget without friction with the European Commission.

The League chief's call for "a national rescue committee" got a cold reception from his far-right ally Giorgia Meloni, head of the Brothers of Italy party, which is growing in support.

"It's an incomprehensible proposal," Meloni said in an interview with daily Corriere della Sera on Monday.