By Giselda Vagnoni and Valentina Za ROME/MILAN (Reuters) - Weeks into Italy's coronavirus lockdown, thousands of Italian entrepreneurs have been given a bureaucratic shortcut to market. The government last week extended non-essential business closures to May 3. But more than 100,000 mainly small- and medium-sized companies have applied to keep going or partially reopen. 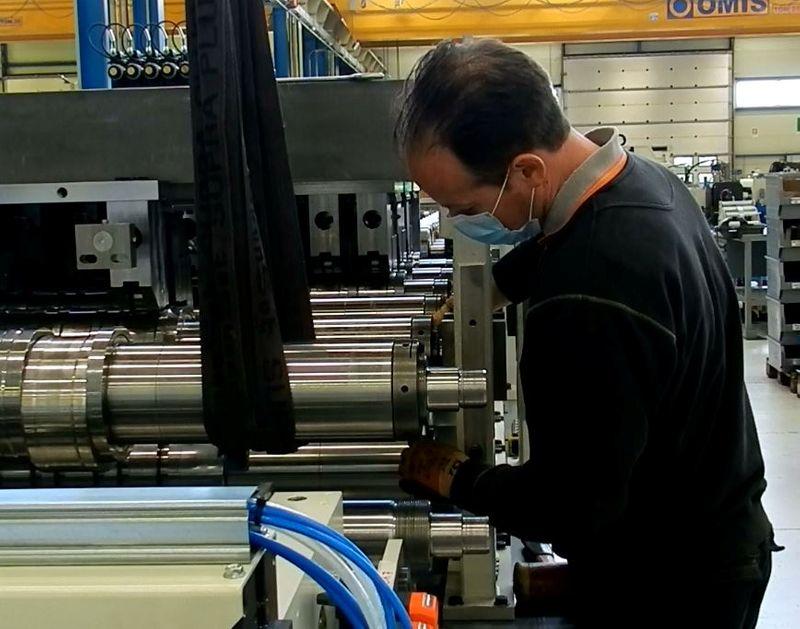 By Giselda Vagnoni and Valentina Za

ROME/MILAN (Reuters) - Weeks into Italy's coronavirus lockdown, thousands of Italian entrepreneurs have been given a bureaucratic shortcut to market. The government last week extended non-essential business closures to May 3.

But more than 100,000 mainly small- and medium-sized companies have applied to keep going or partially reopen.

In principle, a key hurdle for companies to do business should be that they can prove they are part of a supply chain to businesses that are deemed "essential" in a government decree, such as food, energy or pharmaceutical companies.

But the government, facing a backlog of applications, has clarified Italy's lockdown laws to say no companies need to wait for government approval to go ahead.

More than 105,000 firms have applied to be considered part of essential supply chains, the interior minister said on Wednesday, in a guideline on its website to clarify the lockdown rules.

Of those, just over 2,000 have been turned down and told to suspend their business. More than 38,000 are being investigated and the rest are waiting to be looked at.

The ministry said on Wednesday businesses that have previously submitted such requests can now "benefit from an immediate start" to their business.

So unless companies have been told they are not critical, all they need to do is to inform their local authority that they plan to reopen. Then, without waiting for an answer, they can go ahead.

The flood of notifications by Italian companies underscores the desperation of corporations to restart production. This is especially true in Italy where nearly 4 million companies employing fewer than 10 people make up the fabric of the economy.

Italy's experience also highlights the challenge for governments across developed countries to oversee shutdowns that are crippling their economies.

The government will carry out inspections to make sure companies are not cheating the system, a spokesperson for the interior ministry told Reuters.

Big swathes of Italy's economy are unable to get back to work. Almost half of the country's businesses from fashion to autos generating 1.3 trillion euros ($1.41 trillion) in annual turnover remain paralysed - the fashion industry, for instance, unable to claim an "essential" role, has taken out newspaper adverts to plead for a chance to reopen.

One company that has gone ahead is Gasparini S.p.A., a maker of metal processing machines in the northern region of Veneto where more than 14,600 people have tested positive for the virus.

Gasparini makes machines used to manufacture products from industrial shelving to components for electricity transmission and metal posts for vineyards.

It had to halt production for two weeks. But the company says some of its customers, which make power generation and distribution systems, are in "essential" supply chains. As a result, it has found a way back to work.

Its chief executive, Filippo Gasparini, told Reuters the company last week had sent a certified email to the Venice local authority or prefect, specifying the names of relevant clients and their sector of activity and saying it intended to resume supplies to them. "Then we went ahead with it without hearing back."

Gasparini employs 120 staff, and said roughly a quarter of them are now working on the factory floor. It has stepped up sanitising activities, equipped workers with masks and gloves and has staff monitoring workers to ensure they keep their distance from each other.

Union representative Leonardo Pattarello said he was satisfied by the steps. "I feel safer here than when I go grocery shopping," he told Reuters, referring to the lockdown rule which imposes staggered entry programmes for supermarkets.

"We've created one-way paths inside the company so that people can't run into each other, we all have masks and latex gloves, there are bottles of hand sanitiser next to where people get water or coffee. They take our temperature in the morning."

An official at the Venice prefect's office said there had been a large number of applications so it was not immediately possible to provide information about a specific company.

Gasparini and the more than 100,000 businesses that have tapped local authorities are adding to political pressure on Rome to reopen Europe's No. 3 economy for business as new cases of COVID-19 have started to plateau.

"I have the impression that at least 60% of companies have already opened," said Luca Zaia, governor of the Veneto region where Gasparini is based.

"It is useless that we continue to think of lockdown at a national level. We must not be hypocritical, the lockdown no longer exists."

More than 22,000 people in Italy have died with the virus, most in the wealthy north which makes up 45% of the country's economic output.

Instead he extended the lockdown and said that a new committee of experts, chaired by former CEO of British phone company Vodafone Vittorio Colao, would advise his government on how to waive them.  Colao has made no public comment so far.

In the town of Padua in the Veneto region, prefect Renato Franceschelli said he had received 4,500 requests from firms wanting to be classified as part of an essential supply chain. Of these, 3,400 had been examined and only very few told to suspend activities.

"We expect many more to come," he said. Each case is complex and the supply chain is very long, he said: For example. It can include ink producers for labels for the pharmaceutical industry.

Some big businesses are chafing. The fashion industry has said it has only a few days left to save its next season.

It took out a full-page advert in the national press at the weekend to call for the government to allow it to resume business.

"If our factories do not reopen by April 20, we won't be able to deliver our Autumn/Winter collections which must be sent by July to our clients all over the world," CNMI head Carlo Capasa said in the advertisement.

On Thursday, fashion lobby Confindustria Moda said it had signed an accord with unions over safety procedures to restart activity, when the government agrees.

And carmakers are raring to go. Fiat Chrysler Automobiles NV

Data released by the national statistics office on Thursday highlight the impact on Europe's third-largest economy: some 2.1 million companies - just under half of the national total - employing 7.1 million people are shuttered.

Two-thirds of them make goods for sale abroad, mainly to China.

The figures do not take into account companies that are back to work thanks to the bureaucratic shortcut.

The timing of Italy's exit from the lockdown is also closely watched by Europe's biggest economy, Germany, whose automotive, pharmaceutical and food industries are intertwined with Italy's.

The Federation of German industries recently wrote to its Italian counterpart Confindustria calling for a coordinated resumption of production over the coming weeks.

"German entrepreneurs call me to find out how Italy is doing, what is happening with the Italian production we are also dependent on," German ambassador to Rome Viktor Elbling said. As companies return to business, their do-it-yourself approach is worrying medics.

On Tuesday, Massimo Galli, head of the infectious diseases at Milan's Sacco hospital, told Italian state broadcaster RAI he had received many requests for advice from companies on the use of instant test kits for coronavirus, hoping to check staff before allowing them to return to work.

"The number of requests ... is such that companies will organise on their own if (guidance) is not given," he said.

Next door to Veneto in Bologna, Marzocchi Pompe, a producer of high-performance gear pumps, said it was resuming production from Tuesday after receiving many requests from essential sectors such as manufacturers of machinery for hospitals.

It informed the local prefect and reopened. "We considered it not only necessary but above all dutiful to start again," said CEO Gabriele Bonfiglioli.