By Gavin Jones ROME (Reuters) - The Italian coastguard sent help on Saturday to a rescue boat funded by British street artist Banksy after the vessel issued urgent calls for assistance, saying it was stranded in the Mediterranean and overloaded with migrants. The coastguard said a patrol boat dispatched from the southern Italian island of Lampedusa had taken on board 49 of 'those considered most vulnerable' among the 219 migrants picked up by the ship since Thursday off the coast of Libya. Named after a French feminist anarchist, the Louise Michel started operating last week. 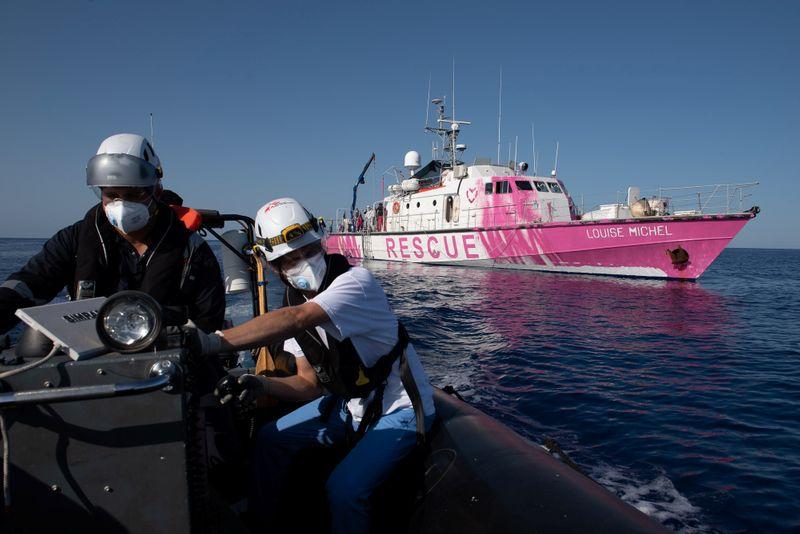 ROME (Reuters) - The Italian coastguard sent help on Saturday to a rescue boat funded by British street artist Banksy after the vessel issued urgent calls for assistance, saying it was stranded in the Mediterranean and overloaded with migrants.

The coastguard said a patrol boat dispatched from the southern Italian island of Lampedusa had taken on board 49 of "those considered most vulnerable" among the 219 migrants picked up by the ship since Thursday off the coast of Libya.

Named after a French feminist anarchist, the Louise Michel started operating last week. Despite the help from Italy, it has still not found a safe port for the rest of the mainly African migrants on board.

The 49 people who were transferred off the ship include 32 women and 13 children, the Italian coastguard said.

The Louise Michel, a German boat manned by a crew of 10, issued a series of tweets overnight and on Saturday saying its situation was worsening, and appealing for help from authorities in Italy, Malta and Germany.

"We are reaching a state of emergency. We need immediate assistance," said one tweet, adding that it was also carrying a body bag containing the corpse of one migrant who had died.

Another tweet said the boat was unable to move and "no longer the master of her own destiny" due to her overcrowded deck and a life raft deployed at her side, "but above all due to Europe ignoring our emergency calls for immediate assistance."

Before Italy's coastguard intervened, an Italian charity ship, the Mare Jonio, said it was leaving the Sicilian port of Augusta, much further away than Lampedusa, to offer assistance.

Two United Nations' agencies called for the "urgent disembarkation" of the Louise Michel and two other ships carrying a total of more than 400 migrants in the Mediterranean.

Some 200 are on the Sea Watch 4, a German charity ship, while 27 have been on board the commercial tanker Maersk Etienne since their rescue on Aug. 5.

The International Organisation for Migration and the U.N. High Commissioner for Refugees said in a joint statement they were "deeply concerned about the continued absence of dedicated EU-led search and rescue capacity in the Central Mediterranean".

"The humanitarian imperative of saving lives should not be penalized or stigmatized, especially in the absence of dedicated state-led efforts," they said.

Italy is the destination of most migrants who have departed from Libya across the Mediterranean in recent years. The influx has created political tensions in Rome and fuelled the success of Matteo Salvini's right-wing League party.

The 30-metre long (98-foot) Louise Michel, a former French Navy boat daubed in pink and white, was bought with proceeds from the sale of Banksy artwork.

The side of the vessel's cabin features a picture of a girl holding a heart-shaped life buoy in Banksy's familiar stencilled style.

Bristol-born Banksy, who keeps his identity a secret, is known for his political or social-commentary graffiti that has popped up in cities around the world.