The eyes of the world are on today’s Italian general election.

Things have been on a slow boil ever since Prime Minister Mario Draghi stepped down from his post in July.

Now, with the likelihood that Italy will have its most far-right government since World War II –with the possibility of its first female prime minister no less – things are set to come to a spectacular conclusion. Giorgia Meloni is set to make history and the country is wary.

Let’s take a closer look at how Italy elects and who’s up again whom.

How does Italy vote for a prime minister?

Italy has a dual electoral system – first-past-the-post as well as the proportional representational method. Roughly a third of the seats are allocated to the former and two-thirds to the latter under this system.

General elections decide the composition of the Lower House, the Chamber of Deputies, and the Senate. All Italians age 18 and above are eligible to vote.

However, these voters don’t get to directly pick their prime minister.

The head of the government is chosen after the new parliament takes office and a candidate has won a confidence vote as well as the president’s approval.

According to EuroNews, Italy’s electoral system has largely remained consistent since 1947, the year when the country became a republic. However, this year things will be a bit different. The current electoral system will favour coalition governments over individual parties.

Following a constitutional referendum, the size of the chambers will be halved to 400 members in the Lower House and 200 in the Upper House, as per Politico.

Why were polls pushed forward?

On 21 July, Mario Draghi stepped down as Italy’s prime minister, a year-and-a-half after being appointed head of a unity government. He informed President Sergio Mattarella that his decision to step down came after three parties in his government refused to back him in a confidence vote. The president asked him to act as a caretaker leader and announced that the 2023 elections will be brought forward.

Many political heavyweights are in the fray.

Leading in the race and a firm favourite is Giorgia Meloni’s Fratelli d’Italia (Brothers of Italy) backed by two other political parties, League and Forza Italia.

Meloni established her party in 2012, four years after becoming the country’s youngest-ever minister under former prime minister Silvio Berlusconi in 2008. According to Al Jazeera, the right-wing coalition has pledged loyalty to the European Union and North Atlantic Treaty Organisation.

Apart from this, the party has also vowed to prevent “illegal immigration”.

Then there is centre-left Democratic Party (PD) candidate Enrico Letta. A former prime minister from 2013 to 2014, Letta led a coalition with Silvio Berlusconi’s Forza Italia and was ultimately brought down by a rival of his own party, according to a BBC report.

The political manifesto of the Democratic Party includes increased welfare benefits and civil rights with special emphasis on the youth and the environment. The party also wants to make it easier for children born to foreign parents to get Italian citizenship and has promised to pass a law which will toughen penalties for discrimination against the LGBTQ community. 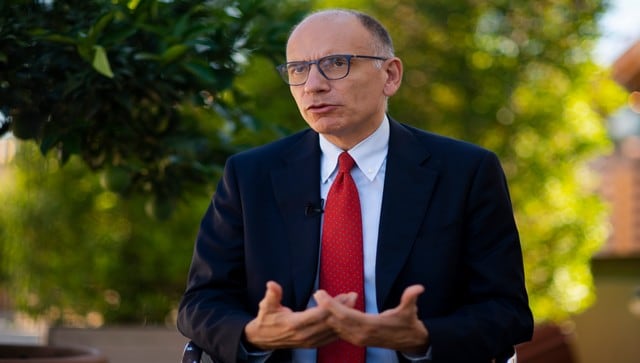 Aiming to create a “third pole” alliance, Matteo Renzi of Italia Viva and Carlo Calenda of Azione have teamed up to attract votes from both the right and left. The alliance has vowed to continue the pro-European policies of the previous Draghi government and even to persuade him to return as prime minister.

They also seem to favour nuclear power, despite the public twice rejecting it in 1987, in the aftermath of Chernobyl, and in 2011 after Fukushima.

Who is likely to win?

Giorgia Meloni’s Fratelli d’Italia (Brothers of Italy) has seen a spectacular rise from a meagre four per cent in 2018 to a projected 25 per cent this year.

According to a report by CNBC, polls conducted before 9 September showed that The Brothers of Italy are likely to win a majority of seats. The far-right coalition party is also expected to gain the largest vote share.

Meloni’s victory will have far-reaching consequences not only for Italy but for the entire Europen Union, according to The Guardian. Her refusal to take part in the previous government has paid off, but her hard-right rhetoric of “God, family, fatherland” is proving to be a cause of concern for many.