'It was a non-event': U.S. capitals see few protesters after bracing for violence

By Nathan Layne and Brendan O'Brien HARRISBURG, Pa./LANSING, Mich. (Reuters) - Law enforcement officers far outnumbered protesters at state capitol grounds on Sunday, as few Trump supporters who believe the president's false claim that he won the 2020 election turned out for what authorities feared could be violent demonstrations. More than a dozen states activated National Guard troops to help secure their capitol buildings following an FBI warning of armed demonstrations, with right-wing extremists emboldened by the deadly attack on the U.S. 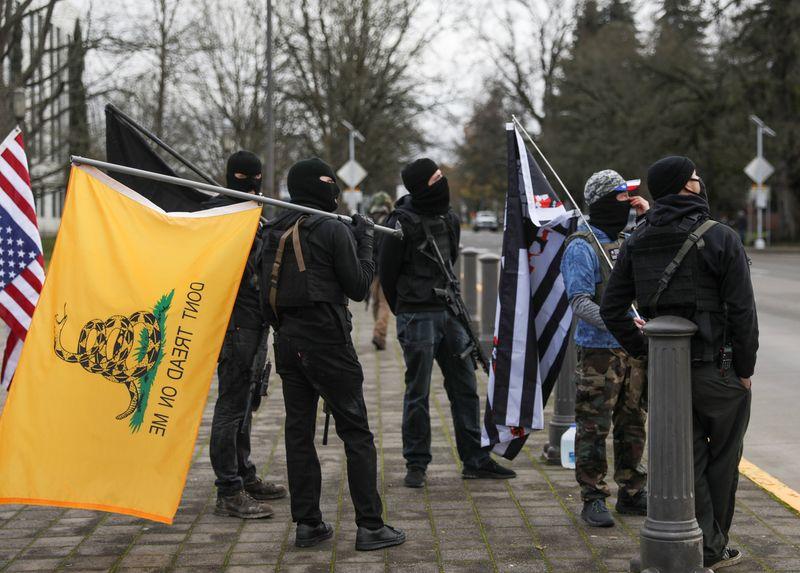 By Nathan Layne and Brendan O'Brien

HARRISBURG, Pa./LANSING, Mich. (Reuters) - Law enforcement officers far outnumbered protesters at state capitol grounds on Sunday, as few Trump supporters who believe the president's false claim that he won the 2020 election turned out for what authorities feared could be violent demonstrations.

More than a dozen states activated National Guard troops to help secure their capitol buildings following an FBI warning of armed demonstrations, with right-wing extremists emboldened by the deadly attack on the U.S. Capitol in Washington on Jan. 6.

Security officials had eyed Sunday as the first major flashpoint, as that is when the anti-government "boogaloo" movement made plans weeks ago to hold rallies in all 50 states.

But by late Sunday afternoon, only handfuls of demonstrators had taken to the streets alongside much larger crowds of law enforcement officers and media personnel.

"It was a non-event today and we are glad it was," said Troy Thompson, spokesman for the Department of General Services, the agency that protects the Pennsylvania Capitol in Harrisburg.

On Sunday afternoon, police opened streets around the building that had been blocked off in anticipation of bigger crowds.

Only a few Trump supporters had shown up, including Alex, a 34-year-old drywall finisher from Hershey, Pennsylvania who said he had been at the Jan. 6 siege of the U.S. Capitol but did not storm the building. He declined to give his last name.

Wearing a hoodie emblazoned with "Fraud 2020", he said he believed November's presidential election was stolen and wanted to show his support for Trump. He noted the lack of protesters at the Pennsylvania capitol on Sunday.

"There's nothing going on," he said.

A similarly small group of about a dozen protesters, a few armed with rifles, stood outside Michigan's capitol in Lansing on Sunday afternoon. One wore fatigue pants, a tactical vest and blue Hawaiian shirt, a trademark of the anti-government boogaloo movement.

"I am not here to be violent and I hope no one shows up to be violent," said one man standing on the lawn in front of the capitol. The man, who refused to give his name, wore a "Make America Great Again" hat and waving a "Don't tread on me" flag.

By early evening, the capitol grounds in Lansing were deserted.

The nationwide security uptick followed the attack on the U.S. Capitol in Washington by a mix of extremists and Trump supporters, some of whom called for the death of Vice President Mike Pence as he presided over the certification of Democrat Joe Biden's election victory.

The FBI and other federal agencies have warned of the potential for future violence leading up to Biden's inauguration on Wednesday, as white supremacists and other extremists seek to exploit frustration among Trump supporters who have bought into his falsehoods about electoral fraud.

Tens of thousands of security personnel from the National Guard and law enforcement agencies have descended upon Washington, D.C., to bolster security ahead of Wednesday's ceremony.

On Sunday, Capitol Police in Washington said they had arrested a woman at a security checkpoint on Saturday for falsely impersonating a police officer after she "presented what was identified as a military challenge coin, and stated that she was a law enforcement officer."

The woman underwent a psychiatric evaluation before being transported to Central Cell Block, police said in a statement.

Downtown Washington was a ghost town on Sunday. Gun-toting National Guard soldiers in camouflage manned checkpoints across the city center, which was closed off to traffic with large military vehicles deployed to block streets.

It was not clear whether the FBI warning and ramped up security presence around the country might have led some protesters to cancel plans to go to their state capitols.

Following the Jan. 6 violence in Washington, some militia members said they would not attend a long-planned pro-gun demonstration in Virginia on Monday, where authorities were worried about the risk of violence as multiple groups converged on the state capital, Richmond.

The streets around the statehouse in Richmond were lined with barricades on Sunday afternoon, but aside from a few police officers and reporters, the area was deserted.

Some militias and extremist groups told followers to stay home this weekend, citing the increased security or the risk that the planned events were law enforcement traps.

Bob Gardner, leader of the Pennsylvania Lightfoot Militia, said his group had no plans to be in Harrisburg this weekend.

"We've got our own communities to worry about," Gardner said earlier this week. "We don’t get involved in politics."