Istanbul attack as it happened: 38 killed, 147 injured by suspected IS suicide bombers

Social networking giant Facebook activated its safety check feature for users after the Istanbul attack, reported IANS. The feature allows people to notify their friends if they are in the affected area and mark themselves as safe. A click or tap on the "I'm Safe" button lets friends and loved ones know straight away. Users can also check to see whether their friends are safe too.

Nato chief strongly condemned the "horrific attacks" at Istanbul's airport, and said Turkey's 27 allies in the US-led political and military organization stand with it, reported AP.

Jens Stoltenberg, Nato's secretary-general, said in a statement: "My thoughts are with the families of the victims, those injured and the people of Turkey. "There can be no justification for terrorism," Stoltenberg said. "Nato allies stand in solidarity with Turkey, united in our determination to fight terrorism in all its forms."

No report of Indian casualty: MEA

Officials on Wednesday morning began assessing the damage caused at Istanbul's Ataturk Airport by three suicide bombers who killed dozens and wounded more than 140, reported AP. Workers were brought in to remove debris left by the blast, while in the daylight the damage to the terminal became clearer with even ceiling panels hit.The airport was partially reopened, with the information board inside the airport showing that about one third of scheduled flights have been canceled, with a host of others delayed.

We stand with our allies: Justin Trudeau

Canandian Prime Minister strongly condemned the deadly attack at Istanbul's Ataturk airport. "My thoughts are with the victims as we stand with our allies against terrorism," he said on Twitter.

Canada strongly condemns tonight’s deadly attack in Turkey. My thoughts are with the victims as we stand with our allies against terrorism.

Ataturk Airport one of the busiest in the world

Istanbul's Ataturk Airport was the 11th busiest airport in the world last year, with 61.8 million passengers, according to Airports Council International. It is also one of the fastest-growing airports in the world, seeing 9.2 percent more passengers last year than in 2014, reported AP. The largest carrier at the airport is Turkish Airlines, which operates a major hub there. Low-cost Turkish carrier Onur Air is the second-largest airline there.

Ataturk Airport one of the busiest in the world

Istanbul's Ataturk Airport was the 11th busiest airport in the world last year, with 61.8 million passengers, according to Airports Council International. It is also one of the fastest-growing airports in the world, seeing 9.2 percent more passengers last year than in 2014, reported AP. The largest carrier at the airport is Turkish Airlines, which operates a major hub there. Low-cost Turkish carrier Onur Air is the second-largest airline there.

The devastation at Istanbul's airport follows the March attack on Brussels Airport, where two suicide bombings ripped through check-in counters, killing 16 people. The Islamic State group claimed responsibility for that attack, as well as a subsequent explosion at a Brussels subway station that killed 16 more people.

Belgian Prime Minister Charles Michel said on Twitter: "Our thoughts are with the victims of the attacks at Istanbul's airport. We condemn these atrocious acts of violence."

Our thoughts are with the victims of the attacks at Istanbul's airport. We condemn these atrocious acts of violence #Istanbul

Suicide attacks in Turkey go up

Suicide attackers killed at least 38 people and wounded more than 140 at Istanbul's busy Ataturk Airport. Turkish officials said the explosions were probably the work of Islamic State group militants. On 13 March, 2016, a Kurdish woman blew herself up in a car at a busy transport hub in Ankara, killing 37 people in an attack that was also claimed by TAK, also known as the Kurdish Freedom Falcons. Later, on 19 March, a suicide bombing rocked Istanbul's main pedestrian street killing five people, including the bomber, whom authorities identified as a Turkish national linked to IS. 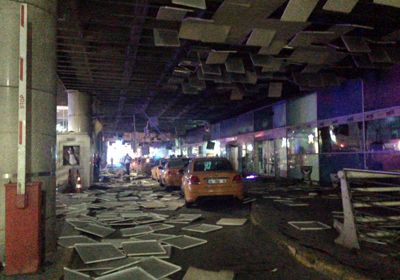 The senior official, who spoke on condition of anonymity in line with government protocol, at first said close to 50 people had already died, but later said that the figure was expected to rise to close to 50.

Yildirim said three suicide bombers were responsible for the attack and all initial indications suggest the Islamic State group was behind it. Medics and security members work at the entrance of the Ataturk Airport after explosions in Istanbul on Tuesday. AP

"The findings of our security forces point at the Daesh organization as the perpetrators of this terror attack," Yildirim told reporters at the airport, using the Arabic name for Islamic State. "Even though the indications suggest Daesh, our investigations are continuing."

Yildirim said the attackers arrived at the airport in a taxi and blew themselves up after opening fire. Asked whether a fourth attacker might have escaped, he said authorities have no such assessment but are considering every possibility.

The victims included some foreigners, he said, adding that many of the wounded have minor injuries but others are more badly hurt.

Another Turkish official said two of the attackers detonated explosives at the entrance of the international arrivals terminal after police fired at them, while the third blew himself up in the parking lot.

The official, who also spoke on condition of anonymity in line with government regulations and cited interior ministry information, said none of the attackers managed to get past security checks at the terminal's entrance.

Roads around the airport were sealed off for regular traffic after the attack and several ambulances could be seen driving back and forth. Hundreds of passengers were flooding out of the airport and others were sitting on the grass.

Hevin Zini, 12, had just arrived from Duesseldorf, Germany, with her family and was in tears from the shock.

"There was blood on the ground," she told AP. "Everything was blown up to bits... if we had arrived two minutes earlier, it could have been us."

South African Judy Favish, who spent two days in Istanbul as a layover on her way home from Dublin, had just checked in when she heard an explosion followed by gunfire and a loud bang.

She says she hid under the counter for some time.

Favish says passengers were ushered to a cafeteria at the basement level where they were kept for more than an hour before being allowed outside.

Two South African tourists, Paul and Susie Roos from Cape Town, were at the airport and due to fly home at the time of the explosions.

"We came up from the arrivals to the departures, up the escalator when we heard these shots going off," Paul Roos said. "There was this guy going roaming around, he was dressed in black and he had a hand gun."

Yildirim said air traffic at the airport, which was suspended after the attack, had resumed to normal.

The prime minister called for national unity and "global cooperation" in combating terrorism.

"This (attack) has shown once again that terrorism is a global threat," Yildirim said. "This is a heinous planned attack that targeted innocent people."

He suggested that the attack was linked to what he said was Turkey's success against Kurdish rebels as well as steps Ankara took on Monday toward mending strained ties with Israel and Russia.

"It is meaningful that this heinous attack came at a time when we have become successful in the fight against separatist terrorism ... and at a time when we started a process of normalizing ties with our neighbors," Yildirim said.

Yildirim insisted there was no security lapse at the airport but said the fact that the attackers were carrying weapons "increased the severity" of the attack.

The private DHA news agency said the wounded, among them police officers, were transferred to Bakirkoy State Hospital.

The bombings include two in Istanbul targeting tourists that authorities have blamed on the Islamic State group.

The attacks have increased in scale and frequency, scaring off tourists and hurting the economy, which relies heavily on tourism revenues.

Istanbul's Ataturk Airport was the 11th busiest airport in the world last year, with 61.8 million passengers, according to Airports Council International. It is also one of the fastest-growing airports in the world, seeing 9.2 percent more passengers last year than in 2014.

The largest carrier at the airport is Turkish Airlines, which operates a major hub there. Low-cost Turkish carrier Onur Air is the second-largest airline there.

As per News18, Maharashtra deputy chief minister Ajit Pawar, during a visit to the Serum Institute of India, said that energy audit teams have been instructed to conduct a fire audit, which will happen tomorrow