Israel's Netanyahu to give statement amid signs of early election

By Jeffrey Heller JERUSALEM (Reuters) - Israeli Prime Minister Benjamin Netanyahu will make a televised statement on Sunday after making a last-ditch effort to avoid the collapse of a coalition government weakened by the resignation of his defence minister. Netanyahu, head of the right-wing Likud party, has met over the past few days with coalition partners, some of whom have called for an early election. Political pundits predict a snap vote could come as soon as March, instead of November as scheduled. 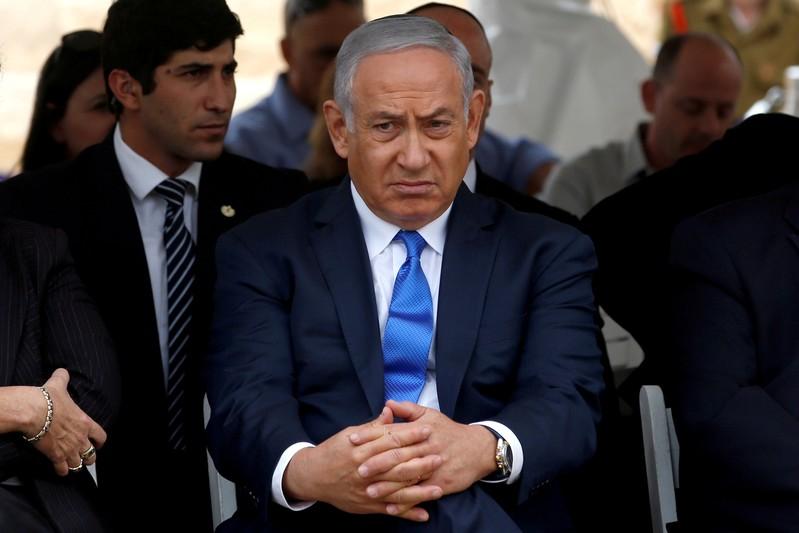 JERUSALEM (Reuters) - Israeli Prime Minister Benjamin Netanyahu will make a televised statement on Sunday after making a last-ditch effort to avoid the collapse of a coalition government weakened by the resignation of his defence minister.

Netanyahu, head of the right-wing Likud party, has met over the past few days with coalition partners, some of whom have called for an early election. Political pundits predict a snap vote could come as soon as March, instead of November as scheduled.

Netanyahu's office said he would make a statement to reporters at 8 p.m. (1800 GMT), giving no details.

The remarks will follow a meeting between Netanyahu and his finance minister, Moshe Kahlon of the centre-right Kulanu party, who has urged setting an early election date.

Defence Minister Avigdor Lieberman's resignation, announced on Wednesday over what he described as the government's lenient policy towards an upsurge of cross-border violence with Palestinian militants in the Gaza Strip, left the government with a majority of only one seat in parliament.

That put the fate of Netanyahu's coalition at the mercy of its partners, who have seen the four-term prime minister's popularity take a rare hit in an opinion poll that showed Israelis were unhappy with him over Gaza.

Netanyahu described his planned meeting with Kahlon as "a last attempt to prevent the collapse of the government".

Addressing his cabinet on Sunday, he said it would be "unnecessary and wrong to go to an election during this sensitive period for our security".

Kahlon said on Hadashot TV news on Saturday that it was impossible to run a coalition with control of just 61 of parliament's 120 seats.

Kahlon's call was echoed by members of the nationalist Jewish Home whose head, Naftali Bennett, asked to succeed Lieberman as defence chief but was turned down by Netanyahu on Friday.

On Sunday, Israeli media reports said Netanyahu was now prepared to offer Bennett the post in a bid to keep Jewish Home in the coalition.

Such a move, the unconfirmed reports said, would also be aimed at forcing Kahlon to consider the risks to his own party, which also courts nationalist voters, in being portrayed as the main factor behind the collapse of a rightist government.

A poll published on Wednesday by Hadashot showed Likud falling to 29 from 30 parliamentary seats after months of polls that have shown it gaining power.

Only 17 percent of respondents were happy with Netanyahu's policy toward Gaza, where he agreed to a ceasefire - dubbed by Lieberman as "surrender" - after militants from its ruling Hamas group launched almost 500 rockets into Israel on Monday and Tuesday and Israel carried out dozens of air raids.

Netanyahu's re-election chances could also be affected by a series of corruption cases against him in which Israel's attorney-general is weighing his indictment.

An election would complicate promised moves by the United States towards reviving Israeli-Palestinian peace efforts that collapsed in 2014. The Trump administration has said it would unveil a peace plan soon.