By Stephen Farrell and Dan Williams JERUSALEM (Reuters) - A group of United Arab Emirates officials became the first Gulf Arab delegation ever to visit in Israel on Tuesday, cementing a normalisation deal in an occasion that Israel and U.S. 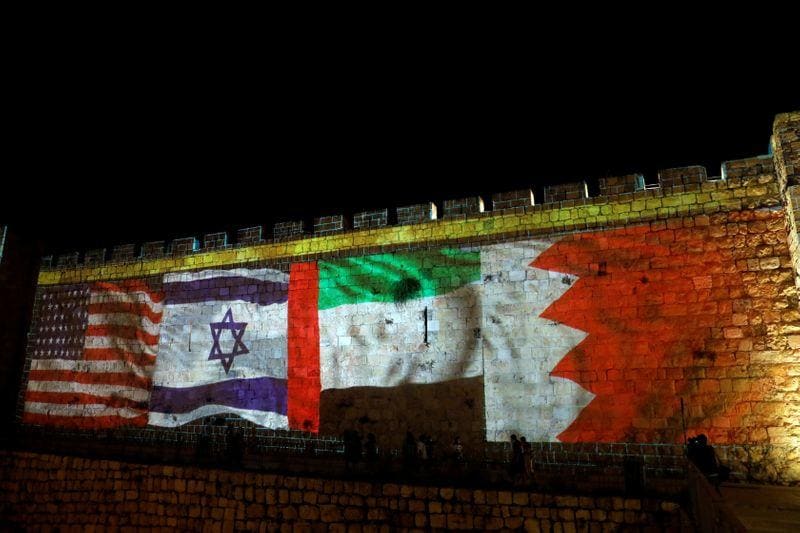 By Stephen Farrell and Dan Williams

JERUSALEM (Reuters) - A group of United Arab Emirates officials became the first Gulf Arab delegation ever to visit in Israel on Tuesday, cementing a normalisation deal in an occasion that Israel and U.S. officials described as historic but the Palestinians called "shameful".

The UAE and Gulf neighbour Bahrain became the first Arab states in a quarter of a century to establish formal ties with Israel despite ongoing differences over the Israeli-Palestinian conflict.

The deals, forged largely over shared fears of Iran, were brokered by U.S. President Donald Trump ahead of next month's U.S. presidential election.

They were accompanied by U.S. Treasury Secretary Steven Mnuchin and other American officials on the flight from Abu Dhabi to Ben Gurion Airport near Tel Aviv. The visiting party was restricted to the airport because of concerns over COVID-19.

"I think that the visit of such a high level delegation from the UAE... will show our peoples, the region and the entire world the benefit of having friendly, peaceful and normal exchanges," Netanyahu said.

Four agreements were signed - on the promotion and protection of investments, cooperation in science and innovation, civil aviation and visa exemptions.

Tayer said the deals offered "great opportunities" to "achieve prosperity for both our economies, and our people".

Citing discussions on taxation and financial relations, he said there had already been significant progress and added: "We look forward to welcoming you to the UAE in the near future."

Washington and its allies have said the deals would foster regional peace and stability. But they have prompted anger from the Palestinians.

Wasel Abu Youssef, a member of the Executive Committee of the Palestine Liberation Organization said Tuesday's UAE visit came amid Israeli settlement expansion and was "shameful".

"The bilateral agreements that were announced today and the delegations that come and go, all of that offers the occupation strength to escalate its aggression and its crimes against the Palestinian people and increases its intransigence and arrogance," he said in Ramallah, in the Israeli-occupied West Bank.

In Gaza, Hazem Qassem, a spokesman for the Islamist group Hamas, said: "Such a visit will only encourage the occupation to pursue the gradual annexation of West Bank lands."

Reflecting a realignment of regional powers concerned about Iran, he added that Israel, the UAE and USA "share a similar outlook regarding threats and opportunities in the region."

He said he envisaged funding to enable the modernisation of Israeli-operated checkpoints for Palestinians. Israel says the checkpoints are vital for its security, while Palestinians complain that they hamper their ability to live and work.

The U.S. officials had on Sunday joined an Israeli delegation to Bahrain for a signing ceremony to formalise ties.

The agreements signed on Tuesday followed several commercial deals signed by Israel and the UAE since mid-August.

"These agreements are of strategic and regional importance, will increase investment, trade and strengthen economic ties between the countries," said Israeli Finance Minister Israel Katz.