By Dan Williams JERUSALEM (Reuters) - Israel received its first shipment of coronavirus vaccines on Wednesday and a distributor predicted the country would have enough for about a quarter of the population by the end of the year. 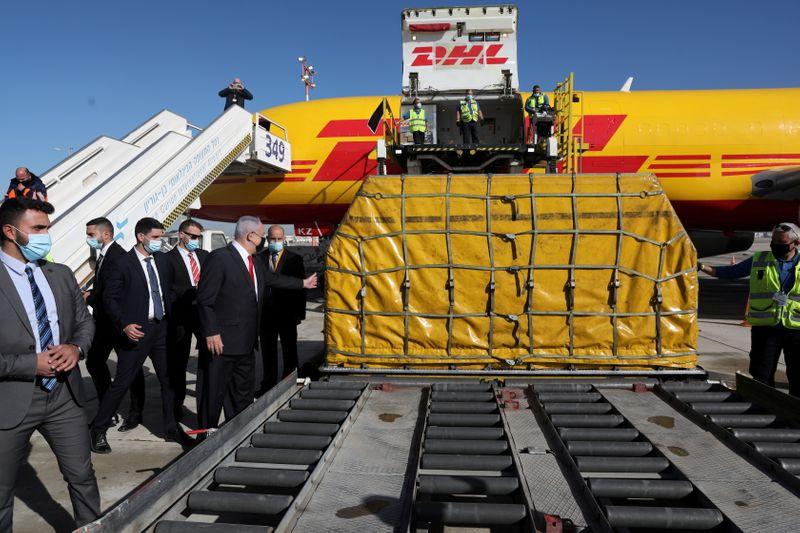 JERUSALEM (Reuters) - Israel received its first shipment of coronavirus vaccines on Wednesday and a distributor predicted the country would have enough for about a quarter of the population by the end of the year.

A cargo plane landed at Ben Gurion Airport carrying what officials said were tens of thousands of doses of Pfizer Inc. vaccines for a trial run of transportation and storage procedures.

"I believe in this vaccine. I expect that it will get the requisite (regulatory) approvals in the coming days," Prime Minister Benjamin Netanyahu said in an airport ceremony, adding that he intended to be the first Israeli to be vaccinated.

Israel will begin administering the vaccines on Dec. 27 and is prepared to vaccinate 60,000 of Israel's 9 million citizens per day, Netanyahu said in a televised address later on Wednesday.

Pfizer and its partner BioNTech agreed last month to provide Israel with 8 million doses of the vaccine, which Britain became the first country to administer on Tuesday.

An Israeli cabinet member said this week that the Pfizer vaccines would be administered first to the elderly and other high-risk populations.

An executive with distributor Teva Pharmaceutical Industries Ltd. said vaccines would arrive at greater pace during the course of the month.

The Lancet medicine journal estimated in June that 22% of the global population are at "increased risk" of contracting COVID-19.