By Nidal al-Mughrabi and Maayan Lubell GAZA/JERUSALEM (Reuters) - A truce between Israel and Hamas, the Islamist group that controls the Gaza Strip, largely held on Saturday a day after one of the most fierce flare-ups along the volatile border in years. Hamas said it had agreed to the truce with Israel, a day after clashes killed an Israeli soldier and four Palestinians, three of them Hamas fighters. 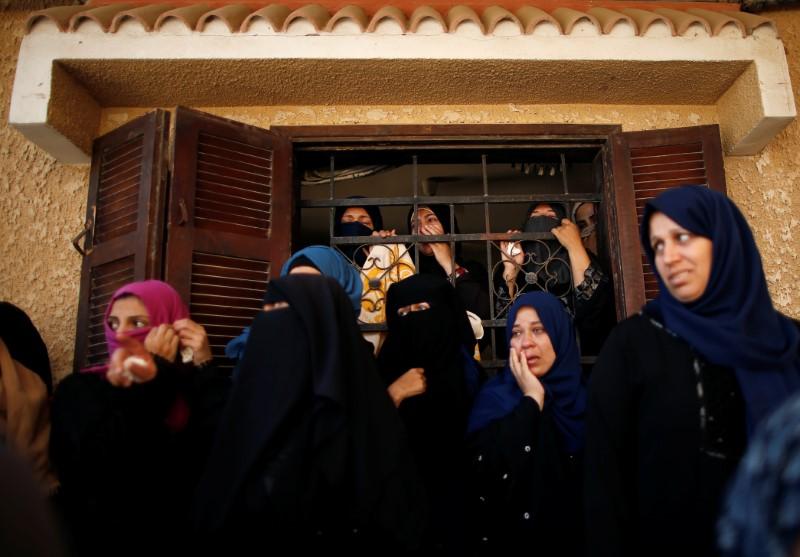 By Nidal al-Mughrabi and Maayan Lubell

GAZA/JERUSALEM (Reuters) - A truce between Israel and Hamas, the Islamist group that controls the Gaza Strip, largely held on Saturday a day after one of the most fierce flare-ups along the volatile border in years.

Hamas said it had agreed to the truce with Israel, a day after clashes killed an Israeli soldier and four Palestinians, three of them Hamas fighters.

A senior Israeli official confirmed a truce was in place.

The Israeli military declined to comment on the ceasefire but a military spokeswoman said civilians could resume normal activities.

In what appeared to be an isolated incident, with no reports of casualties, an Israeli tank fired on a Hamas post in Gaza after Palestinian suspects breached the border fence and entered Israeli territory before retreating back into Gaza, the military said.

There were no other reports of unrest in the area by 1300 GMT on Saturday.

On Friday, Palestinian gunmen killed an Israeli soldier and the Israeli military launched dozens of strikes that killed three Hamas fighters. A fourth Palestinian was killed by Israeli gunfire during a protest near the border.

"With Egyptian and United Nations efforts it has been agreed to return to the era of calm between (Israel) and Palestinian factions," said Fawzi Barhoum, spokesman for the Hamas Islamist group that controls Gaza.

The soldier was the first member of Israel's army to be killed on the Gaza front since a seven-week 2014 war between Israel and Hamas, a military spokesman said.

During the flare-up which lasted several hours, the Israeli military said its jets and tanks hit 68 Hamas targets, and destroyed "buildings and infrastructures and revoked significant military and command and control capabilities."

"Hamas took a huge blow yesterday and through the Egyptians asked for a ceasefire," said a senior Israeli official, who spoke on condition of anonymity.

The Israeli strikes shook buildings in Gaza and fire lit the night sky. Pillars of thick smoke rose from the sites that were bombed. The sounds of sirens from ambulances racing through the streets were heard by residents bracing for an escalation.

Egyptian, Qatari and United Nations officials held contacts with Hamas and Israel in an effort to restore calm and prevent an upsurge in violence, Hamas official Taher Nono told Reuters.

Over the past few weeks the Israel-Gaza border has seen some of the worst violence since the 2014 war. The ceasefire is the third between Israel and Hamas to be brokered by Egypt this year and the second truce to be agreed this week after a day-long fighting last Saturday.

Weekly clashes at the Israel-Gaza border have kept tensions high for months. At least 140 Palestinians have been killed by Israeli forces during protests at the frontier held every week since March, including one killed during Friday's demonstration and more than 200 others injured, many of them by teargas.

During this time, fires caused by incendiary helium balloons and kites launched by Palestinians in Gaza over the border have ravaged tracts of Israeli farmland. Israel has vowed to stop the attacks, even at the risk of wider conflict.

The Israeli official said Hamas had promised the Egyptians they would "end the fire terrorism and the terrorism along the border fence."

But Hamas' Nono said the truce would not mean Israel would gain the upper hand. "We will not allow an (Israeli) imposition of new equations on the ground," he told Reuters.

Israel says Hamas has been orchestrating the demonstrations, dubbed The Great March of Return, to provide cover for militants' cross-border attacks. Hamas denies this.

Protest organizers say they are demanding the right to return to lands lost to Israel in the 1948 war of its foundation and for an Israeli-Egyptian blockade to ease.

Israel and Egypt say the blockade is meant to curb security threats posed by Hamas and other armed groups.

The surge in violence comes as Palestinian hopes for an independent state have dwindled and peace talks remain stalled. Gaza, home to 2 million people, most of whom depend on foreign aid, has been under Israeli economic sanctions for 12 years.