By Ahmed Rasheed and John Davison BAGHDAD (Reuters) - Iraqi security forces shot dead at least six anti-government protesters in Baghdad on Thursday, police and medical sources said, as weeks of deadly unrest showed no signs of abating. Another 38 people were wounded in the clashes near the Shuhada Bridge, they said, as mass demonstrations continued for a 13th straight day with thousands thronging central areas of the capital. In southern Iraq, dozens of protesters burned tyres and blocked the entrance to the port of Umm Qasr, preventing lorries from transporting food imports, just hours after operations had resumed, port officials said. 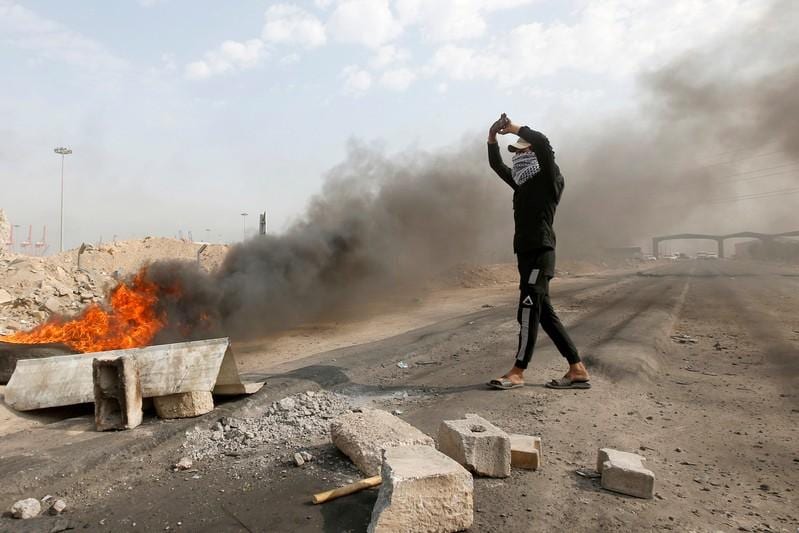 By Ahmed Rasheed and John Davison

Another 38 people were wounded in the clashes near the Shuhada Bridge, they said, as mass demonstrations continued for a 13th straight day with thousands thronging central areas of the capital.

In southern Iraq, dozens of protesters burned tyres and blocked the entrance to the port of Umm Qasr, preventing lorries from transporting food imports, just hours after operations had resumed, port officials said.

A crackdown by authorities against mostly unarmed protesters has killed more than 260 people since unrest broke out on Oct. 1 over lack of jobs, poor prospects and corruption.

The country is beginning to feel the pinch of the unrest, which started in Baghdad and spread to southern cities.

Meanwhile, internet outages imposed by the government to try to stem unrest have hit the private sector, a central bank source said.

The internet returned briefly in most parts of Iraq on Thursday but went out again after 1:00 p.m. local time (1000 GMT). Authorities have heavily restricted internet access during the protests.