Iraq: Kerry warns PM Maliki not to cause trouble

Sydney: US Secretary of State John Kerry today warned Iraqi Prime Minister Nuri al-Maliki not to cause
trouble as he threw his weight behind newly-elected President Fuad Masum to help fight Islamic militants.

His comments came after Maliki yesterday announced on state television he would be filing a complaint against Masum and as troops and police massed in the capital Baghdad. 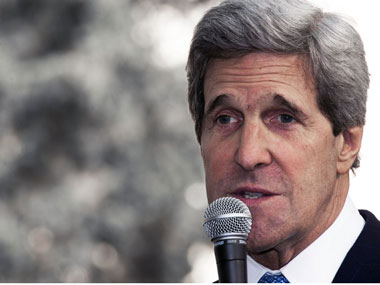 Masum's election on Thursday is another step towards forming a government which could see the embattled Maliki replaced as prime minister, even though his party won the largest bloc in April parliamentary elections.

"We stand absolutely squarely behind President Masum (who) has the responsibility for upholding the constitution of Iraq," Kerry said in Sydney, where he will attend annual US-Australia military talks.

"He is the elected president and at this moment Iraq clearly made a statement that they are looking for change."

Maliki, who has been under huge pressure to give up his bid for a third term in office, announced his plans to file a complaint to the federal court in a surprise address at 2100 GMT yesterday.

He alleged that Masum, a Kurdish politician, had twice violated the constitution, including by failing to task a prime minister-designate with forming a new government.

Kerry urged calm and called for the constitutional process to be completed.

"Among the Shias it is very, very evident that they have three candidates or so for prime minister. None of them are Mr Maliki," he said.

"So what we urge the people of Iraq to do is to be calm. "There should be no use of force, no introduction of troops or militias into this moment of democracy for Iraq.

"Iraq needs to finish its government formation process and the United States will do everything possible in order to support the upholding of the constitution."

He added that Washington believed "the vast majority of the people of Iraq are united in an effort to be able to have this peaceful transition".

"We believe that the government formation process is critical in terms of sustaining the stability and calm in Iraq," Kerry said.

"Our hope is that Mr Maliki will not stir those waters.

"One thing all Iraqis need to know — that there will be little international support of any kind whatsoever for anything that deviates from the legitimate constitutional process that is in place and being worked on now."