Beijing: An Indian diplomat was injured and hospitalised following an assault by a large group of Chinese traders in a court, as he tried to secure the release of two Indians who were held hostage by locals, demanding payment of their dues in the eastern business hub of Yiwu.

S Balachandran, a diplomat at the Indian Consulate in Shanghai was rushed to hospital when he fainted after being "manhandled" by the crowd that tried to snatch two kidnapped Indians who clung to him. The incident happened when he was leaving the court after prolonged negotiations on the night of December 31.

The two Indians had been held hostage by the local traders for two weeks for non-payment of dues by their company, whose owner had allegedly fled the country. 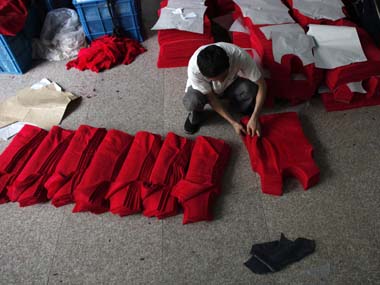 A worker at a factory in Yiwu, China. An Indian diplomat was hospitalised following an assault by Chinese traders in a court, as he tried to secure the release of two Indians working in the city, held hostage by locals. Reuters

Riva Ganguly Das, the Consul General of the Shanghai Consulate of India told PTI here that Balachandran, working as Consul at the Consulate fainted when he was "manhandled", while attempting to get the release of Deepak Raheja and Shyamsunder Agrawal.

Balachandran, 46, tried to negotiate for their release for over five hours at a court in Yiwu, a big trading centre for a host of commodities. He was assaulted when the two Indians, being held captive for over fortnight clung on to him to leave the place.

The incident took place in the court and in the presence of police and the judge. A high drama ensued as the crowd prevented the two from going along with him demanding that they pay millions of Yuan owed to them for commodities purchased from them.

However, a source who refused to be named denied media reports that the diplomat had been attacked by an angry crowd for defending the two businessmen on trial.

The source said, the diplomat, S Balachandran from the consulate in Shanghai, was not allowed to leave the courtroom to treat his diabetes during a hearing that lasted for five hours. He then collapsed and was taken to a hospital for treatment, said the Indian government source, who declined to be named.

"We have taken it up pretty strongly with the Chinese, that this is no way to treat a diplomat, that he should be allowed access to medication," the source said.

In New Delhi, China's diplomatic mission will be called to India's foreign ministry, the source said, while the consul general in Shanghai spoke with the government of Zhejiang province, where Yiwu is located.

Yiwu is a small city known for manufacturing and a commodities wholesale market that attracts traders from across Asia.