New York: US President Barack Obama's visit to India is a powerful symbol of the new energy that he and Prime Minister Narendra Modi have brought to India-US relations and the American leader will see a new India that feels much more confident about its role as a rising power, analysts have said.

Council on Foreign Relations' senior fellow for India, Pakistan and South Asia Alyssa Ayres said that Modi is demonstrating willingness to break some of the older "truisms about wanting to have equal ties with all great powers". 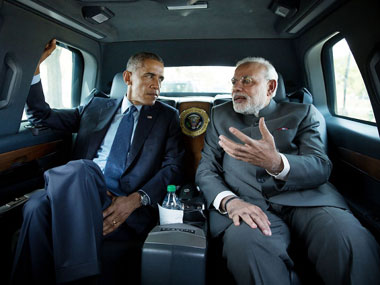 "Modi doesn't have any of the hang-ups that previous predecessors might have had about what will it mean if he appears too close, or appears to be leaning too far in the direction of the United States. He just simply doesn't care.

"He seems to think that the United States is a country that's going to be supportive for the economic transformation that he wants to deliver to Indian citizens. And he'll be able to develop close ties with the US," Ayres said in a media call on Obama's trip to India.

She added that unlike the previous UPA regime, the new Indian government is looking at economic growth as the single most important vehicle through which India can eradicate poverty.

"Modi has spoken about not wanting to merely alleviate poverty, but rather to eradicate poverty. So that's kind of driving what you see happening - government policies focused on creating a new manufacturing sector.

"So for the president landing in India now, he's going to see a country that's right now infused with confidence about where they are in the world.

"India feels much more confident about its role as a rising power - what it can do on the world stage, how its economy can continue to grow, the kinds of innovations India has been heralded for making, particularly in what's called frugal innovation. All of that is part of this sort of new India that we see growing.

"The president is going to have a good opportunity to see lots of new and different things since he was last there," Ayres said.

She said bilateral conversations between the leaders could focus on clean energy and climate change, civil nuclear cooperation, defence and economic ties.

Marshall Bouton, Senior Fellow for India at the Asia Society Policy Institute, said that Obama's unprecedented visit as Republic Day chief guest is a "powerful symbol of the new energy he and Prime Minister Modi have brought to India-US relations".

"Only eight months after Narendra Modi's historic rise to power, the two leaders have dramatically changed the atmosphere between the two governments from discontent to hopeful possibility. The challenge for the two leaders now is to match the symbolism with substance and the possibility with action," he said.

Anubhav Gupta, senior programme officer at the Asia Society Policy Institute, said the trip is "indisputably historic" but the summit will be a test for both governments.

"Though the two sides have had little time to work on joint initiatives since Modi's September visit (to the US), concrete signs of progress would help show that both sides are determined to strengthen their ties," he said.

Gupta pointed out that renewing the defence framework for another 10 years is an obvious and important step as both sides have already expressed their willingness to renew this important strategic document.

Another lingering item that the two leaders could focus on is the vexed nuclear liability issue, which has so far deterred American nuclear suppliers from entering the Indian market, he said.

He said the two leaders are expected to discuss areas of shared interest.

However, major agreements on economic and trade issues are unlikely due to domestic politics, policy differences between the countries — on issues including intellectual property, work visas and taxation — as well as a lack of clarity regarding India's economic reforms at this time.

"Areas in which progress is more likely are regional security and counter terrorism, as well as energy and climate change," Gupta said.

Bouton said expanding trade and investment are the "ballast in the ship of India-US relations" that keep it moving forward even in periods of official differences.

"Modi and Obama should endorse objectives such as the long-stalled bilateral investment treaty or India's membership in Asia-Pacific Economic Cooperation that will signal their commitment to greater economic interaction.

"Increasing India-US cooperation on defence and homeland security has been an area of significant progress right through the recent downturn in relations and will almost certainly be a focus of the Modi-Obama meeting," Bouton said adding that in the aftermath of the Paris terror attacks, the two leaders might well give their blessing to new joint counter terrorism activities.