India-US meet: Can Obama look into Modi's eyes and see his soul?

It will not be quite a "historic" tea ceremony as happened in Japan. The last historic tea ceremony the Americans had was when they dumped boxes of East India Company tea into the Boston harbour in 1773.

No chai pe charcha but Narendra Modi will meet Barack Obama over two separate days in September, not just one. "The fact that there will be interactions over two days is a signal of the importance we place on the US-India relationship," says Obama’s National Security Council spokeswoman Caitlin Hayden.

But don’t expect the Modi-Abe bromance. These are two men cut from very different cloth. 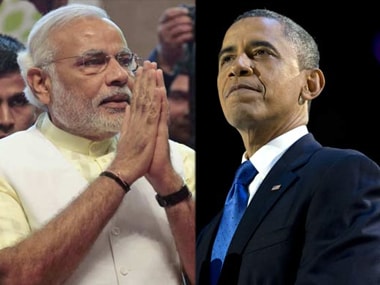 Obama, writes Tunku Vardarajan in The Daily Beast, is “an exquisitely calibrated product of American liberalism” and the “acme of political correctness (notwithstanding the odd drone directed at ‘AfPak’).” Modi, he writes, in contrast, is a “blunt-spoken nationalist, opposed to welfare, and to the ‘appeasement’ of minorities.”

Vardarajan guesses that the two in their heart of hearts, likely have “vigorous contempt” for each other. In fact, an unsubstantiated story by K P Nayar in The Telegraph had Obama telling a closed door group of wealthy donors that he “continued to have concerns over Modi’s past.”

Whether that story is apocryphal or not, any “concerns” will be kept firmly under wraps on 29 and 30 September. That will not be that difficult. It’s a meeting, not a US Open final where one player has to emerge as the winner.

Instead the chances are both sides will strive to play up points of synergy. "There are few places in the world other than India and the US where the son of a tea-seller in a small time town can rise to be the Prime Minister or the child of a Kenyan father can rise to be president," said US Defence Secretary Chuck Hagel on his recent visit to India.

If Obama’s father had grown coffee beans the parallels would have fit a little better.

But the elephant in the room — that visa denial — will remain. "The Americans should be even more cautious and curious to see if there is unhappiness from the Indian side," says foreign policy analyst Kanwal Sibal to IndiaWrites.com. While a “pragmatic” Modi will obviously not bring it up, Sibal says unlike Manmohan Singh he has "no reputation of being particularly pro-American" either, forcing the Americans to work “extra hard to build a personal relationship with him.”

For Modi’s supporters, this is not a visit as much as it’s a victory lap for him in a country which had him on a visa denial list for years. That’s why instead of the usual meet-and-greet with the community at some hall or auditorium, Modi is choosing to hold what amounts to being a “victory rally” at Madison Square Garden. While the target audience is the Indian community, its message will not be lost on his American hosts either. Modi will play rockstar on their home turf.

Luckily for Obama, the visa denial was not on his watch. Aziz Haniffa reports in India Abroad that at an 2 April fundraiser, Obama claimed he did not even know about the “visa situation.” “But this is not right and I will ask the White House staff to prepare a brief for me and I will act on it,” Obama told the donor saying he wanted to have “great relations with India.”

“Trust me, I will take care of it,” Obama apparently reassured the donor.

In fact, the visa refusal would be far less of an issue now and water way under the bridge if there was a sense that the two men had personalities that were more in sync.

Superficially one could say there is a similarity. Both love public speaking. Both have an appeal that often overshadows their party. Neither were the establishment favourites for the top post. Modi’s election campaign, says Payal Kamat on IndiaAtLSE used many of Obama’s winning tactics – building a NaMo brand llike the MyBO brand, a heavy use of social media from Twitter to Google hangouts, and an India 272+ initiative like the Barack Obama dashboard.

There is even a certain rhetorical resonance.

Obama is famous for saying there were no red (Republican) states or blue (Democratic) states, just the United States of America. Modi has said his government’s religion would be India first. But the context of those statements are completely different. Modi was brushing aside concerns that he would impose Hindutva on India and signaling his distaste for what he dubbed the politics of appeasement and tokenism. Obama is the poster boy of “can’t we all get along” inclusivity, including Republicans in his cabinet and almost jeopardizing his health care reform by trying to accommodate all sides.

The fundamental difference is, as Vardarajan says, Obama “can barely bring himself to embrace the notion of America exceptionalism” while Modi is an unapologetic “Indian exceptionalist” who wants to hold India up, not as a sort of preachy non-aligned descendant of Gandhi but as a “strong India that is accorded respect by other nations, and that also pulls its weight in the world.”

Obama, on the other hand, is still more in thrall with the idea of a different India – the cerebral soft-spoken Manmohan Singh, his Hanuman locket, and the inspiration he found as a young man in the life of Gandhi, as he told the Indian parliament in 2010, to “be the change we seek in the world”.

Oddly the man who might have more in common with Modi is Obama’s predecessor, George W Bush – with his plainspoken assertive manner, his carefully cultivated image of a Washington outsider, contemptuous of its liberal elite and his full-throated embrace of India. And Amit Shah and Karl Rove could swap many a story about canny campaigns. But awkwardly, it’s under Bush’s watch that the travel visa ban first happened.

Bush famously looked into Vladimir Putin’s eyes and “got a sense of his soul” – “a man deeply committed to his country”, straightforward and trustworthy.

There will probably be no such eye-to-soul encounter between Obama and Modi.

Instead there will be plenty of re-warmed rhetoric about "renewed commitment" to the "special" relationship between the world’s biggest democracy and the world’s oldest democracy, just enough for both sides to call it a win-win and go home. Meanwhile for the first time ever, US companies like McDonald’s, Abbott Labs, Emerson Electric and Devry University have signaled an interest in taking part in the Vibrant Gujarat summit which Modi will inaugurate in 2015.

That might be more significant than all the pretty speeches in Washington.