Hanoi: India on Saturday extended $500 million Line of Credit to Vietnam for facilitating deeper defence cooperation with the south east Asian nation, as the two countries elevated their ties to a Comprehensive Strategic Partnership to respond to emerging regional challenges.

He said the two sides recognised the need to cooperate in responding to emerging regional challenges. 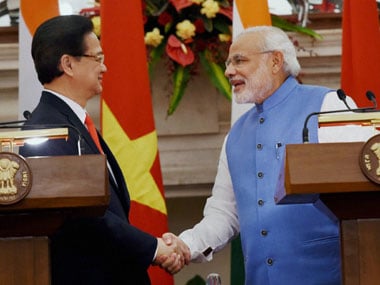 Vietnam had earlier Strategic Partnership only with Russia and China.

Modi, who arrived here on Friday on his maiden visit to the country, described his talks with Vietnamese counterpart as "extensive and very productive" and said they covered the full range of bilateral and multilateral cooperation.

"I am also happy to announce a new Defence Line of Credit for Vietnam of USD 500 million for facilitating deeper defence cooperation," he said.

"Our common efforts will also contribute to stability, security and prosperity in this region," he said.

An agreement on construction of offshore patrol boats was also signed by the two sides, signalling a step to give concrete shape to defence engagement between the two nations.

"The range of agreements signed just a while ago point to the diversity and depth of our cooperation," Modi said, adding the agreement on construction of offshore patrol boats is one of the steps to give concrete shape to bilateral defence ties.

He said as the two important countries in this region, India and Vietnam feel it necessary to further their ties on regional and international issues of common concern.

Modi also announced a grant of $5 million for the establishment of a Software Park in the Telecommunications University in Nha Trang.

"We agreed to tap into the growing economic opportunities in the region," said Modi, the first Indian premier to visit the country in 15 years.

Noting that enhancing bilateral commercial engagement is the strategic objective of the two nations, he said, "For this, new trade and business opportunities will be tapped to achieve the trade target of $15 billion by 2020."

Besides seeking facilitation of ongoing Indian projects and investments in Vietnam, Prime Minister Modi said he has invited Vietnamese companies to take advantage of the various schemes and flagship programmes of the Indian government.

"As Vietnam seeks to empower and enrich its people, Modernise its agriculture; Encourage entrepreneurship and innovation; Strengthen its Science and Technology base; Create new institutional capacities for faster economic development; and Take steps to build a modern nation, India and its 1.25 billion people stand ready to be Vietnam's partner and a friend in this journey," Modi told his Vietnamese counterpart.

Speaking about the framework agreement on Space Cooperation, he said it would allow Vietnam to join hands with Indian Space Research Organisation to meet its national development objectives.

Hoping for an early establishment and opening of the Indian Cultural Centre in Hanoi, he said, "The Archaeological Survey of India could soon start the conservation and estoration work of the Cham monuments at My Son in Vietnam."

He also thanked Vietnam's leadership in facilitating inscription of Nalanda Mahavihara as a Unesco World Heritage site earlier this year.

Noting that Asean is important to India in terms of historical links, geographical proximity, cultural ties and the strategic space that the two sides share, he said, "It is central to our 'Act East' policy. Under Vietnam's leadership as Asean Coordinator for India, we will work towards a strengthened India-Asean partnership across all areas."

Modi also expressed the need to "stay focussed to keep up the momentum" in bilateral ties and invited the Vietnamese leadership to India.