New York: Pakistan Prime Minister Nawaz Sharif has set himself to mending two of the original fault lines in Pakistan: the civil-military divide and relations with India. Sharif recently used a one-hour meeting with Prime Minister Manmohan Singh in New York in September to defuse border tensions. But is Sharif above old tricks that can fatally sabotage?

Hussain Haqqani, a former adviser to Sharif who now teaches at Boston University, is forthright in his new book that Sharif is a snake in the grass. Haqqani was the Pakistani ambassador to the United States from 2008 to 2011. 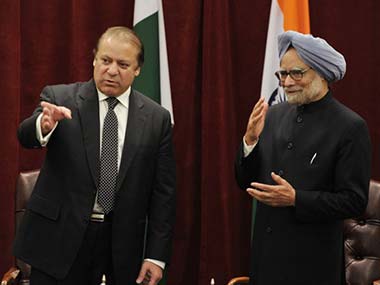 According to Haqqani’s account, Sharif asked Pakistan’s ISI spy agency in May 1992 to continue its covert operations in Kashmir, despite being warned by Washington that Islamabad risked being designated “a state sponsor of terrorism.”

The former Pakistani diplomat says the US warning simply sloughed off Sharif’s back. He continued to support the ISI’s dubious meddling in Kashmir and promptly allocated $2 million towards a PR-drive aimed at softening up American lawmakers and changing the anti-Pakistan narrative in the US media.

The book discloses Sharif asked his former adviser Haqqani to lead the lobbying push in Washington, but he refused. Not surprisingly, Haqqani then found himself in the relative wilderness of Sri Lanka on an ambassadorial posting.

Sharif dramatically hosted Indian prime minister Atal Behari Vajpayee in 1999 – but the Pakistan army-initiated Kargil war a few months later scuppered that peace initiative. The Kargil war was under Sharif’s watch but he said he didn’t know what former general Pervez Musharraf was up to. Musharraf says otherwise but then the general’s affiliation with the truth is desultory. Musharaff asserted that Sharif had been briefed on the Kargil operation 15 days ahead of Vajpayee's journey to Lahore on February 20.

“As far as terrorism is concerned, Pakistan was the conduit of weapons and training for the jihad in Afghanistan against the Soviets. After that, Pakistan switched it to India, especially in Kashmir. And that is the point at which the United States said "You are engaging in terrorism," Haqqani told Reuters. Sharif has said all the right things about improving relations with India – he will work to grant India the Most Favored Nation status, the most achievable goal in the near term. But it remains to be seen whether Sharif will rein in Jamaat-ul-Dawa’s chairman Hafiz Saeed, who is wanted in India for fomenting the 2008 Mumbai attacks or the Lashkar-e-Taiba.

Making it clear why he is persona non grata in his homeland, Haqqani says that US military aid has undermined Pakistan’s democracy, converting it into a rentier state living off American money rather than its people’s productivity.

Haqqani’s distinguished career in government includes serving as an advisor to three Pakistani prime ministers, including Benazir Bhutto, who described him as a loyal friend in her last book "Reconciliation."