By Sanjeev Miglani and Steve Holland NEW DELHI/WASHINGTON (Reuters) - U.S. President Donald Trump will be accorded the biggest public reception given to any foreign leader in years during his visit to India beginning on Monday, officials say, one that could help paper over the two countries' growing friction over trade. Close political and security partners, India and the United States have hit each other with retaliatory tariffs 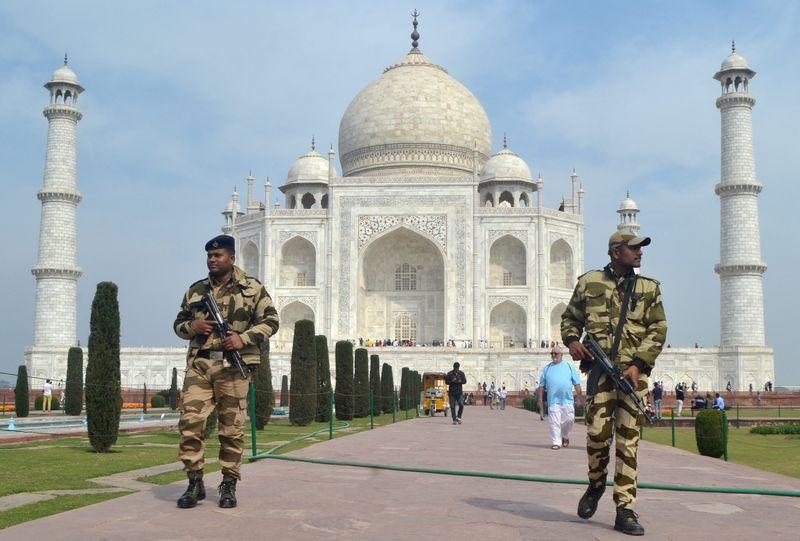 By Sanjeev Miglani and Steve Holland

NEW DELHI/WASHINGTON (Reuters) - U.S. President Donald Trump will be accorded the biggest public reception given to any foreign leader in years during his visit to India beginning on Monday, officials say, one that could help paper over the two countries' growing friction over trade.

Close political and security partners, India and the United States have hit each other with retaliatory tariffs. Over the past month they have engaged in intense negotiations to produce a mini-trade deal, but officials in both countries say it remains elusive.

The two sides have been arguing over U.S. demands for access to India's huge poultry and dairy markets, Indian price controls on medical devices such as stents and stringent local data storage rules that U.S. technology firms say will raise the costs of doing business.

Prime Minister Narendra Modi's government has sought restoration of trade concessions that Trump withdrew in 2019 and greater access to U.S. markets for its pharmaceutical and farm products. Above all, it says that Trump should not treat India on par with China, whose economy is five times larger.

Trump has been saying in recent days that he may be saving the "big deal" on trade until after the U.S. presidential election in November.

Senior Trump administration officials acknowledged on Friday that the two-day visit would not result in a limited trade deal, saying that Washington still had too many concerns about India's increasing trade barriers.

"We want to address a lot of concerns and we're not quite there yet," a senior Trump administration official told reporters.

U.S. Trade Representative Robert Lighthizer, who has been leading trade talks with India, will not be part of Trump's delegation, which will include the president's daughter, Ivanka, and son-in-law, Jared Kushner.

Hundreds of thousands of people are expected to gather in Modi's political hometown of Ahmedabad to greet Trump for a road show leading to a rally in a cricket stadium with a capacity of over 100,000.

On stage, both leaders will address a bigger version of the "Howdy Modi" rally that they jointly appeared at in Houston to a jubilant crowd of 50,000 Indian Americans last year, where Trump likened Modi to Elvis Presley for his crowd-pulling power.

"From the moment of their arrival at the airport a little before noon on 24th February, the delegates will be treated to a display of famed Indian hospitality and India’s Unity in Diversity," said Foreign Secretary Harsh Shringla.

He said there will be tens of thousands of ordinary citizens as well as artists showcasing the performing arts from different states of the country as part of the India Road Show.

Trump, who will be accompanied by his wife, Melania, on the trip, has been fascinated with the idea of going to India since his visit to Houston, aides said.

Trump prides himself in having large crowds at his campaign rallies, ranging generally from 10,000 to 20,000 people, and has expressed admiration privately at the size of the crowd awaiting him in India, they said.

Hopes among U.S. business groups that Trump and Modi could announce some specific trade measures had faded in recent days as differences over new tariffs, agriculture and digital trade continued.

"If we see a deal, it's going to be minimal and even that doesn't seem to be on the table," said Edward Alden, a senior fellow at the Council on Foreign Relations think tank in Washington.

He added that U.S. officials are pushing back against Modi's "India first" trade protectionism that, ironically, emulates Trump's tariff policies.

Trade experts said it was possible that India could present Trump with some symbolic trade gestures, such as further reducing high import tariffs on large-engine Harley-Davidson motorcycles

The United States has become one of India's top arms suppliers, with $18 billion worth of sales over the last 15 years, edging out traditional supplier Russia.

Trump and Modi are expected to discuss a wide range of issues including trade, 5G telecommunications, counterterrorism, energy security, religious freedom, the rule of law and the importance of the Indo-Pacific region, a senior Trump administration official said.

U.S. energy company Westinghouse is also expected to sign a new agreement with state-run Nuclear Power Corporation of India for the supply of six nuclear reactors, kickstarting a long-running project.