India, Iran and Afghanistan held their first tripartite meeting on Tuesday in Kabul during which implementation of the Chabahar port project and a host of other issues including ways to deepen counter-terror cooperation were discussed, officials said. The Indian delegation was led by Foreign Secretary Vijay Gokhale while the Iranian team was headed by Deputy Foreign Minister Abbas Araghchi. Afghan deputy foreign minister Hekmat Khalil Karzai chaired the meeting.

"The meeting focused on consolidating economic cooperation, including Chabahar, as well as enhancing cooperation on counter-terrorism, counter-narcotics, and continuing support to the peace and reconciliation process that is led and owned by Afghanistan," the three countries said in a joint-statement. It said the three sides agreed to hold the next round of consultation at an appropriate time in India in 2019. Sources said the possible impact of the US sanctions on the Chabahar port project also figured in the meeting. The port in the Sistan-Balochistan province on Iran’s southern coast is being developed by India and Iran are also coming under the US sanctions on Iran. 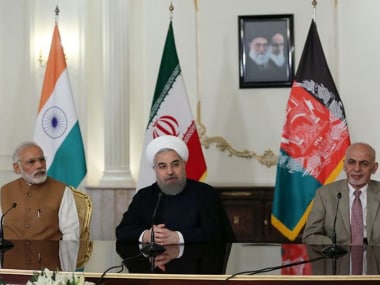 During the two-plus-two talks in Delhi last week with the US, India apprised the American delegation about the strategic importance of Chabahar, particularly for enhancing trade with war-ravaged Afghanistan. The port is easily accessible from India’s western coast and is increasingly seen as a counter to Pakistan’s Gwadar Port, which is being developed with Chinese investment and is located at distance of around 80 km from Chabahar. The first phase of the Chabahar port was inaugurated by Iranian President Hassan Rouhani in December.

According to Afghan president Ashraf Ghani's spokesman Haroon Chakhansuri, a series of discussions have been held over the past few months with Iranian and Indian officials regarding the possibility of a waiver on a section of Chabahar Port. In the second phase of sanctions, scheduled to come into effect in November, Iran's ports and crude oil exports will be affected. Both the countries will also draw hope from the fact that the US last month granted a waiver for the Azerbaijan natural gas pipeline, DNA reported.

The Chabahar port is being considered a gateway to golden opportunities for trade by India, Iran and Afghanistan with central Asian countries besides ramping up trade among the three countries in the wake of Pakistan denying transit access to New Delhi. Under an agreement signed between India and Iran in May 2016, India is to equip and operate two berths in Chabahar Port Phase-I with capital investment of $85.21 million and annual revenue expenditure of $22.95 million on a 10-year lease.

The discussions come against the backdrop of proposed US sanctions on investments in Iran following Washington’s pull-out from the 2015 Iran nuclear deal. Alice Wells, principal deputy assistant secretary for the bureau of South and Central Asian affairs had said in Washington on Monday that the US would continue discussions on the Iran sanctions with India, Mint reported.

"An informational conversation was held during the 2+2 dialogue in New Delhi last week on Chabahar and the US has taken it under advisement. Talks on the matter between the two sides were ongoing and no decision had been taken on the matter," Wells said, according to the report. The sanctions put into effect from 4 November were designed to bring Tehran to book and not penalize India, she clarified.

According to Indian officials, India was also looking at Iran handing over the Shahid Beheshti port to it for operation in the coming weeks. India is also looking at supporting the development of Chabahar- Zahedan Rail line that will aid the transport of goods to the Afghan border. India plans to use the port as a gateway to the International North-South Transport Corridor.

Meanwhile, earlier on Monday, India and Afghanistan agreed to enhance cooperation under the New Development Partnership as part of which New Delhi had announced taking up 116 "high impact community developmental projects" in the war-torn country. The decision to scale up cooperation and collaborate on infrastructure and high impact community development projects was taken at the third meeting of the Joint Working Group on Political and Security Cooperation (JWGPSC) between India and Afghanistan in Kabul, a Ministry of External Affairs (MEA) statement said.

India had announced taking up 116 "high-impact community developmental projects" in 31 provinces of Afghanistan after a meeting between External Affairs Minister Sushma Swaraj and Ghani in New York in September 2017. The outcome of the first and second meetings of the were also reviewed and assessed positively on Monday at the meeting co-chaired by Karzai and Gokhale.

"Both sides stressed the need to continue working together towards a stable, peaceful and prosperous region that is free from terrorism and extremism," the statement said. Both sides discussed Indian assistance to Afghanistan and regional issues of mutual interest, and agreed that bilateral cooperation strengthens political and economic stability in the region. India and Afghanistan also agreed to strengthen security cooperation and the Indian side reiterated its support for an Afghan-led and Afghan-owned peace and reconciliation process, the statement said.

The two sides also expressed satisfaction over the successful completion of several development projects such as the Afghan Parliament building, Storay Palace, and Afghan-India Friendship Dam. It was also decided that the fourth meeting of the JWGPSC would be held in New Delhi on mutually convenient dates in 2019.