The Indian government has for once shown itself to be both courageous and independent in its dealings with other nations by defying unilateral ukases issued by the United States (US). Thus, its decisions to go ahead with the purchase of five S-400 Triumf missile defence systems from Russia in a big-ticket defence deal and maintain commercial ties with Iran in the shape, mainly, of crude oil purchases.

I will focus on the latter. To begin with, the sanctions imposed against Iran have no legal backing. They are unilateral and have not been routed through the United Nations (UN). No country is bound to play along with Uncle Sam’s ingrained prejudices and strategic interests. Moreover, the International Court of Justice (ICJ) has ruled less than a week ago that the sanctions must be lifted, in so far as they apply to the movement of humanitarian goods. Unsurprisingly, the United States has contested this judgement. Secretary of state Mike Pompeo, a pugnacious West Asia hawk-like his boss, President Donald Trump, has said that the ICJ has no jurisdiction (its rulings are binding and cannot be appealed, even though the court has no means of ensuring compliance). He has also said that the United States will abrogate the ‘Treaty of Amity’ between the two countries signed in 1955, on which the ICJ ruling was based. In this context, there can be no earthly reason for New Delhi to kowtow to Washington’s dictates, other than a desire to adopt a supine and spuriously unquestioning reliance on the United States. 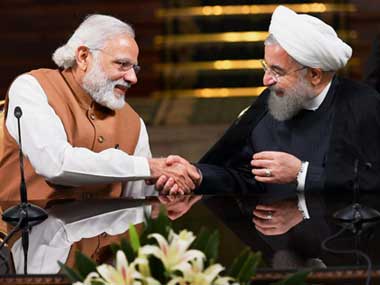 There is more, however. Trump’s animosity towards Iran is based on a particular view of its interests in West Asia. Its two main allies in the region are Israel and the Saudi Arabia-led Gulf alliance. Washington’s calculations are not hard to decode. Israel is, of course, a prohibited area for both strategic and deeply etched ideological reasons. No US administration will ever do anything that even remotely risks alienating Tel Aviv. Saudi Arabia is a strategic ally, being one of the biggest producer of crude oil in the world and the principal supplier to the United States. Its often deranged delinquencies must be condoned. The US accuses Iran of two things, principally. First, it says that the international nuclear deal signed with Iran is worthless because the country has not suspended its nuclear arms programme in response to the easing of sanctions Washington has pulled out of the deal that Barack Obama, the former president, signed up to alongside the European Union (EU) in 2015. Second, it accuses Iran of fomenting terror in West Asia by extending moral and material support to militant groups like the Hezbollah.

The first charge is patently untrue. Periodic inspections by international monitoring agencies have certified that Iran is, in fact, in compliance with the agreement. The European Union (EU), too, has rubbished the positions taken by the Trump administration because the deal is crucial to its security. The foreign ministers of the EU, France, Germany and the United Kingdom issued a statement in early August saying that they would do everything within their powers to ensure that entities engaged in legitimate trade with Iran could continue to do so unhindered, though some companies have pulled out. India is in a similar position now. Even though the government is sticking to its commitments, faced with payment problems that will kick in from 4 November, when the sanctions become operational, some companies have stopped purchases. China and Russia, also signatories to the agreement, are obviously not going to play ball. The ‘tough’ sanctions envisaged by the Trump administration will hopefully prove to be infructuous.

The second charge has greater substance. It is true that Iran supports the Hezbollah and the Huthi rebels in Yemen. The reasons for doing so is the protection of Shia communities in the Arab world, for instance in Iraq, and the propagation of its influence in the region. To condemn Iran unreservedly for following its strategic interest, would be both unfair and naïve. After all, the US’s allies in West Asia are also guilty of supporting terrorists in other West Asian countries. Saudi Arabia’s most important export throughout the world, apart from petroleum, is, lest we forget, the Wahhabi brand of Islam, that toxic fount of global terrorism. Saudi Arabia is also the most significant exporter and backer of terrorism. Al-Qaeda and its former leader Osama bin Laden — a Saudi national — are prime examples.

Saudi Arabia is also the perpetrator of possibly the dirtiest war being fought in the word today – in Yemen, where it has indiscriminately bombed civilians and innocents, including children and hospitals using sophisticated US-supplied weaponry. Israel’s human rights abuses in the West Bank and Gaza Strip and its blatant disregard for the sovereignty of other nations and all its appurtenances is the stuff of legendary notoriety. That it can pursue its illegal activities with impunity is a blot on the international community’s already soiled and tattered escutcheon.

So, when the US talks of Iran’s destabilising influence in West Asia and the Gulf region, we need to ask of ourselves all the questions we try to keep in abeyance. It is, of course, true that Iran is a theocratic state and, as is true of all theocratic states including Saudi Arabia and Israel (whatever it and its backers say), is involved in some serious human rights abuses. There are international agencies tasked with bringing such countries to book. This problem does not fall within Uncle Sam’s bailiwick.

But it would not be out of place to take a small peek at the historical record to investigate how Iran became a theocratic state. In the early twentieth century, Iran underwent a process of constitutional reform (1905-1909). Under a constitution modelled on Western exemplars, a legislative body was created, though the monarchy was retained. The Majlis (parliament) had significant legislative rights and elected executives were accountable to it. To all intents and purposes, Iran became a constitutional monarchy. Iran was, however, in economic turmoil and it suited the world’s largest colonial power, the United Kingdom (UK), to keep matters that way. Elected governments were destabilized and with the US getting into the act in 1925, Colonel Reza Khan seized power after a coup with the backing of the two forces. Khan adopted the traditional name of Pahlavi and became an autocratic ruler: The Shah of Iran. The power of the constitutional reforms, however, forced him to continue with elected, though severely attenuated, governments. As discontent and opposition to the Shah’s rapacious and brutal kleptocracy grew apace, so did support for a communist group and a centrist nationalist party, the National Front, led by a charismatic leader Muhammad Mossadeq. In 1951, Mossadeq, who wanted to nationalise the country’s oil reserves, was elected as the prime minister.

As Mossadeq’s power also grew, the Shah was forced to flee Iran in 1953. This was not compatible with the strategic interests of the colonial and neo-colonial powers, to wit, the UK and the US. Together they successfully plotted the overthrow of Mossadeq’s elected government, just another Cold War casualty, reinstated the much-reviled Shah and kept him in power. The forces of Iranian nationalism deprived of a democratic space in which it could grow and flourish, gradually took on the colour of an orthodox Shia nationalism, led by the expatriate Ayatollah Khomeini, who finally overthrew the US-backed kleptocratic Shah and came to power.

The US, and to a lesser extent the UK, are, therefore, historically responsible for the installation of a theocratic state in Iran. And, small wonder, it is the self-same arbiter of the destiny of nations, which is seeking, confessedly, to engineer regime change in Iran — this time around with a hectoring incumbent occupying 1600 Pennsylvania Avenue. India, which has traditionally had friendly ties with Iran, should have none of this delinquency.