New Delhi: Raising the pitch for UN Security Council reforms, Prime Minister Narendra Modi on Thursday asked 54 African nations to join India in demanding an overhaul of the global body to make it more "democratic, inclusive and representative" of the current world.

He said the present day world is facing challenges like terrorism and climate change which did not exist when the UN was founded 70 years back and the global body runs the risk of losing relevance if it does not adapt to the new systems in the world. 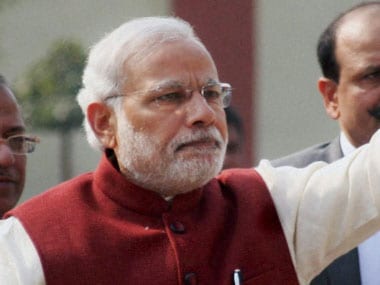 "...India advocates reforms in global political, economic and security institutions," Modi said while interacting with editors from African nations here while replying to a question on New Delhi's quest for UN reforms.
"They (global bodies) must become more democratic, inclusive and representative of our world. No institution will have that character today, if it does not give voice to Africa or the world's largest democracy, constituting one-sixth of humanity. That is why we ask for reforms of the United Nations Security Council and global financial institutions," he said.

Modi, who was talking to the journalists ahead of the India-Africa Forum Summit, said, "India and Africa, constituting one-third of the global population must continue to speak in one voice for these reforms."

Noting that UN now has four times the member countries than it had at its inception, the Prime Minister said, "The world is undergoing political, economic and technological transition on a scale rarely seen in recent history."

Talking about the greater awareness now and the new challenges like terrorism and climate change that the present world faces, he said, "If global institutions and systems do not adapt, they will risk irrelevance."