In wishing Bush well, Putin has message for Obama 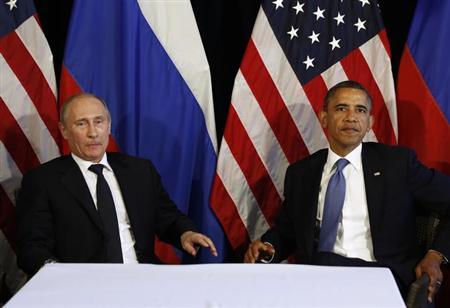 It may have been coincidence that the Kremlin released details of the telegram a day after Barack Obama pulled out of a planned summit with Putin, but little is left to chance in Russian politics.

The warm words to the man who once said he looked Putin in the eye and got a "sense of his soul" highlighted how different the relationship is between the leaders in the Kremlin and the White House now.

Bush described Putin years later as cold blooded, and ties soured over the war between Russia and Georgia which began five years ago this week, but there was respect and camaraderie on display when they first met as presidents in June 2001.

At Obama's most recent meeting with Putin during a G8 summit in Northern Ireland in June, the Russian president scowled, lectured and fidgeted. At times he glowered.

Would a better relationship with Putin have made Obama take a different decision on attending the September talks in Moscow? Perhaps not, but a stronger rapport might have helped them avoid a situation where such a decision was even considered.

"Sometimes, at times of crisis, when diplomats fail to reach a compromise, personal relationships can be important, as a last resort ... There is a lack of personal chemistry between Obama and Putin," said Maria Lipman, a Russian analyst at the Moscow Carnegie Center think tank.

Bush's good start with Putin at talks in the Slovenian capital, Ljubljana, followed four months later by a meeting at Bush's Texas ranch, stands in contrast to the difficult beginning of the Obama-Putin relationship.

When Obama came to Russia in July 2009, Putin was prime minister but still the dominant figure in Russia under the presidency of his protege Dmitry Medvedev, and the former KGB spy invited Obama to his dacha, or country house.

"We may not end up agreeing on everything, but I think that we can have a tone of mutual respect and consultation that will serve both the American people and the Russian people well," Obama told Putin.

Diplomatic sources said that despite this, Putin went on to give Obama a political lecture and they failed to break the ice. Russian officials, however, say Obama was frosty and has always been high-handed.

The relationship has never developed into a friendship, with Obama appearing to find more in common with the relatively liberal Medvedev. During Putin's re-election campaign in 2012, he accused the United States of funding his opponents.

The relationship is also a far cry from the back-slapping bonhomie between Bill Clinton and Boris Yeltsin in the 1990s, when their rapport survived their countries' differences during crises such as the collapse of former Yugoslavia into war.

There is also none of the obvious warmth that Putin has shown over the years to the former Italian and German leaders, Silvio Berlusconi and Gerhard Schroeder. Schroeder called Putin a "flawless democrat" and took a post as chairman of the board of a Russian-German gas pipeline project after leaving office.

At least the Putin-Obama relationship has not been marred by incidents such as the one in 2007 when diplomats say Putin used his big black dog to intimidate German Chancellor Angela Merkel during a meeting at his dacha.

While Putin stakes a lot on personal relationships, Obama likes to focus more on the business at hand, diplomats say. But Obama eventually became frustrated with the lack of progress in Russian-U.S. ties and the failure to build a more constructive relationship.

With differences piling up on problems from Syria to human rights and democracy, Obama vented his frustration on Tuesday after Russia refused to hand over former U.S. spy agency contractor Edward Snowden and granted him a year's asylum.

Obama said on NBC's "The Tonight Show" with host Jay Leno that Moscow sometimes slipped back into a Cold War mentality, although it is now more than two decades since the Soviet Union's collapse, and made clear he saw Putin's hand in this.

"What I say to President Putin is, that's the past and ... we've got to think about the future," he said.

There appears little hope now that relations will improve during Obama's second presidential term. One of the main foreign policy goals of his first term - the "reset" in relations with Moscow - has now unwound.

Each side blames the other. Moscow's position is that the United States has sided with Putin's opponents, harmed trade and political ties by picking fights over human rights issues and tried to lecture Russia on how to behave.

Washington's view is that it has made countless policy proposals that have gone unanswered, most notably on reducing nuclear arms, and that the ball is now in Moscow's court. U.S. officials are not holding their breath. (Editing by Jason Bush and Janet McBride)