Washington: US President Donald Trump is distorting the truth on U.S. economic growth and jobs, pointing to record-breaking figures that don't exist and not telling the full story on black unemployment.

He cites the highest-ever gross domestic product for the US that's not there and predicts a spectacular 5 percent annual growth rate in the current quarter that hardly any economist sees. On black joblessness, he boasts of a "new" record low, but the numbers in fact have recently ticked upward, with greater declines seen during the Obama administration.

The statements marked a week of fiction in which Trump also made erroneous claims about the California wildfires and the Russia investigation and falsely declared that his tariffs on foreign goods will help erase $21 trillion in national debt.

A look at the claims: 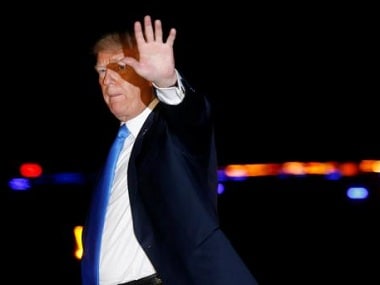 Economy and jobs
Trump: "One new and great FACT — African American unemployment is the lowest ever recorded in the history of our Country. So honored by this." — tweet Friday.
Trump: "I am proud to have fought for and secured the LOWEST African American and Hispanic unemployment rates in history." — tweet Saturday.
The facts: Not exactly. He omits important caveats.
Black unemployment did reach a record low, 5.9 percent, in May. That rate has since risen to 6.6 percent in July.
Despite some recent progress, the black unemployment rate is now nearly double that of whites, which is 3.4 percent. The most dramatic drop in black unemployment came under President Barack Obama, when it fell from a recession high of 16.8 percent in March 2010 to 7.8 percent in January 2017.

"As you know, we're doing record and close-to-record GDP"
Trump: "Economic growth, last quarter, hit the 4.1. We anticipate this next quarter to be — this is just an estimate, but already they're saying it could be in the fives ... I think we're going to be very shortly in the fives." — remarks Tuesday before a group of business executives.
Trump: "As you know, we're doing record and close-to-record GDP." — remarks Tuesday.
The facts: No. These are the latest in a string of exaggerated claims that Trump has made about the U.S. economy.
While economists are generally optimistic about growth, very few anticipate the economy will expand at a 5 percent annual rate in the July-September quarter the president referred to. Macroeconomic Advisers, a consulting firm in St. Louis, forecasts 3.2 percent growth in the third quarter. JPMorgan Chase economists have penciled in 3.5 percent. The Federal Reserve Bank of Atlanta pegs it at 4.3 percent.
Whatever the final number turns out to be, none of these figures represents record or close-to-record growth for gross domestic product, the broadest measure of the nation's output. The 4.1 percent growth in the second quarter was simply the most since 2014.

"Economy has never been better"
Trump: "Great financial numbers being announced on an almost daily basis. Economy has never been better, jobs at best point in history." — tweet 6 August.
THE FACTS: He's exaggerating. The economy is healthy now, but it has been in better shape at many times in the past.
Growth reached 4.1 percent at an annual rate in the second quarter, which Trump highlighted late last month with remarks at the White House. But it's only the best in the past four years. So far, the economy is expanding at a modest rate compared with previous economic expansions. In the late 1990s, growth topped 4 percent for four straight years, from 1997 through 2000. And in the 1980s expansion, growth even reached 7.2 percent in 1984.
It's not clear what Trump specifically means when he declares that jobs are at the "best point in history," but based on several indicators, he's off the mark.
The unemployment rate of 3.9 percent is not at the best point ever — it is actually near the lowest in 18 years. The all-time low came in 1953, when unemployment fell to 2.5 percent during the Korean War. And while economists have been surprised to see employers add 215,000 jobs a month this year, a healthy increase, employers in fact added jobs at a faster pace in 2014 and 2015. A greater percentage of Americans held jobs in 2000 than now.
Trump didn't mention probably the most important measure of economic health for Americans — wages. While paychecks are slowly grinding higher, inflation is now canceling out the gains. Lifted by higher gasoline prices, consumer prices increased 2.9 percent in June from a year earlier, the most in six years.

Russia probe
Trump: "'Bob Mueller, isn't your whole investigation premised on a Fake Dossier, paid for by Hillary, created by a man who hates Donald Trump, & used to con a FISA Court Judge. Bob, I really think it's time for you to give up your phony investigation.' No Collusion!" — tweet Sunday, citing Fox News Channel host Jeanine Pirro.
The facts: Trump quotes in part Pirro to falsely claim that special counsel Robert Mueller's Russia probe is based on a "fake dossier." In fact, the FBI's investigation began months before it received a dossier of anti-Trump research financed by the Democratic Party and Hillary Clinton's campaign. The FBI probe's origins were based on other evidence — not the existence of the dossier.
The Republican-controlled House Intelligence Committee found the Russia probe was initiated after the FBI received information related to Trump campaign foreign policy adviser George Papadopoulos, not the dossier. The committee's final report was praised by Trump.

US tariffs
Trump: "Because of Tariffs we will be able to start paying down large amounts of the $21 Trillion in debt that has been accumulated, much by the Obama Administration, while at the same time reducing taxes for our people." — tweet Aug. 5.
The facts: This isn't going to happen.
The Treasury Department estimates that all tariffs currently in place will raise about $40 billion in revenue in the 2018 budget year, which ends Sept. 30. Even with the recent tariff increases Trump has implemented or threatened to put in place, it clearly wouldn't be enough to reduce the $21 trillion national debt. It's just 5 percent of what the president would need to eliminate the annual budget deficit of $804 billion that the Congressional Budget Office predicts for this year. The national debt represents the accumulation of all the annual deficits.
The president seems to believe that foreigners pay tariffs, but they are import taxes paid for by American businesses and consumers. They may make it harder for other countries to sell things in the United States, but they are just another form of tax and do not result in lower taxes for the American people overall.

Americans on food stamps
Trump: "Almost 3.9 million Americans have been lifted off food stamps — that's since the election. ... That's some number. That's a big number." — Ohio rally on Aug. 4.
Trump: "More than 3.5 million Americans have been lifted off food stamps — something that you haven't seen in decades." — remarks at White House on July 27.
White House: "More than 2.8 million have stopped participating in the Supplemental Nutritional Assistance Program (SNAP) — commonly known as food stamps — since Trump's first full month in office." — information sheet released Tuesday, citing Fox Business report.
The facts: Trump and the White House omit important context and overstate his role in reducing the number of people on food stamps. Nor is it accurate that recent declines are the biggest in decades. It's true, as the White House conveys, that more than 2.8 million people stopped participating in the program during the 15-month period from February 2017, Trump's first full month in office, to May 2018, the latest Agriculture Department data available. But this decline is consistent with a longer-term downward trend in food stamp usage because of an improving economy. Currently there are 39.3 million people in the program; food stamp usage peaked in 2013 at around 47.6 million, following the recession.
For instance, in the 15-month period before Trump's first full month in office, food stamps declined by 3.3 million — larger than the 2.8 million that dropped off under Trump's watch.

California wildfires
Trump: "California wildfires are being magnified & made so much worse by the bad environmental laws which aren't allowing massive amounts of readily available water to be properly utilized. It is being diverted into the Pacific Ocean." — tweet Aug. 6.
The facts: That's not what state experts say.
"We have plenty of water" for battling the massive blazes burning in hills north of San Francisco, said Scott McLean, a spokesman for the California Department of Forestry and Fire Protection. The current spate of wildfires happens to be within range of large Northern California lakes and the state's biggest river, McLean said.
Nor is having enough water a problem in battling California wildfires in general. Firefighting aircraft can dip in and out of cattle ponds or other small bodies of water to scoop up water for dropping and spraying on flames. When fires burn in an area that happens to be without ponds, lakes or rivers, state officials typically call in more planes to ferry in water, McLean said.
California's battles over divvying up water in the arid state are unending, but a battle between firefighters and the Pacific Ocean hasn't been one of them, according to Jay Lund, a civil and environmental engineering professor at the University of California, Davis, and a longtime analyst of the state's water wars.
Trump's claim "is so physically impossible, you don't even really want to respond," Lund said.
For one thing, the wildfires are in the hills, far from the Pacific Ocean and from the man-made storage and distribution system that carries water from California's wetter north to the drier, more populated south.

Trump: "Governor Jerry Brown must allow the Free Flow of the vast amounts of water coming from the North and foolishly being diverted into the Pacific Ocean. Can be used for fires, farming and everything else. Think of California with plenty of Water - Nice! Fast Federal govt. approvals." — tweet Aug. 6.
The facts: Trump is raising an old dispute in California, the country's top farm state: the competition for water between agricultural and environmental groups, fishermen and others who want more water for wildlife and habitat. But the dispute has little to do with firefighting.
Republican lawmakers in California's agriculture-rich Central Valley complain the state and federal governments allow too much of the state's rainfall and snow melt to flow naturally through rivers and into the Pacific Ocean, instead of being diverted for irrigation.

Veterans
Trump: "The Democrats are obstructionists. The only thing they do well, they're lousy politicians, they have horrible, stupid policies. You know, let's get rid of law enforcement, let's get rid of our military, let's not take care of our vets — all of these things. ... They'll do anything they can really to obstruct or resist." — remarks Aug. 4 at Ohio rally.
The facts: On the contrary, in regards to veterans' issues, every major bill signed into law by Trump has passed with strong support from both Republicans and Democrats. In one case, House Democrats did block an emergency funding bill for the Veterans Choice private-sector program after veterans groups complained that it focused on too much private care instead of core VA programs. The Democrats' dissent resulted in additional funding for both private care and VA programs in the revised bill.
More recently, Robert Wilkie was confirmed by the Senate to serve as VA secretary on an 86-9 vote. It was a moment of strong bipartisan display compared to the partisan discord over other Trump nominees.