By Joseph Menn and Jeffrey Dastin SAN FRANCISCO (Reuters) - Hundreds of workers from Google, Amazon and other technology companies on Friday joined climate-change marches in San Francisco and Seattle, saying their employers had been too slow to tackle global warming and needed to take more drastic action. While students set the global agenda and led local marches, U.S 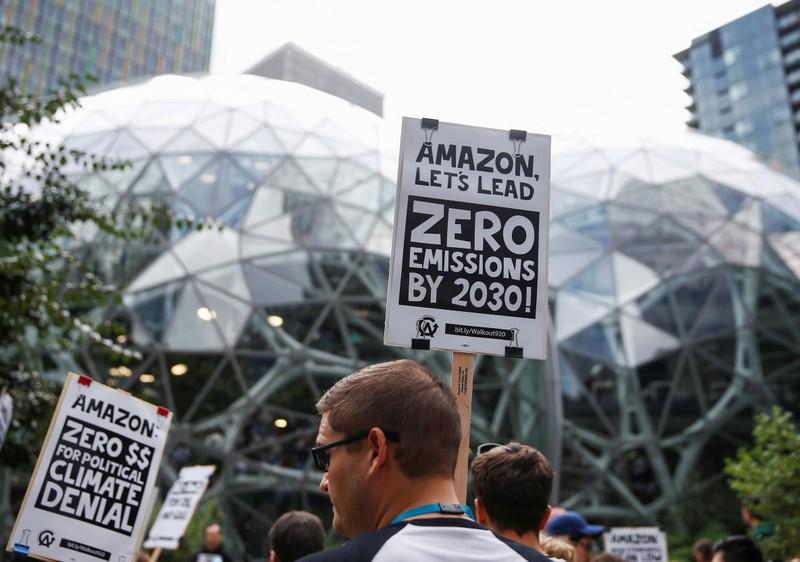 By Joseph Menn and Jeffrey Dastin

SAN FRANCISCO (Reuters) - Hundreds of workers from Google, Amazon and other technology companies on Friday joined climate-change marches in San Francisco and Seattle, saying their employers had been too slow to tackle global warming and needed to take more drastic action.

While students set the global agenda and led local marches, U.S. West Coast tech workers said they turned out in support and called on makers of software and hardware as well as providers of services such as cloud data storage to do more.

The marches cap a week in which Alphabet Inc's

"We're out on the streets because we want them to do more," said Danilo Quilaton, 34, a product designer for Amazon's video streaming subsidiary Twitch. He called Thursday's pledge by his company a big win.

"Amazon promised some things, but we still have to hold them liable," said Quilaton, who held a sign that read, "I work at Amazon. I want zero deals with oil & gas" companies.

The number of people carrying signs referring to tech companies and shouting tech-related slogans on the streets of San Francisco and Seattle numbered in the hundreds or low thousands, a fraction of the tech workforce. But their presence was bigger than in past protests and represented a change in an industry whose engineers have often focussed on their work, rather than social issues.

"Amazon, let’s raise the bar not the temperature," read one protester's sign outside the glass domes at Amazon's headquarters in Seattle known as the Spheres, local symbols of the industry's wealth.

"Tech is having an awakening," said Google business analyst Marie Collins in San Francisco. "Tech workers are realizing they have to take collective action."

One sign with the hashtag #techwontbuildit called for zero emissions by 2030, no deals to provide technology to oil and gas companies and zero corporate sponsorships of groups that deny climate change, echoing internal petitions at the big companies.

The coordination across various companies paralleled recent joint efforts by staff to oppose work on military contracts, support immigrants and other issues.

The companies have signalled sympathy with workers on addressing climate change. But Amazon Chief Executive Jeff Bezos on Thursday said it would be a bad idea to leave the cloud company's oil and gas customers with outdated tools as they are trying to evolve their businesses.

An Amazon spokeswoman on Friday said the company understands that some employees feel strongly about climate change and so does Amazon. Google, which on Thursday announced its clean energy deals, did not immediately return a request for comment.

Though much of the public thinks of technology as a clean industry, unlike transportation or mainstream manufacturing, the employees said soaring electricity consumption for the data centres used in cloud computing was a major problem.

(Additional reporting by Lindsey Wasson in Seattle and Kate Munsch in San Francisco; writing by By Peter Henderson; Editing by Cynthia Osterman)