In succession clue, Kazakh leader's daughter elevated after his resignation

ASTANA (Reuters) - Kazakhstan took a step closer to a carefully choreographed dynastic succession on Wednesday as the daughter of its long-serving ruler was named to a post that put her in line for the presidency a day after her father stepped down. Nursultan Nazarbayev, the only ruler Kazakhstan has known since the Soviet era, resigned as president on Tuesday, automatically making his loyalist parliament speaker Kassym-Jomart Tokayev president in his place. 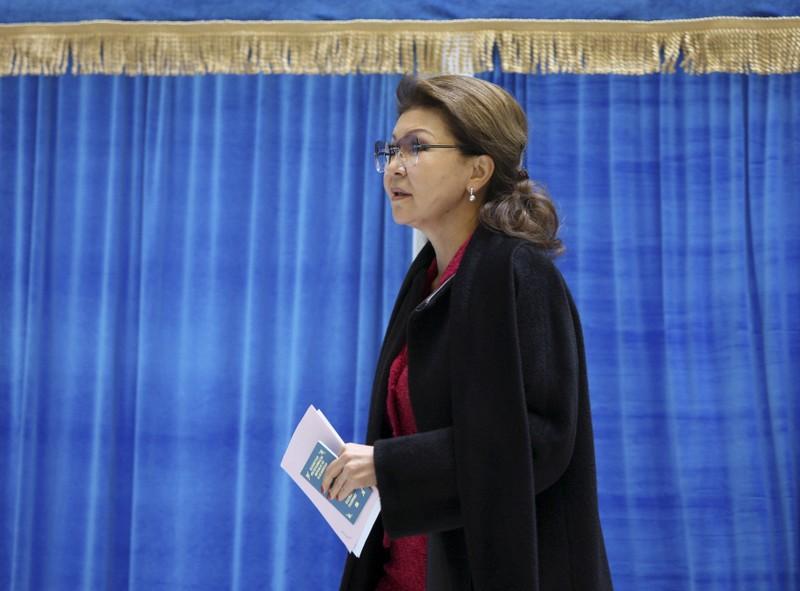 ASTANA (Reuters) - Kazakhstan took a step closer to a carefully choreographed dynastic succession on Wednesday as the daughter of its long-serving ruler was named to a post that put her in line for the presidency a day after her father stepped down.

Nursultan Nazarbayev, the only ruler Kazakhstan has known since the Soviet era, resigned as president on Tuesday, automatically making his loyalist parliament speaker Kassym-Jomart Tokayev president in his place.

But Nazarbayev kept other senior decision-making posts. And as his first act in office, new President Tokayev nominated the 78-year-old leader's 55-year-old daughter Dariga as speaker of the senate, meaning she would automatically become president if Tokayev were to leave office before an election next year.

Her nomination was then unanimously confirmed by the Senate.

Nazarbayev was the last Soviet-era communist boss still in power in a former Soviet state until his decision to step down this week. If his daughter eventually follows him into power, it would be only the second successful dynastic succession in an ex-Soviet state, after Ilham Aliyev followed his father Heydar into power in Azerbaijan.

In an inauguration speech, the new president made clear he intended to continue to serve Nazarbayev, who retains posts including those of head of the powerful security council and leader of the ruling party.

The capital Astana is to be renamed Nursultan in Nazarbayev's honour, Tokayev said. Nazarbayev's "opinion will have special, one might say priority, importance in developing and making strategic decisions".

Tokayev, a 65-year-old career diplomat fluent in Russian, English and Chinese, now has a mandate to serve out the final year of Nazarbayev's term. The more permanent successor is then expected to be the candidate Nazarbayev selects to represent his Nur Otan party in an election in April next year.

"The real contest will be fought inside the corridors of power rather in public," said Chris Weafer, senior partner the Moscow-based Macro-Advisory Ltd consultancy.

"The candidate supported by the Nur Otan party and, presumably, endorsed by Nazarbayev, will win the election. There is no realistic possibility for surprise given the political structures in Kazakhstan."

Nazarbayev praised Tokayev on Tuesday as "a man who can be trusted to lead Kazakhstan".

Russian President Vladimir Putin congratulated Tokayev on Wednesday, praising his "big personal contribution to the strengthening of the ties of strategic partnership and alliance between our countries".

Nazarbayev has been a close ally of Putin, while also maintaining warm relations with China and successful business ties with Western companies that have helped Kazakhstan exploit huge oil and gas resources, making it one of the most prosperous former Soviet states in terms of output per capita.

While his rule has been firm and political opposition all but negligible, Kazakhstan has not faced the same degree of criticism over human rights as neighbours Uzbekistan and Turkmenistan, or unrest that plagued Kyrgyzstan and Tajikistan.

But critics say he should have done more to create a stable political system less dependent on the rule of a single man.

His daughter Dariga Nazarbayeva has in the past led Kazakhstan's main television station and served as a deputy prime minister, while also devoting time to a passion for opera, which she has performed publicly.

She made no mention of the upcoming elections in her brief speech on Wednesday accepting the speaker's post. While her elevation appears to increase the odds she will take over one day, she is not the only potential heir.

Another extended family member, Nazarbayev's nephew Samat Abish, is also regarded as a candidate after his meteoric rise through the ranks of state security, where he has held the No. 2 post since 2015. Abish, however, keeps a low public profile.

The head of state security, Karim Masimov, although not a family member, is also close to Nazarbayev, having served as chief of staff and twice as prime minister. The present prime minister, Askar Mamin, was Masimov's school classmate.

Some analysts believe there could be a collective succession, a troika- or politburo-style arrangement, after Kazakhstan amended its constitution in 2017 to reduce presidential powers in favour of lawmakers and the cabinet.

"What we expect to see in coming years and decades is a gradual transformation towards a system that is less reliant on one strong figurehead," said Charles Robertson, global chief economist at Renaissance Capital.

But there are doubts whether such a structure would be stable, given recent examples in Uzbekistan and Kyrgyzstan where new leaders moved quickly to eliminate other key players.

In any case, major concerns for investors will be uncertainty and a shift from long-term structural reforms towards populist policies, which began last year when the government unexpectedly froze utility tariffs, putting companies' long-term investment plans at risk.

"There is obviously pressure on the regime to improve living standards... and to a certain extent they have some resources to do that," said Stuart Culverhouse, chief economist at emerging market investment bank Exotix.