By Roberta Rampton and Steve Holland WASHINGTON (Reuters) - President Donald Trump on Thursday proposed overhauling the U.S. immigration system to favour young, educated, English-speaking applicants instead of people with family ties to Americans, a plan he will push in his 2020 re-election campaign but has little to no chance of being approved in Congress. Trump's plan, roundly panned by Democrats and immigration advocacy groups, is aimed at trying to unite Republicans - some who want to boost immigration, others who want to restrict it - ahead of next year's presidential and congressional elections. 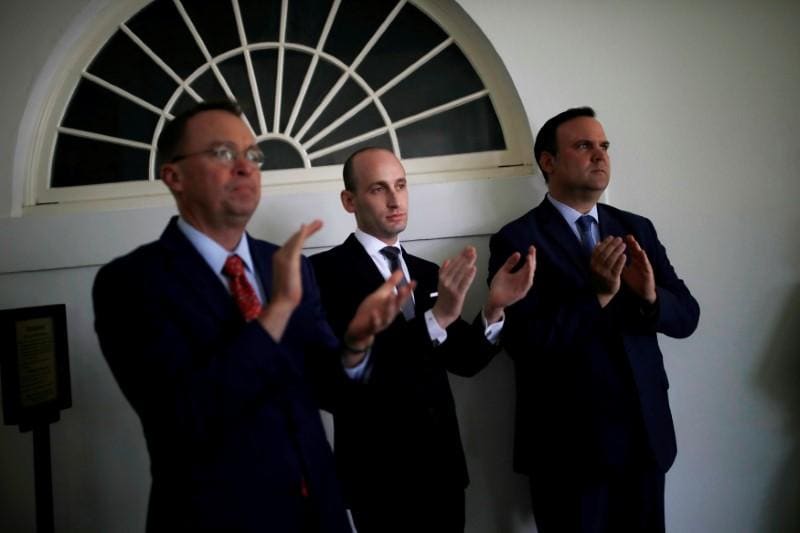 By Roberta Rampton and Steve Holland

WASHINGTON (Reuters) - President Donald Trump on Thursday proposed overhauling the U.S. immigration system to favour young, educated, English-speaking applicants instead of people with family ties to Americans, a plan he will push in his 2020 re-election campaign but has little to no chance of being approved in Congress.

Trump's plan, roundly panned by Democrats and immigration advocacy groups, is aimed at trying to unite Republicans - some who want to boost immigration, others who want to restrict it - ahead of next year's presidential and congressional elections.

"If for some reason, possibly political, we can't get the Democrats to approve this merit-based, high-security plan, then we will get it approved immediately after the election when we take back the House (of Representatives), keep the Senate, and, of course, hold the presidency," Trump said in a Rose Garden address to Republican lawmakers and Cabinet members.

Currently, about two-thirds of the 1.1 million people allowed to emigrate to the United States each year are given green cards granting permanent residency because of family ties.

Trump proposed keeping the overall numbers steady, but shifting to a "merit-based" system similar to one used in Canada - a plan he said would result in 57% of green cards being based on employment and skills.

He would also end a lottery system used to give applicants from countries with low immigration rates a chance to move to the United States.

"Companies are moving offices to other countries because our immigration rules prevent them from retaining highly skilled and even, if I might, totally brilliant people," Trump said.

It also does not include changes sought by business lobby groups to help farmers and other seasonal employers obtain more guest workers, or reforms for technology visa programs.

Democratic House Speaker Nancy Pelosi said Trump's plan was "dead on arrival" and said it was "not a remotely serious proposal."

The plan also drew concerns from hard-line groups that want to restrict immigration. "The fact that it does not even call for a modest reduction in total immigration, but instead offsets decreases with increases in 'skills-based' immigration, is very concerning," said Mark Krikorian, head of the Center for Immigration Studies.

Trump ran for office in 2016 pledging to build a wall on the southern U.S. border with Mexico to keep migrants out, and has fought Congress to get funding for it.

Trump's plan includes proposals to beef up security at the border to try to prevent people from crossing illegally and legal changes aimed at curbing a rise in Central American migrants seeking asylum.

It would also hike fees charged at the border to pay for improved infrastructure.

But the plan fell short of being the "comprehensive" approach that business, religious and immigration lobby groups alike have said is needed to get a deal that would get enough votes from Democrats and Republicans to clear Congress.

Democratic support would be needed to advance any legislation through the Republican-led Senate - let alone the Democratic-controlled House - making it unlikely that Trump's plan will move forward ahead of November 2020 elections.

"To say it's dead on arrival would be generous," said Pili Tobar, deputy director of America's Voice, a group that advocates for immigrants.

Republicans say they will try to move a package of measures through Congress to address a surge of mostly Central American families fleeing violence and poverty in their home countries and turning themselves in at the U.S. southern border.

Many of the families seek asylum, a claim Trump said is being abused. Because of limits on how long children can be detained, many migrants are released into the United States with a date to appear in immigration court.

Border facilities - like the overcrowded station at McAllen, Texas, where migrants sleep on the floor, sometimes for days, before being processed and released - have been overwhelmed.

A Guatemalan toddler who had been held in U.S. Border Patrol custody and then released died in a hospital this week, adding to the tally of children who have fallen ill or died on the border because of the harsh conditions of the journey and in detention.