...Birds. Everyone spoke of birds throughout the day. I couldn’t see them, but knew something unusual was up with them today. Were they wondering if the world had transformed into a paradise overnight? Just in case I needed a reminder in the future that this had really happened, I recorded 15 seconds of birdsong.

Around noon, another friend called to say she had just finished reading Joan Didion’s book The Year of Magical Thinking. You can tell she really understands grief, my friend said. Is there anyone who does not?

At 4.55 pm, faint, unrecognisable sounds were heard from outside. “Mamma, wake up, it’s begun,” I told my mother. From the window we watched our neighbours erupt into celebratory clamour. They clapped their hands and they banged their pans. A few days earlier, our Prime Minister had appealed to the nation to come out on to their balconies at 5 pm on the day of the Janta Curfew and cheer those on the frontlines of the pandemic. Downstairs, someone was blowing a conch shell. I asked him to look up so I could make a video but when he did, the spell was broken, and he made false notes.

What is this collective hysteria, I said aloud. My mother asked me not to be a spoilsport. She was right. This mass gathering made me smile. I even allowed myself to laugh heartily for a few minutes. It was the first time in weeks and it felt oddly uplifting. For a few moments, the apocalypse was forgotten. Just in case I needed a reminder in the future that this had really happened, I recorded 15 seconds of conching and clanging.

The birds went into hiding and were not heard from for the rest of the evening...

As the tenor of everyday life dimmed across the globe as a consequence of the coronavirus outbreak, Sunila Galappatti wondered if this unprecedented experience could be recorded in some way. The Sri Lanka-based dramaturg, theatre director and editor thought of an online Lockdown Journal — a way of “coming together when we can’t meet”, “asserting our solidarity with each other from a distance of at least two metres away”. The website, which went live on 20 March, archives journal accounts of these days, no matter where you are in the world.

“It didn’t feel like a very original idea but my instinct was to start something that suited the uncertainty of the time — a project with no clear ending,” Galappatti told Firstpost of how the project came about.

Memories of the past often open doors to the realities of the present — an observation Galappatti made note of when she came across a diary she had written in 1988/89, when schools in Sri Lanka were closed due to strife. “The mundane notes of a nine or 10-year-old about her day were much more interesting to read in retrospect for the way they spoke of a certain time,” she said.

The format or style of a journal entry would also counteract a peculiar feature of the modern condition: “Surrounded by instant comment, we forget sometimes about looking back and seeing things differently. I wanted to create a quiet place where we could tell stories of ourselves we may not understand till much later, until the world has changed again and we’re looking back.”

...On 1 September 1939, the day after war was declared, my mother arrived off the sleeper train at the local station. In the book I wrote which documented 100 years of this community, I described how on that first morning of the war my mother...

“...went straight to join the others at Glen Fyne Lodge. Then that morning she and Tasia, Michael, Sisi and the children and nannies moved down from The Lodge back to Ardkinglas; so evacuee families could go to the Lodge. It was thought that evacuees with mothers would need to use the Lodge and the Bungalow. None of the evacuees were to go to Ardkinglas; it was planned that the big houses were to be kept in case there was a sudden rush of evacuees later, or in case they were to be needed as hospitals or convalescent homes.”

At the time, my mother complained of numbness, of not being able to think. And how difficult it was living with all these people around.

It was hard for her and I am sure would have been for me too, but she felt that she and others had things they must do and people they had to provide for. While I have nothing to do except think about myself and my rhubarb patch... Lockdown Journal is not so much a project as a “gesture or an experiment” according to Galappatti, as she feels it is not an adequate chronicle of the current times.

“Most of us writing [for the Journal] have homes, food, a few weeks’ or months’ or even years’ worth of savings in the bank. We have enough health, income, time, sustenance and wherewithal to take shelter and keep a diary. We are neither critically ill nor caring for those who are,” she points out. Galappatti’s best hope for the Journal is that it “accumulates an interesting record”, while cautioning that “it makes no grand claims for itself”.

Galappatti has been working with writers for nearly 20 years — an experience that has held in good stead. From 20 March onwards, a bevy of collaborators have submitted accounts of their days wherever they might be in the world, in varying degrees of lockdowns. “Imagine you are keeping a journal of your life during this time – it would be like you’re sending us a page from that journal, say what you did on 3 April 2020, and the mood of that day in the place where you are,” Galappatti explained.

As for her selection criteria, Galappatti prefers “simply written, thoughtful entries…[which] will almost always win over self-consciously literary efforts”. What won’t be published? Entries deemed “too self-involved or offensive” or which she “cannot for some reason bear to inflict on other people”. Anyone can contribute — from children (provided they are old enough to articulate what is happening around them) to the elderly.

The volume of entries is increasing: From just three entries to kickstart the website on 20 March, today at least 10 contributions come in per day. What must be noted is that Lockdown Journal is managed, edited and published every day by a single person — Galappatti herself.

“I laugh when I get submissions addressed ‘Dear Team’,” she said. “There is just me at this end, trying to do this while keeping a promise to myself that I won’t let it rob too much of the time I have to spend with my husband and three-year-old son. After all, we’re all at home together, and this is not a time to live distractedly.”

A few days ago my husband reported to me a conversation with our son. He told me because he knew I would want to know. Also, I had been in the room with them at that time — where else would I be?

Kavan, nearly three, had apparently tried to speak to me several times but I had not responded. He asked his father, ‘Does Amma not hear me?’

‘I think she is distracted,’ his father replied.

‘Why is she distracted?’

‘Because of the coronavirus’.

You can imagine how I felt, hearing about this exchange — how I resolved to be more present the next day and partially succeeded. This is how it is, we go back and forth, partially succeeding. 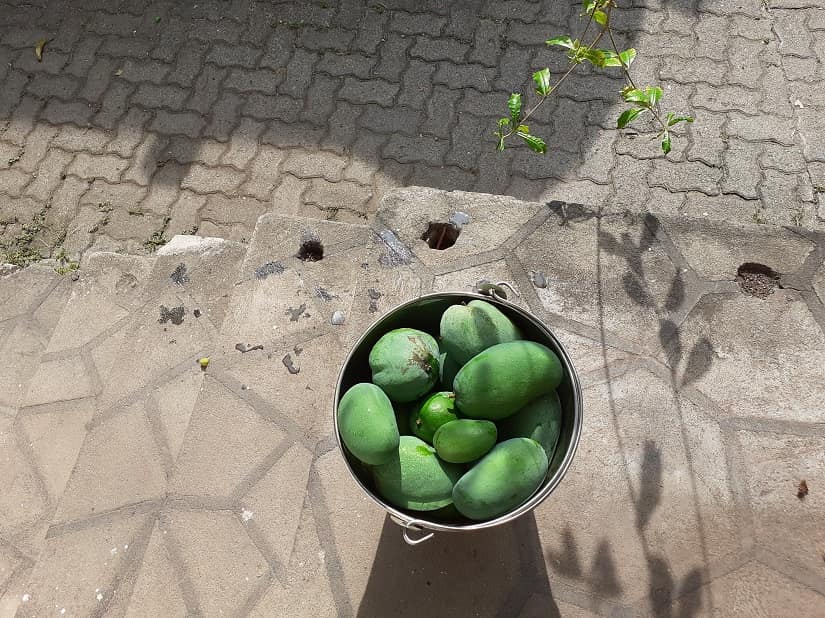 In these uncertain times, the response to the Lockdown Journal wasn’t something Galappatti even envisaged. “If you told me that within 10 days of getting up a basic site I would be doing press interviews about it, I would have laughed at you,” she said. “But importantly, I am starting to get more entries from strangers than friends and friends-of-friends. People have said they’ve enjoyed reading the entries and writing them.”

So far the entries on the site are from Sri Lanka, India, UK, Germany, Portugal, Jamaica, Jordan, Nigeria, Kenya, US, Canada, Australia, and UAE, among others. Nurat Maqbool from Singapore/Bengaluru says she wrote for Lockdown Journal because she liked the idea of sharing her day with hundreds of people in a similar situation. “It is not easy to write about your day when nothing really happens. So I have to put my emotions where so much is happening all day long,” she says. “It’s good to read about people far and near in the same situation but with entirely different lives. And this is not fiction but a peek into real people’s lives.”

“Normally I don't keep a diary but in this particular situation, it felt good to note down my thoughts. My entry is from the beginning of the lockdown phase in Germany when I was still in the process of adjusting to the new situation,” says Susanne Wieners from Germany. “In many ways, it is comforting to read other entries on this site as it becomes clear that we’re all dealing with similar emotions and issues during this time. On another level, reading new posts every day has simply become a pleasant new routine.”

UK-based Antonia Lloyd echoes a similar sentiment. “At a time when everything feels out of control, I found it comforting to order and formulate my thoughts in a structured journal entry,” Lloyd says, adding how this also offered an important moment to reflect. “I loved reading other people’s entries — it made me feel a sense of solidarity with people across the world experiencing similar emotions, familiar challenges and facing this unprecedented time with strength and honesty.”

Australia’s Mel Wicks thinks Lockdown Journal could be “a unique and organic snapshot of an unprecedented event from so many different perspectives and cultures,” to which Nurat Maqbool adds, “I think it will be like a global memory bank where we put our memories to look back one day and see how we get by the greatest test of our times.”

As for Galappatti and her vision for Lockdown Journal, her greatest fear was that it would become a repository for the self-indulgent reflections of the most comfortable people. “But what resonates across the entries,” she mused, “is how the young are worried for their elders — and how elders are not used to thinking of themselves as such.” It’s only just the beginning of this new normal but already our London home seems stifling. After our first week of juggling working from home, a myriad of Zoom video calls, and keeping our seven and four-year-olds entertained (and vaguely educated), we thought we’d get out for the day and get some ‘fresh air’. A quick Google revealed the National Trust’s Ashridge Estate, an hour out of London, with 5000 acres that could surely provide ample room for social distancing.

We arrived at 11 am and found ourselves walking through ancient woodland, a carpet of newly-sprouted wild garlic and the promise of Spring’s tendrils preparing to unfurl. I lay down on a large tree trunk and looked up at the swaying branches, then closed my eyes to try and make out birdsong — for all of 30 seconds before my son asked for help whittling a stick with a dangerously sharp implement (this is not a time for him to have a severe cut I think to myself). Perhaps finally in these months of confinement, I can learn to identify bird calls, mushrooms and other edible plants. We pass areas of coppiced sweet chestnut, Douglas Firs and a myriad of other trees I know nothing about but at various intervals, we come across enormous trunks that have fallen over in this year’s storms. They lay here and there like uninvited bodies, their messy branches splayed over other trees — beautifully sculptural but interrupting the order of the landscape. But then, our whole worldview has irrevocably changed now.