By Giulia Paravicini ADDIS ABABA (Reuters) - The leader of Ethiopia's rebellious Tigray region confirmed on Sunday that his forces had fired rockets at the airport in Eritrea's capital, a major escalation that raises fears of a wider war in the Horn of Africa region. Accusing neighbouring Eritrea of sending tanks and thousands of troops into Tigray in support of an Ethiopian government offensive, Debretsion Gebremichael said his forces were under attack 'on several fronts.' 'Our country is attacking us with a foreign country, Eritrea. 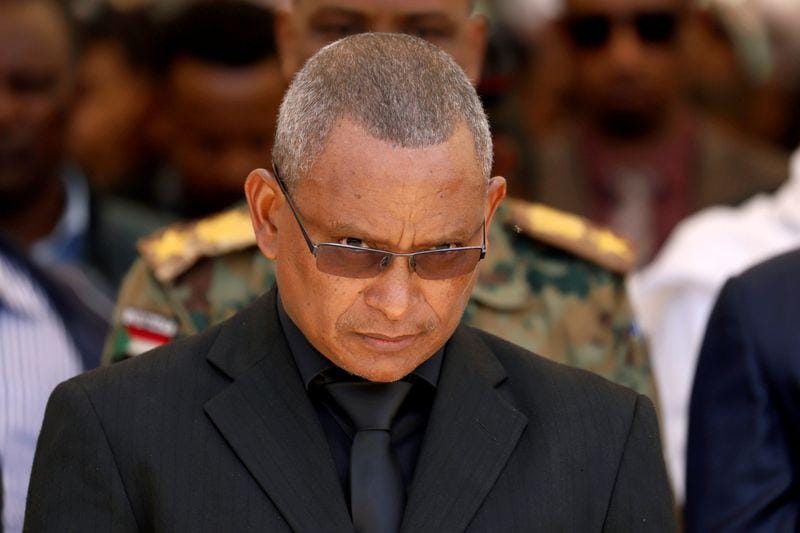 ADDIS ABABA (Reuters) - The leader of Ethiopia's rebellious Tigray region confirmed on Sunday that his forces had fired rockets at the airport in Eritrea's capital, a major escalation that raises fears of a wider war in the Horn of Africa region.

Accusing neighbouring Eritrea of sending tanks and thousands of troops into Tigray in support of an Ethiopian government offensive, Debretsion Gebremichael said his forces were under attack "on several fronts."

"Our country is attacking us with a foreign country, Eritrea. Treason!," Debretsion said in text messages to Reuters, without providing further details or evidence of his claims.

With access restricted and most communications down in Tigray, Reuters could not independently verify assertions made by all sides about the 12-day conflict.

Government officials in Eritrea and the Ethiopian capital Addis Ababa could not be reached for comment.

Prime Minster Abiy Ahmed tweeted Sunday that Ethiopia was more than capable of achieving its objectives in Tigray "by itself" but did not specifically address Debretsion's claims.

Abiy launched the campaign in Tigray on Nov. 4 after accusing local forces of attacking federal troops based in the northern state, which borders Eritrea and Sudan and is home to some 5 million people.

The government accuses Tigray's leaders of treason and says its military operations are aimed at restoring the rule of law. Tigrayans dominated the governing coalition before Abiy, an Oromo, came to power in 2018. They say he has marginalised them since, which Abiy denies.

The conflict has killed hundreds on both sides and threatens to destabilize other parts of Ethiopia and the Horn of Africa. At least 20,000 Ethiopians have fled into Sudan, the United Nations said on Sunday.

The International Crisis Group, a think-tank, warned on Nov. 5 that any involvement by Eritrea in the conflict could in turn draw in Sudan.

Egypt and Sudan launched a joint military exercise on Saturday, according to Egypt's defence ministry. The neighbours are deepening their ties amid a dispute with Ethiopia over the giant dam that Ethiopia is building on the Blue Nile.

Mehari Taddele Meru, a professor at the European University Institute, said the conflict would "turn the Horn of Africa into an international theatre of war" and that by drawing in rival regional forces it would "change the nature and terms of the proxy wars already being fought in Yemen, North Africa and the Middle East.”

Eritrea and Ethiopia fought a devastating 1998-2000 war. Abiy won a Nobel Peace Prize last year for making peace with Ethiopia's neighbour, but Eritrea's government remains hostile to the Tigray leadership after their leading role in that war.

Five regional diplomats told Reuters that at least three rockets were fired at Eritrea's capital from Ethiopia on Saturday night.

At least two of the rockets hit Asmara airport, three of the diplomats said. However, the U.S. Embassy in Asmara said in an alert to U.S. citizens on Sunday that there was no indication the airport had been hit.

Debretsion told Reuters that Eritrea had sent 16 divisions to Ethiopia but did not provide specific troop numbers. Eritrea has a vast standing army which the United States' CIA puts at 200,000 personnel.

"Abiy is now enlisting the support of UAE drones based in Assab in his devastating war against the people of Tigray," party spokesman Getachew Reda said in a tweet on Sunday.

Reuters could not independently confirm that and UAE officials did not respond to requests for comment.

Several Ethiopian refugees arriving in the Sudanese town of Hamdayat told Reuters on Saturday that their areas had been shelled from Eritrea. Reuters could not independently verify this.

"We were shelled by artillery volleys from across the Eritrean border," said Naksiam Guru, a 22-year-old refugee.

Fighting has spilled into Ethiopia's Amhara state, whose local forces are fighting with federal troops in Tigray. Late on Friday, rockets were fired at two airports in Amhara in what the TPLF said was retaliation for government air strikes.