If world handles climate like COVID-19, U.N. chief says: 'I fear the worst'

By Michelle Nichols NEW YORK (Reuters) - The United States, China and Russia fought on Thursday during a United Nations Security Council meeting on the coronavirus pandemic after U.N. 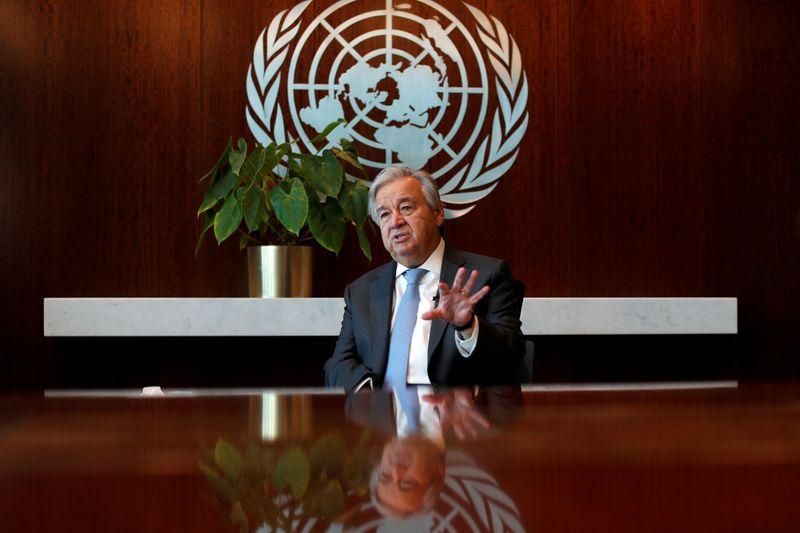 NEW YORK (Reuters) - The United States, China and Russia fought on Thursday during a United Nations Security Council meeting on the coronavirus pandemic after U.N. chief Antonio Guterres had warned the body that if the climate crisis was approached with the "same disunity and disarray" of COVID-19, then: "I fear the worst."

Guterres said the coronavirus was out of control as the global death toll approaches 1 million, while more than 30 million have been infected. He blamed "a lack of global preparedness, cooperation, unity and solidarity."

"The pandemic is a clear test of international cooperation – a test we have essentially failed," he told the 15-member body.

Russian Foreign Minister Sergey Lavrov and the Chinese government's top diplomat, Wang Yi, both took veiled swipes at the United States during the virtual council meeting on global governance post-COVID-19, to which U.S. Ambassador Kelly Craft responded: "Shame on each of you."

"I am astonished and I am disgusted by the content of today's discussion ... members of the council who took this opportunity to focus on political grudges rather than the critical issue at hand," she said.

While not naming any countries, Lavrov noted that the pandemic had deepened differences between states.

"We see attempts on the part of individual countries to use the current situation in order to move forward their narrow interests of the moment, in order to settle the score with an undesirable government or geopolitical competitors," he said.

Long-simmering tensions between the United States and China hit the boiling point over the pandemic, spotlighting Beijing's bid for greater multilateral influence in a challenge to Washington's traditional leadership.

Wang called for better coordination and cooperation among key powers on Thursday.

"Major countries are even more duty-bound to put the future of humankind first, discard Cold War mentality and ideological bias, and come together in the spirit or partnership to tide over the difficulties," he said.

U.S. President Donald Trump is facing a Nov. 3 re-election battle as the United States is dealing with the world's highest official number of deaths and infections from the coronavirus. Washington accuses Beijing of a lack of transparency that it says worsened the outbreak. China denies the U.S. assertions.

Craft reiterated those accusations on Thursday, echoing a call by Trump for the world body to hold China accountable.

China's U.N. Ambassador Zhang Jun rejected her accusations and said: "Enough is enough. You have created enough troubles for the world already. ... The U.S. should understand that blaming others will not solve its own problems."

French Foreign Minister Jean-Yves Le Drian also appeared to take a stab at the United States when he said the pandemic should not be used to undermine "all the work has been done over recent decades by feminist movements for gender equality."

"We must be on our guard, we must be watchful, particularly when it comes to protecting sexual reproductive rights," he told the Security Council.

Trump's administration has led a push at the United Nations against the promotion of sexual and reproductive health rights and services for women because it sees that as code for abortion. Earlier this month, the United States voted against a U.N. General Assembly resolution on the coronavirus pandemic partly because it included such language.