'I was not afraid': Swiss woman, 95, back home after surviving coronavirus

By Cecile Mantovani LE LOCLE, Switzerland (Reuters) - A 95-year-old Swiss woman was back home and online with her 10 grandchildren and 11 great-grandchidren on Friday after recovering from a week in intensive care with COVID-19. 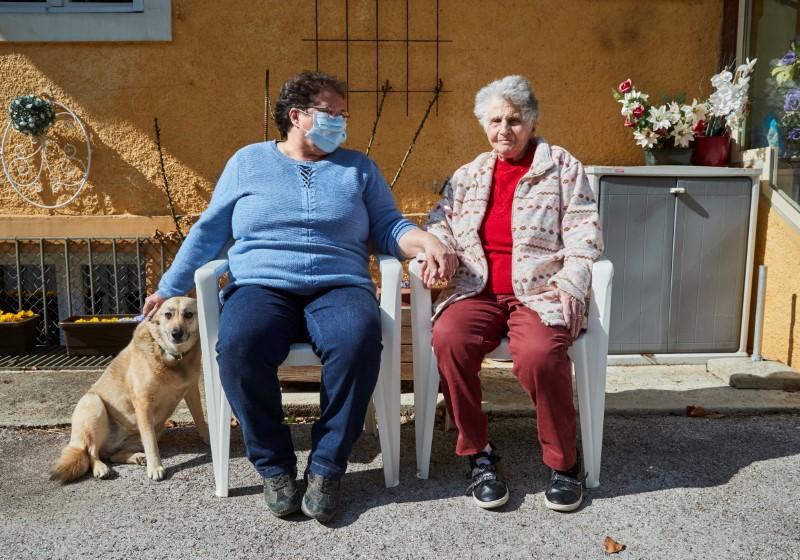 LE LOCLE, Switzerland (Reuters) - A 95-year-old Swiss woman was back home and online with her 10 grandchildren and 11 great-grandchidren on Friday after recovering from a week in intensive care with COVID-19.

Gertrude Fatton told Reuters she had been treated in an isolation room and at one point refused to be intubated to help her breathing.

"Not at my age, don't intubate me. I have lived my life and I told them 'Let me go peacefully'."

After a week of treatment with antibiotics and the malaria medicine chloroquine, she said was now happy to be back home in the western French-speaking canton of Neuchatel with her cat and her family.

"I hope to get back enough strength to live a bit longer. I have grandchildren, great-grandchildren, I would like to see and hear them. I chat with them over internet, on my iPad."

Fatton said she had been sick in bed at home in the town of Le Locle for a week before developing breathing problems. An ambulance rushed her to hospital in La Chaux-de-Fonds.

"They took my blood and my blood pressure. They put antibiotics directly in my veins three times a day. It was very difficult but it was ok," she said.

Fatton, who uses a walker, told Reuters she had been healthy all her life, though she took blood pressure medicine and occasional cough syrup for bronchitis.

Her daughter Jacqueline Fatton recalled: "When the doctor called to tell me that the oxygen in her blood was dropping and they had 24 hours to stop it, I was really, really afraid and thought I would lose her that night.

"The next day the doctors said 'we are going to go for it and try all the medicines that we can'... By the third day, the oxygen was back up and the drugs worked extremely well.

"I could call twice a day with the cell phone. When I saw that she could speak to me without coughing much, I knew that we had won," Jacqueline said.

The Swiss death toll from the coronavirus reached 197 people on Friday and the number of cases rose to 12,161, the health ministry said.