I shall keep working: How Somalian journalists do their job despite threats

MogaDishu, Somalia: For Abdiqadir Dulyar, simply reading messages sent to his phone can be chilling.

His voice breaks as he reads a recent one: "Keep doing what you do, and we shall come to give your well-deserved award (death)."

Dulyar, the 40-year-old director of the Somali TV station Horn Cable, said the threats often lead him to avoid going home and to stay at his office for weeks at a time.

He said his fear was heightened last week after unidentified men opened fire on a car carrying journalists from his TV station in the capital of Mogadishu. No one was hurt. 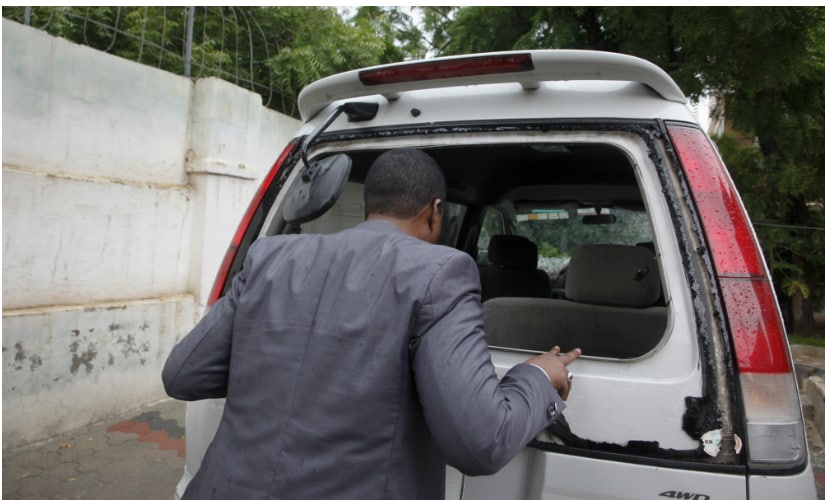 Abdiqadir Dulyar, director of Horn Cable, looks at the smashed window of a car that was carrying journalists working for his station, that unidentified gunmen opened fire on last week, in Mogadishu, Somalia. AP

Somali journalists frequently receive threats, with many being killed. But police rarely investigate them or adequately protect reporters, according to Human Rights Watch, which on Tuesday marked World Press Freedom Day by issuing a report on the dangers faced by Somali journalists.

The deadliest country for journalists in 2015 was Syria, where 14 were killed, followed by France with nine, according to the Committee to Protect Journalists. Around the world, 72 journalists were killed in 2015 and 10 have been killed so far this year.

Turkey's main journalism association called World Press Freedom Day one for reflection, solidarity and "finding a way out" of the rapidly deteriorating state of media freedom in the country. Since January, the government seized the largest circulation opposition newspaper; two journalists were put on trial for spying for their reports on alleged government arms smuggling to Syrian rebels; and several pro-Kurdish journalists were detained over their reports on fighting between government forces and the Kurdish rebels.

Turkish academic and columnist Murat Belge went on trial Tuesday, accused of insulting President Recep Tayyip Erdogan in a column that suggested he reignited a conflict against Kurdish rebels for electoral gains. Belge faces four years in prison if convicted under a law that critics say Erdogan is using to muzzle dissent.

"I am a member of one of Turkey's most populous clubs — the club of people who have insulted Erdogan," Belge said at the end of the hearing. Almost 2,000 cases have been opened against people, including journalists.

"The conditions are not there for the Turkish media to celebrate this important day," said Nazmi Bilgin of the Turkish Journalists' Association. "It is not possible to celebrate freedom when you are not free." Bilgin said 720 journalists had been fired this year, while more than 100,000 websites have been blocked.

In Somalia, which for years has been one of the most dangerous countries for media workers, 59 journalists have been killed since 1992, soon after a civil war began in the Horn of Africa nation, according to the CPJ. The deadliest year was 2012 when 18 were killed. In 2015, three journalists were killed, including Hindia Haji Mohamed, who worked for the state-run broadcaster and had been married to a journalist who also had been slain. She died in December when her car was bombed, an attack claimed by the Islamic extremist group al-Shabab.

The killings of Somali media workers often happen in government-controlled areas that journalists generally consider safe, and reporters must be on their guard at all times. It does not help that they also might face hostility from the government, said Human Rights Watch. Hassan Hanafi Haji, center, a former journalist accused of belonging to al-Shabab and involvement in the killings of five Somali journalists, is tied to a wooden post as he is prepared to be executed by firing squad, at a police academy in Somalia on 11 April. AP

There are signs the Somali government is protecting journalists better. Last month, the government executed a man convicted of assisting the killing of five journalists. A former journalist himself, the man had joined al-Shabab to work as their press liaison and was known to have threatened reporters. He was one of the few prosecuted by the government, which has been urged for years by rights groups to do more to protect journalists.

Despite relative stability in Mogadishu since the ouster of al-Shabab in 2011, journalists say they still feel unsafe from both militants and government officials. Although African Union troops have helped to push Islamist extremists out of all Somalia's major cities, the rebels still carry out numerous attacks, hampering the government's rebuilding efforts.

"There is the prospect of having a Somali free from oppression, but threats and intimidation against journalists continue and it is very grim — no group or government likes our work," said Dulyar, the broadcast journalist. Despite the dangers, Dulyar said he remains committed to his job.

"No matter what, I shall keep working," he said. "I shall remain being a messenger for the whole world."